Why You Should Never Cross Your Arms Again

Get a glimpse of how to overcome the mental and physical fatigue that is standing between you and your full potential.
Leo Widrich
Co-founder and COO of Buffer
June 18, 2014 8 min read
This story originally appeared on Buffer


Body language is older and more innate for us as humans than even language or facial expressions. That’s why people born blind can perform the same body language expressions as people who can see. They come pre-programmed with our brains.

I’ve always been incredibly fascinated with body language and how it helps us achieve our goals in life. The power of body language is probably best described by Amy Cuddy’s famous quote:

“Our nonverbals govern how other people think and feel about us.”

If you are anything like me, then you’ve had a healthy obsession with body language for some time. In recent years, a few fascinating studies at Harvard, Princeton and other top universities shed new light on body language and how to use it at work. So whilst the power of language is extremely important to convey the right message. The power of body language however, might be the determining factor of how someone makes us feel.

Here is an insight into some of the latest studies on how we can use body language to our advantage in every day life.

Your body expresses emotion better than your face

We all grow up learning how to deal with each other based on facial expressions. And yet, that might not at all be the best way to judge other people’s emotions.

Researchers from Princeton performed a very simple experiment. They asked study participants to judge from photography whether that person is feeling joy, loss, victory or pain. Now some photographs showed facial expressions only, some showed body language and some both.

Have a go yourself at the following picture and try to say whether the tennis player’s faces on the right enjoy victory or loss: 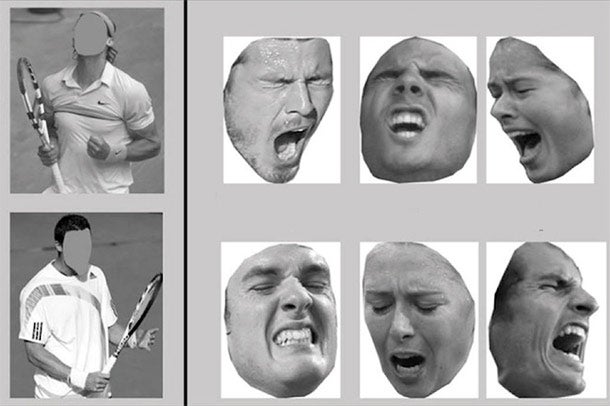 And the results couldn’t be any more startling:

“In four separate experiments, participants more accurately guessed the pictured emotion based on body language — alone or combined with facial expressions — than on facial context alone.”

Extremely positive and extremely negative emotions are especially hard to distinguish from each other, explains head researcher Todorov.

Now, it gets even more interesting. Body language isn’t just something we have to learn. Most emotional expressions come built into our system. For example, scientists from British Columbia observed congenitally blind people at the Paralympics.

In this example, the left athlete can see, whereas the right athlete is congenitally blind. Yet, after winning, both express the same body language for victory: 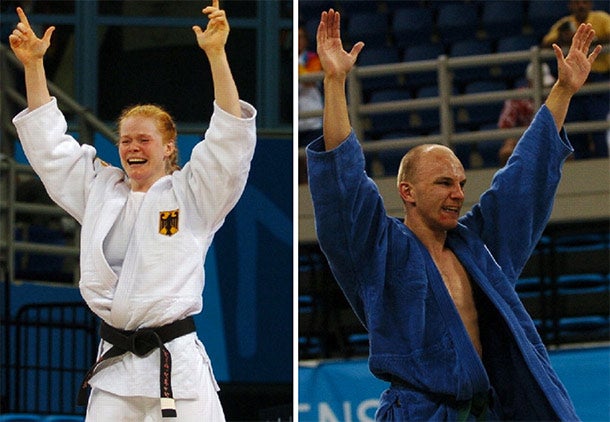 So, if body language is both so ancient and ingrained and also so powerful to express our true emotions, how can we use it better in our every day lives to achieve what we want?

Amy Cuddy from Harvard has answers for us:

Body language changes who you are – literally

In one of my favorite Ted Talks, Amy Cuddy explains some of the most peculiar happenings of body language. Cuddy focuses a lot on the business world and how body language is helpful for us here and the possibilities seem to have no boundaries.

Cuddy distinguishes between 2 different types of body postures. One are powerful poses, and their counter part are powerless ones. Here is an example of a powerful pose: 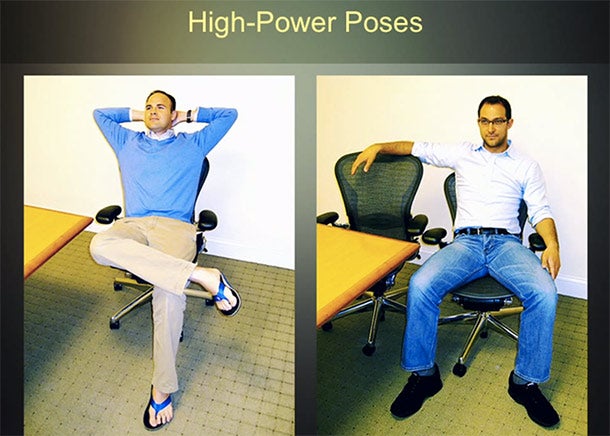 And here is an example of a powerless one: 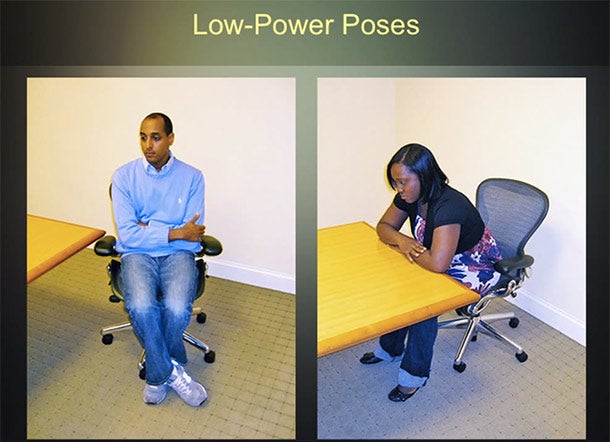 Now Cuddy’s research reveals a bunch of extremely interesting things. The first is that expressing more powerful poses helps us get better jobs, makes us feel better and makes us overall more successful.

And yet, it goes a lot further than to just change the positing of your legs or arms. Cuddy explains that inside our bodies, actual changes are happening as our body language changes. These changes largely have to do with hormones.

The two hormones in question are:

Here is what Cuddy’s experiment contained:

They brought people into a room. For two minutes, they would either perform a powerful pose or a powerless pose. Then they would go on into performing a job interview. The results were absolutely stunning:

Neutral recruiters, who didn’t know who performed which pose, consistently picked only those that previously performed the powerful poses as people they would want to hire.

On top of that, the actual hormone levels of people changed dramatically. Here is the increase in testosterone and drop in cortisol after performing the power-pose (for just 2 minutes!): 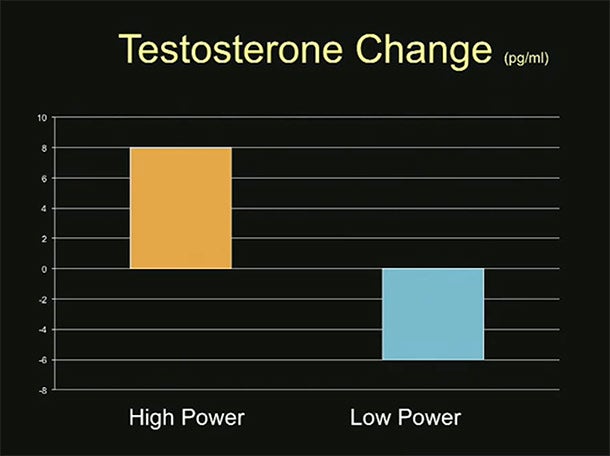 And here are the hormone levels after performing the powerless-pose, with a significant drop in testosterone and increase in cortisol: 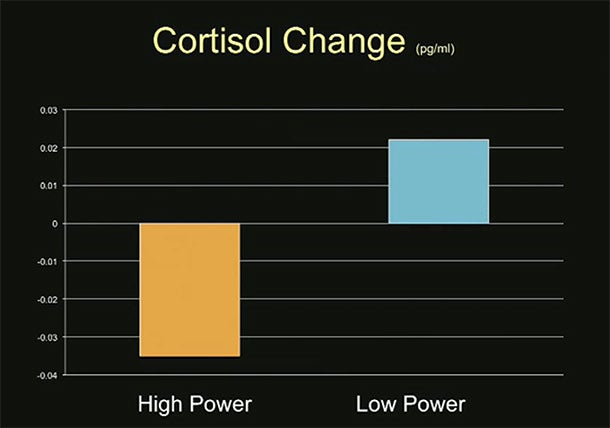 According to Cuddy, here findings show that changing our body language doesn’t just change our outcomes. It changes who we are as people. So instead of “faking until you make it”, her advice is:

Fake it until you become it.

Can you fake it until you make it? Yes, here are 5 postures to work on today to answer the question “How can I improve my body language”:

“How can I improve my body language?” – Here are 5 postures to work on

1.) Focus on the position of your feet

Carol Kinsey Goman has researched the importance of body language in the workplace for many years. One of her best tips is to watch your feet. A lot of the time, we focus on our upper body or faces, yet our feet reveal more about our emotions than we might think:

“When you approach 2 people talking, you will be acknowledged in one of two ways. If the feet of your two colleagues stay in place and they twist only their upper torsos in your direction, they don’t really want you to join the conversation. But if their feet open to include you then you know that you are truly invited to participate.”

In another example from her book Goman explains when to know that “conversations are over”:

Whenever you are speaking with a co-worker who seems to be paying attention, and whose upper body is angled toward you, but whose legs and feet have turned toward the door – realize that the conversation is over. Her feet are telling you she wants to leave. Foot positions are revealing even if someone’s legs are crossed.

I’ve started to experiment this at the Buffer office too. Whenever I speak with someone I make sure to give them my full attention – head til toe. So far, it’s been a great experience.

We smile because we are happy. But does it work the other way around too? Researchers at Cardiff University think so. People who smile, without actually feeling happy, can make themselves feel a lot happier, says Michael Lewis, a co-author of the study:

“It would appear that the way we feel emotions isn’t just restricted to our brain—there are parts of our bodies that help and reinforce the feelings we’re having,”

Of course, being able to smile well is a whole other story. For now, give it a try to smile in the restroom or in another quiet place before a difficult conversation, job interview or meeting. It might just make you more successful.

Amy Cuddy suggests 3 distinct power poses to practice for 2-3 minutes before you have an important conversation.

Try them next time in a quiet place and see if they have the same results for you: 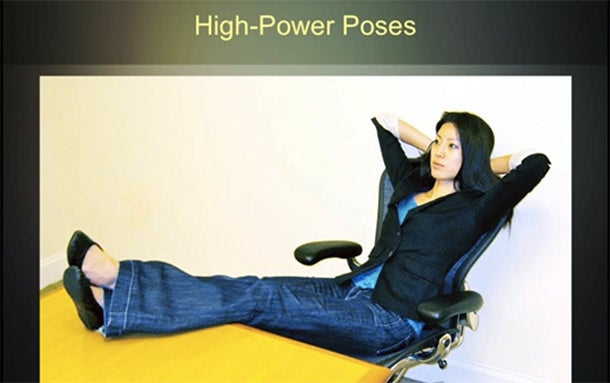 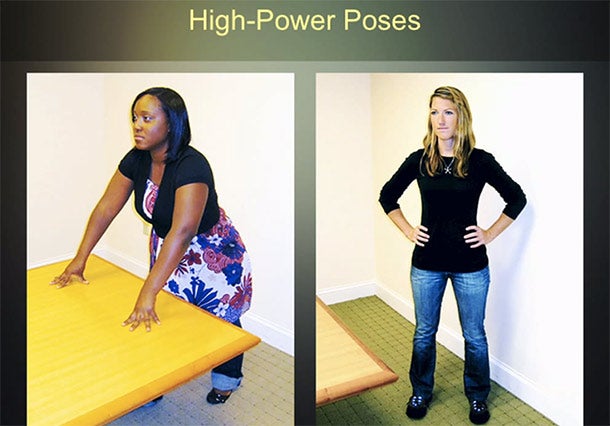 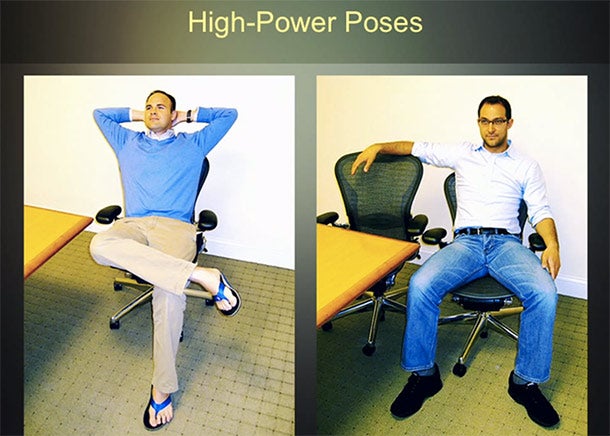 4.) Realign your body more congenially with your conversation partner

Another great tip from Goman mentions that if you try to align yourself more congenially with a conversation partner you will be able to solve tension in conversations and come to solutions more quickly:

“If you physically align yourself with that person (sitting or standing shoulder to shoulder facing the same direction), you will defuse the situation. “

I’ve found this especially true with meeting people you’ve never met before. It’s hard to build rapport at the start, focusing on aligning can make a big difference. Give it a try.

5.) Lower your voice with deep breathing

Although not a specific tip for body posture, this is one of my favorite tips. Men and women with deeper voices are more likely to land in leadership positions and are generally perceived as a greater authority.

To lower your voice, especially before an interview, try to take some deep belly breaths. It will relax your throat area, which generally contracts and raises the pitch of your voice.

5 Body Language Mistakes You Should Avoid at Work