Remember at BlackBerry's height when people referred to the company as CrackBerry because of how devoted (and addicted) users were to their devices? While, those days are long behind the Waterloo, Ontario-based company, CEO John Chen isn't giving up on BlackBerry.

"I am comfortable with where the company is today, how we managed our technology, our businesses, the margins, the distribution channel or the new products that's coming out," Chen said during an interview with Bloomberg TV. "Whether it's going to be good enough to be iconic again, OK, that's something I need to chew on. I don't know the answer to that question."

And to be fair to Chen, it is a tough one to answer. The company has had a rough go of it lately. Last year, a $4.7 billion deal to go private failed, former CEO Thorsten Heins stepped down from his post and the company reported a $4.4 billion loss for the quarter that ended in November, which was interim CEO Chen's first month on the job. Heading into 2014, BlackBerry stock dipped as low as $5.75 a share, down from its peak of $230.52 in 2007. In the spring, even President Obama was reported to be potentially leaving his BlackBerry behind for Samsung or LG. 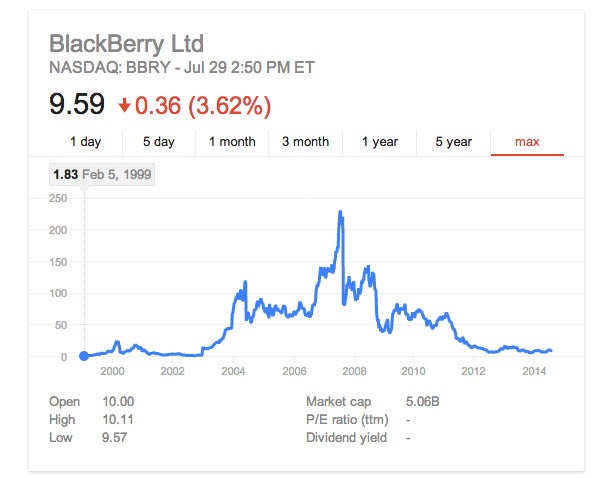 Still, Chen remains optimistic about the company's future stating its chances of success are "better than 80/20." And as of late, he has been making changes to try and ensure it comes out on top.

In February, BlackBerry rolled out their new Q20 smartphone with a "classic" QWERTY keyboard, and May saw the release of the BlackBerry Z3 Jakarta, the first product from their partnership with Asian electronics giant Foxconn. Today, the company announced it was acquiring Secusmart, a German mobile-security company known for its anti-eavesdropping software, in hopes of upping its security strategy. Whether these moves will translate to solvency remains to be seen.

Related: BlackBerry CEO: I Would Sell BBM for $19 Billion

Great Ads Are About Consumers, Not Technology