By Scott Shane September 23, 2014
Opinions expressed by Entrepreneur contributors are their own.

Policymakers often look to entrepreneurship as a way to boost the income of their residents, proposing policies designed to stimulate entrepreneurial activity. While different elected officials make subtly different arguments, at the most basic level, their common position is this: boosting the rate of business formation will cause the economy to grow and per capita income to rise.

The Gallup Organization shows the pattern clearly in a figure I have reproduced below. Analysts at the research organization compared per capita gross domestic product (GDP) with the fraction of the population that reported being self-employed in each of 135 countries. As Gallup's picture clearly shows, the fraction of the population that is self-employed has a negative linear relationship with the log of GDP per capita. That is, self-employment rates are lower in rich countries than in poor ones. 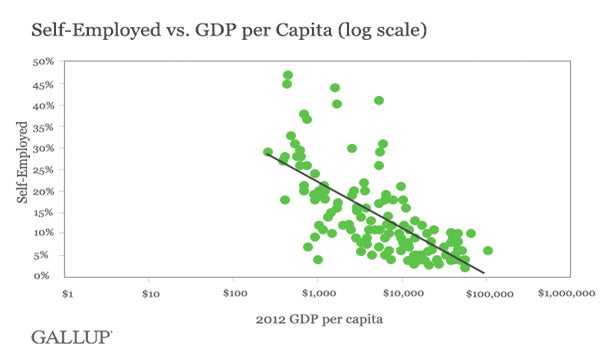 Gallup's study isn't the only one to indicate a negative relationship between rates of entrepreneurship and levels of per capita income. Data from the U.S. Census Bureau and Bureau of Economic Analysis show a similar pattern. Between 1977 and 2011, real per capita income increased 79 percent in the United States. Over the same period, the number of new employer businesses founded each year declined 49 percent. That is, as the United States has become wealthier, the rate at which people have started companies in this country has declined.

Several academic studies have documented the negative correlation over time between the growth of inflation-adjusted gross national product and self-employment in the Organization for Economic Cooperation and Development (OECD) countries. These studies show that as the nations have experienced economic growth, their rates of self-employment have declined.

Related: The Legacy of Communism Still Influences Beliefs About Entrepreneurship

Rates of entrepreneurship are negatively related to growth in societal wealth because rising incomes make possible more lucrative employment opportunities than running one's own business. In poorer places, where fewer high-paying jobs working for someone else exist, many people turn to entrepreneurship to earn a living. Statistically, this pattern means we see in a higher fraction of people working for themselves in poorer places.

Similarly, over time, places tend to get richer as they experience economic growth. Rising incomes lead high-paying jobs to emerge in many places. The development of more lucrative alternatives to running one's own business leads many people to transition from self-employment to wage employment, driving down the rate of entrepreneurship.

Gallup's recent analysis and the many studies that have preceded it present a cautionary tale for policymakers who want to believe that entrepreneurship is a silver bullet to raise incomes and transform economies. The data show that rates of entrepreneurship are negatively correlated with wealth because richer places offer people more attractive employment options than running their own businesses.