When you plan to add a minimum of five locations to your 10-unit restaurant chain in a single year, expanding out of the city you launched in for the first time ever, you have a lot to think about. Will your brand resonate in the new markets? Will your investors be pleased? Will the customers come?

For Adam Eskin, the question that trumps all of those is simply: Will we be able to retain that “startup” feel?

Dig Inn, the New York City-based farm-to-table eatery Eskin founded in 2011, is about to embark on a massive expansion plan, having just raised $15 million in Series C funding. The round was led by Wexford Capital and brings the chain’s total funding to $21.5 million.

Related: Too Fast, Too Careful: The Struggle to Find Your Growth Sweet Spot

Dig Inn has earned a cult-like following in New York, offering customers fresh, veggie-centric meals at about $7 to $10 a plate. This year, the company plans to grow from 10 locations to as many as 18.  All signs point to Boston as the first location outside of the Big Apple, though any major urban center on the East Coast is a possibility, Eskin says.

As the company expands and looks to hire about 100 more employees, Eskin’s greatest concern is making sure that his staff remains committed, passionate and invested in the concept. Currently, Dig Inn employs nearly 500 in-store staff and 20 in its New York corporate office. 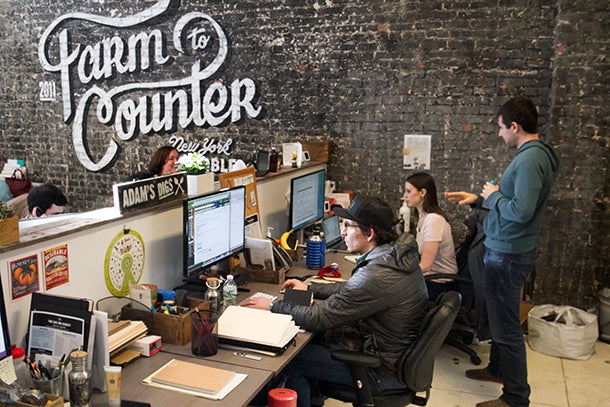 Dig Inn has, thus far, kept a pretty “startupy” feel in its corporate office, with “human time” lunches every day, where the company’s food is catered and employees are encouraged to leave their desk to eat with colleagues. Also, Eskin’s puppy, Max, serves as the company’s comptroller.

Most importantly, the Dig Inn team has thus far been making decisions as a close-knit group -- and as it grows, Eskin knows it’ll be harder to continue to do so. To foster collaboration, he has moved out of his private office and into the common, open space where the rest of his corporate staff works. What was his office will become a break room with a yoga matt, a pull-up bar and a door that closes in case an employee needs to make a personal call or needs space to think. “My desk is now wedged between five others,” he says.

Eskin’s other ideas for keeping the Dig Inn team unified include launching a company newsletter and hosting sports team meetings, get togethers and social hours for his young and growing company.

Eskin is still figuring out how to preserve culture as his brand grows. He’s committed to the cause, believing culture is key to the company’s continued growth. “We are consciously taking steps to preserve what we have.