By Jason Daley March 29, 2015
This story appears in the April 2015 issue of Entrepreneur. Subscribe »

Franchising has seen significant advancements in the past decade, from the emergence of fast-casual dining to the development of apps and cloud services to help run operations. But one of the biggest changes came on four wheels—the rise of mobile franchising.

Mobile-based businesses were once the realm of plumbers, handymen and other service technicians who would roll up to clients’ homes in vans. But today it’s much more, with franchises putting entire coffee shops on bikes, building restaurants and bakeries into the backs of trucks and jamming anything they can think of into RVs. And customers love it.

During the Great Recession, as financing dried up, the franchise community began thinking about ways to make offerings more affordable. The solution, in many cases, was to put the concepts on wheels. Mobile businesses tend to have lower startup costs than brick-and-mortar operations. They also have a shorter ramp-up, so franchisees can start bringing in revenue almost immediately, rather than negotiating a lease and waiting for a build-out.

As mobile businesses became more common, franchisors realized that the strategy wasn’t just a stopgap or add-on service; mobile could be at the core of a concept. They found that time-strapped and overworked consumers wanted services brought directly to their homes or businesses.

One of the most impressive mobile franchises is Velofix, a Vancouver-based bike-repair shop. The concept came about from the founders’ frustration with storefront alternatives.

“Most independent shops don’t have a preset system for booking bikes for service,” explains Chris Guillemet, who founded the company with Davide Xausa and Boris Martin in 2012. “In good weather, people will bring their bikes into shops in waves and create a backlog. People sometimes have to wait one or two weeks for their bikes to get serviced.”

That can be a long time to wait, especially for those who depend on their bikes to get to work. So the Velofix team developed a mobile shop that allows its techs to go directly to a customer’s house or office and work on the bike from the company van.

The setup is sophisticated: a 24-foot Mercedes Sprinter van loaded with everything a full-service bike shop would need. All equipment runs on rechargeable marine batteries, meaning there are no noisy diesel generators. Skylights minimize the need for electric lighting. Tools are secured by hooks and magnetic strips and can be moved around to fit the ergonomic needs of the individual mechanics. Each shop-on-wheels even has a small lounge where customers can sit and have a drink while talking to the mechanic as their bikes are serviced.

“I’d say 70 to 80 percent of our clients stay with us during the service,” Martin says. “We have Wi-Fi, and we live-stream cycling events. They can have a coffee and chat about bikes and learn a lot about bike care and maintenance.”

Customers can buy things, too—Velofix vans carry a wide range of accessories, from lights and GPS units to wheel sets (although they don’t stock larger items like helmets and shoes).

Velofix has five active units in Toronto, Calgary, Ottawa and the Vancouver area and is getting ready to roll out 20 vans in the U.S. by the end of the year. 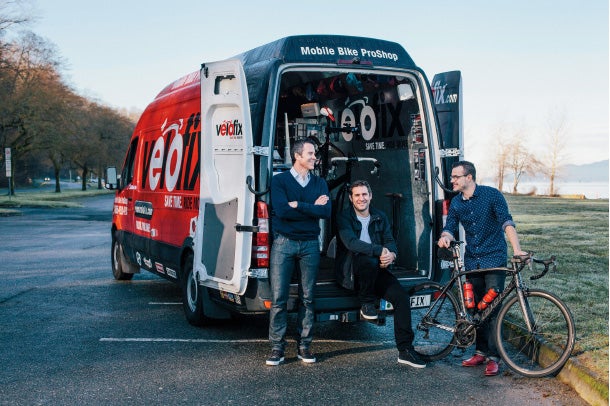 Donna Sheehey, based near Boston, was similarly motivated by frustration when she launched her mobile dog-grooming franchise, Zoomin Groomin, in 2004. She eventually outfitted a van with a self-contained grooming system.

Zoomin Groomin now has 11 units on the road. Though the company temporarily suspended franchising, it is relaunching the program this spring and aiming for aggressive growth. New franchisees will operate out of Ford Transit Connects.

“Through trial and error, we figured out our layout,” Sheehey explains. “We don’t need a separate cab, so it’s all one interior. We have a rear temperature control and comfortable flooring with lots of cabinet space. There’s enough room for two people to work, though we typically have one groomer.”

What makes Zoomin Groomin viable is the grooming equipment, which fits easily into the vans. The 13-gallon Eco-Wash unit uses 90 percent less water than other systems, and the hand-held wand gently sucks dirt and debris from the dog’s skin in a massaging motion. The company uses Pure Oxygen Ultra Shampoo, a nontoxic product that leaves no residue. By the end of the wash and cut, dogs are about 70 percent dry.

While Zoomin Groomin is built on the idea of convenience, Sheehey admits that it’s a luxury product. “We operate in more affluent areas right now,” she says. “We’re more of a premium type of service for people interested in organic solutions for their pets.”

As many young professionals put off having children, much of their disposable income and attention is spent on pets, she explains. “They are one of our larger demographics. No expense is spared. The pets are in their beds, in their cars, and they want them cleaned organically. But they are too busy to take them to the groomer. That’s where we fit in.”

One day when Josh York was working as a personal trainer, a customer apologized for being late because she had to drop her children off at school. “She said, ‘I wish you could come to my house!’” York recalls. “I was up until 2 in the morning thinking about that. I thought that if I could professionalize that concept, how cool would it be?”

That’s how his mobile fitness franchise, GymGuyz, was born. The Plainview, N.Y.-based company has 21 units and plans to open another 25 to 35 this year. It’s a win-win situation: Customers get to work out at home, and trainers don’t have to sit at a gym all day waiting around for clients or working the front desk.

But the heart of GymGuyz is its customized vans, which carry 365 pieces of exercise equipment, from a weight bench to medicine balls to parachutes. York, a self-described neat freak, spent a long time figuring out a way to organize all the equipment within a vehicle.

“I could put you through a comedy hour telling you all the things I tried,” he says. Eventually he found the right formula: a system of shelves, hooks and reinforced plywood cabinets. When franchisees switch to new vans, which they do every five years or so, they’re able to reuse the infrastructure.

“It took a while to figure out, but good things take time to create,” York says. “This stuff is very, very strong. You can’t even break it with a sledgehammer, and it always looks clean.”

The variety of equipment is necessary since GymGuyz workouts are customized for each client. Trainers pull out what they need from the van based on a client’s fitness level and keep track of progress on proprietary software. One trainer even went out to meet a client who was stuck in traffic, and the two headed nearby for a quick workout. 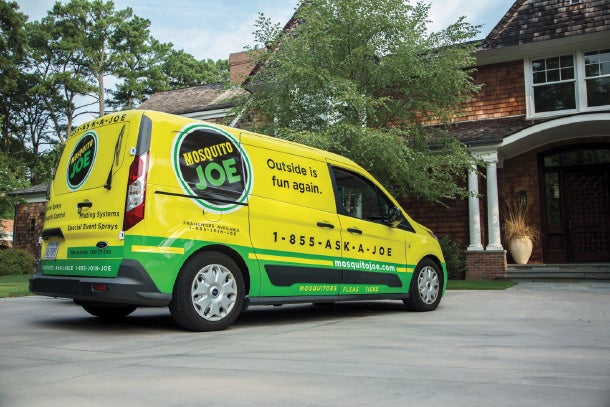 While mobile franchising is becoming more popular, it’s not for everyone. Employees spend their days working out of a van, often without the structure or companionship of other workers. Brad Simon—who operates four Mosquito Joe pest-control trucks in two territories in northern Arkansas—says it takes a unique personality to work in a mobile unit.

“It needs to be someone who works well independently and someone who takes pride in their work,” explains Simon, who plans to add three more territories this year. “Most of those types of people tend to be introverts, but for our business, customer interaction is critical. We need someone extroverted enough to make customers feel comfortable and who can explain our concept to interested neighbors. The task is to find someone with that fine balance.”

Franchisors also need to find responsible workers who will represent the brand in a positive way as they move around town. “Our vans are a rolling office,” Simon points out. “The image of our company is what people see in those vans. They’re a bright yellow, rolling billboard. When I’m driving one, I’m constantly aware—to the point of paranoia—that I’m going to do something wrong or cut someone off!”

Like many other mobile franchises, Mosquito Joe uses customized Ford Transits. Each carries a 100-gallon tank of water, plus a custom rack to hold the sprayers that are used to rid clients’ yards of mosquitoes.

But the key to the system is its technology package, says Kevin Wilson, CEO of the Virginia Beach, Va.-based company. Each van is outfitted with a tablet that syncs with the company’s CRM system to optimize routes and update appointments on the road.

“It’s really pretty slick,” Wilson says. “Those apps cut down on the wear and tear on our trucks and save us gas. And it really makes our techs more productive.”

Not all mobile franchises fit into a standard van. Tempe, Ariz.-based GameTruck uses customized RVs to bring mobile arcades to birthday parties and other events.

“Our rigs are built in Indiana, the holy land of RVs,” says founder Scott Novis. “They have an incredible infrastructure down there. Our rigs are made of aluminum, so they are lightweight, don’t rust and save on fuel costs. We have a really advanced heat pump, which saves on wear and tear of the power plant.”

The sides of most RVs open up, allowing for indoor and outdoor screens, a dance floor and enough seating and consoles for 16 to 20 kids. An advanced cable-management system minimizes tangles, and the interiors are handcrafted with a heavy emphasis on quality and durability.

“The worst thing that can happen is disappointing a kid,” Novis says. “That’s why our trucks are tough and easily serviceable. If a plumber’s van breaks down and he has to cancel, he disappoints one family. If we have to cancel, we disappoint 20 families.”

Novis argues that with the demise of arcades and the advent of social media, kids are losing the magic that comes from social interaction—even if it’s while playing video games. That, he says, is what his mobile operation brings to the picture. “The core of our business is making new connections and interacting with people. People get really happy when we show up. They feel an energy that is uncommon in their lives.”