Will AI Really Be the End of Us? 'Ex Machina' Will Leave You More Contemplative Than Ever.

By Carly Okyle March 23, 2015
Opinions expressed by Entrepreneur contributors are their own.

Art -- be it movies, music, paintings, or any other medium -- is often intended to express a point of view and to provoke a response. Alex Garland’s new film, Ex Machina, does both. The movie is entertaining and engrossing, but also thought-provoking, leaving the viewer to contemplate big questions: What does it mean to be human? If artificial intelligence becomes lifelike, will it be our undoing? Is the creation of artificial intelligence a natural, evolutionary step (as when humans evolved from neanderthals) or is it an act of humans playing God? 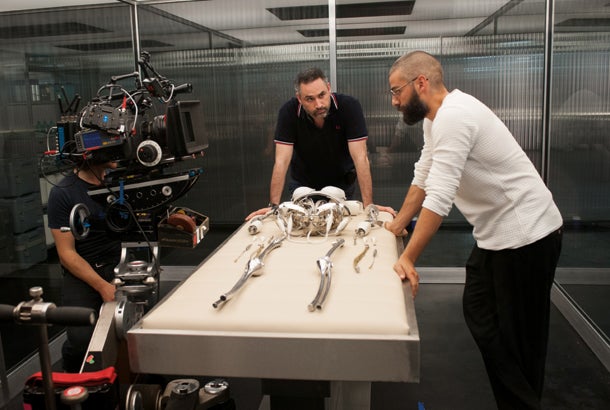 While Garland maintains that his personal point of view is presented in the film -- you’ll need to look for the moments that subtly demonstrate it -- he won’t tell you his thoughts to these questions directly. “In a way, I don’t want to spell it out too much because it’s not supposed to be a lecture, it’s a story,” he told Entrepreneur last week.

Garland learned from writing the novel The Beach, and the corresponding screenplay for the film that starred Leonardo DiCaprio, that the makers of art have no control over how it’s interpreted. “You just give it over and you present it in a way you want to present it and then 50 percent of the thing is decided by the recipient,” he said. “It’s up to them.”

Given the dynamics between the female robots (Ava is just one) and the two human men in the story -- the cast is small, and incredibly talented -- much can be said about the portrayal of gender politics and relationships, romantic or otherwise. Again, there are questions. Is anyone really honest or are they always “on,” presenting a tailored version of themselves? Can machines have feelings? How well do we know the people we interact with daily? Again, these inquiries are up to interpretation.

At Austin’s SXSW, where the film premiered on March 14, some of these issues were demonstrated off-screen. As a marketing tactic, Tinder users in the area were ‘catfished’ by Ava’s profile. The campaign got attention, which this movie deserves. 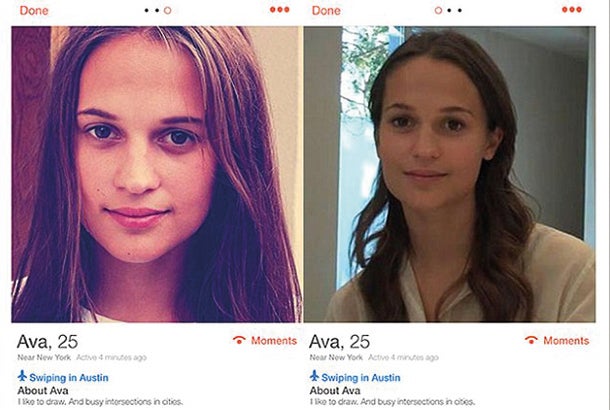 Garland presents different sides of these issues while crafting a compelling story. The idea came to him from a book he was reading as he worked on another movie. “I had a kind of moment of thinking ‘hang on, there’s actually kind of a story here. you can dramatize some of these strange arguments and issues around this in this very kind of focused way,’ he said.

The audience has no choice but to pay attention as they navigate a labyrinth of deceit. Where the truth lies ultimately depends on where the viewer places allegiance -- with Ava (the machine) or her creator. On this point, he is clear: Garland says he’s partial to Ava’s side of the story, admitting that the two male characters annoy him.

There were also other questions in the interview that Garland is willing to state his opinion on. Of course, that opinion was not a definitive one. Could strong AI like Ava be coming soon? Maybe, maybe not. In a way, he thinks the idea is similar to a cure for cancer. He explained the problem each idea faces: “You can make advances and progress but then the problem retreats,” he said. “As you get to it, it also pulls away because another problem presents itself.”

Well, assuming we do create a strong AI like Ava, should we be scared? That depends. The dangers of artificial intelligence, he says, stem from how people choose to use it. Drawing a parallel with nuclear power, which the film also does, he says, “if you use them carefully and responsibly, then they’d be benign. It’s not the AI that scares me, it’s how it’s employed or how it employs itself.”

Whether you see it for the fantastic visual effects and stunning scenic shots (all on an independent-arts-movie budget!) or for its brilliant acting or its storyline or for the issues it raises doesn’t matter. What matters is that you see it. It is worth watching, without question.

Start with watching the trailer below.

Related: 4 Movies Every Entrepreneur Should Watch

Correction: An earlier version of this article misstated the social network that was used to 'catfish' users. That network is Tinder.

3 Entrepreneurial Uses of Artificial Intelligence That Will Change Your Business

This Is How AI Content Marketing Will Shake Up 2022