This New Startup Wants to Be Your WhatsApp for Professional Networking

When you’re moving a million miles an hour, writing an email and waiting for a response can feel like a generation.

That’s why there are so many ways for you to send messages in real-time today: Google Chat, Facebook Messenger, WhatsApp and the list goes on from there. It’s also why the company behind Slack, the intra-team collaboration tool, has doubled in value to $2 billion in the last six months under the battle cry of killing email.

That’s the backdrop against which Caliber is launching today. Describing itself as “WhatsApp meets LinkedIn,” the app enables users to instantly chat with their business contacts instead of communicating via email.

Related: Slack, the Startup Looking to Kill Email, Is Now Reportedly Worth $2 Billion

“We see a huge opportunity in making it much faster for people to interact with their business contacts. By making this process faster, you're able to reach out to more people and in turn you increase your chances of being more productive and successful in your career,” he says. “This shift from email to messaging is happening not only with your friends.” 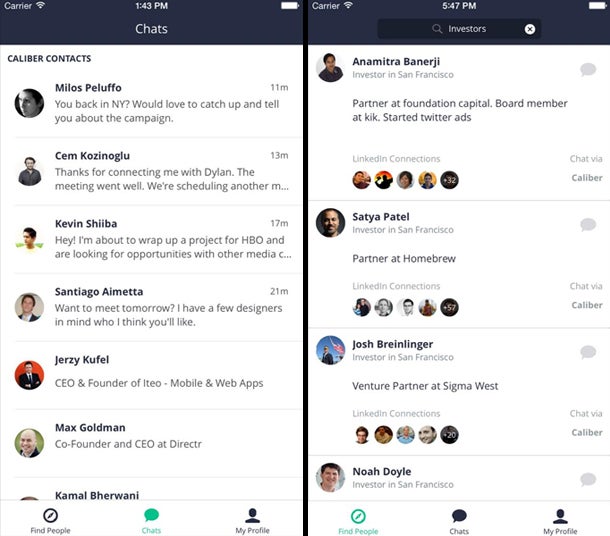 Now, we know what you’re thinking: What’s so hard about sending an email? Would I really feel comfortable starting casual real-time convo with a person I only met once at a networking event? Caliber CEO Andres Blank is betting on it, citing Slack as an example.

“Before Slack, people were happy sending emails to their colleagues. But once they started using Slack and sending shorter and more informal messages, they became more productive as a team and moved away from email for internal communications,” he says.

Caliber lets users search their business contacts by skills, companies they've worked in and location. Right now, it syncs only with your LinkedIn account, but intends to integrate with your Twitter, Dribbble and Angel List address books in the future.

Prior to launching Caliber, Blank launched and sold the social photo aggregator Pixable for $26.5 million to the Singaporean telecommunications giant SingTel.

Skip the Emojis: Your Small Business' Text-Messaging Campaign Should Be All About the Deals