By Nicole Lee November 17, 2015
This story originally appeared on Engadget

Google's low-end Cardboard headset is by far the cheapest and easiest way to get started with virtual reality. Unfortunately, it isn't exactly super portable and it's not very durable either -- it's just cardboard, after all. Of course, there are plenty of other phone-compatible VR headsets out there, but most of them are still pretty clunky.

The Figment, on the other hand, is a different take on VR (and AR) altogether. Debuting on Kickstarter today, it's an iPhone case that can be transformed into a VR viewer with just a flick of a button, making it the only VR headset we know of that can fit in the back of your pocket.

In a way, we're surprised this hasn't been done before. On the front, the Figment looks like an ordinary iPhone case. On the rear, however, are a pair of lenses that look just like the ones on Google's Cardboard. Slide a couple of toggles, and the lenses will flip over, instantly positioning themselves in between you and the screen. To put it back, simply flip them over again and snap the lenses into place. It really is that simple. In a brief demonstration with a Figment prototype, I found the flipping action tremendously fun and addictive, giving me the same satisfactory sensation that I felt when playing around with T-Mobile's Sidekicks of yore.

And lest you think the Figment is just some random iPhone accessory, Zi Wang -- Figment's creator -- would have you think otherwise. Wang is also the founder of Quantum Bakery and is the brains behind Glow, a pair of earbuds with laser light cords that had a successful Kickstarter campaign earlier this year. Wang, a former Googler, has been in talks with both Google and Apple for much of the year to make sure the Figment fits within Apple's stringest aesthetic requirements while also being fully compatible with Cardboard apps and software. "When we're designing a phone case, it has to be pocketable," he says. "It has to offer minimal protection and can't destroy the overall aesthetic of the phone."

During our interview, he delved deep into nerd territory by informing me that the bevel and chamfered edges around the case's aluminum piece are all referencing the Apple "look and feel." The final Figment hardware will be made from polycarbonate with a hint of silicone to keep it malleable. It'll consist of about 40 parts total all ultrasonically welded together. The hinges will also incorporate about eight different O rings plus some dampening gel so that when the lenses flip around, it won't bounce when it lands. Needless to say, Wang's attention to detail to something as simple as a phone case is impressive. 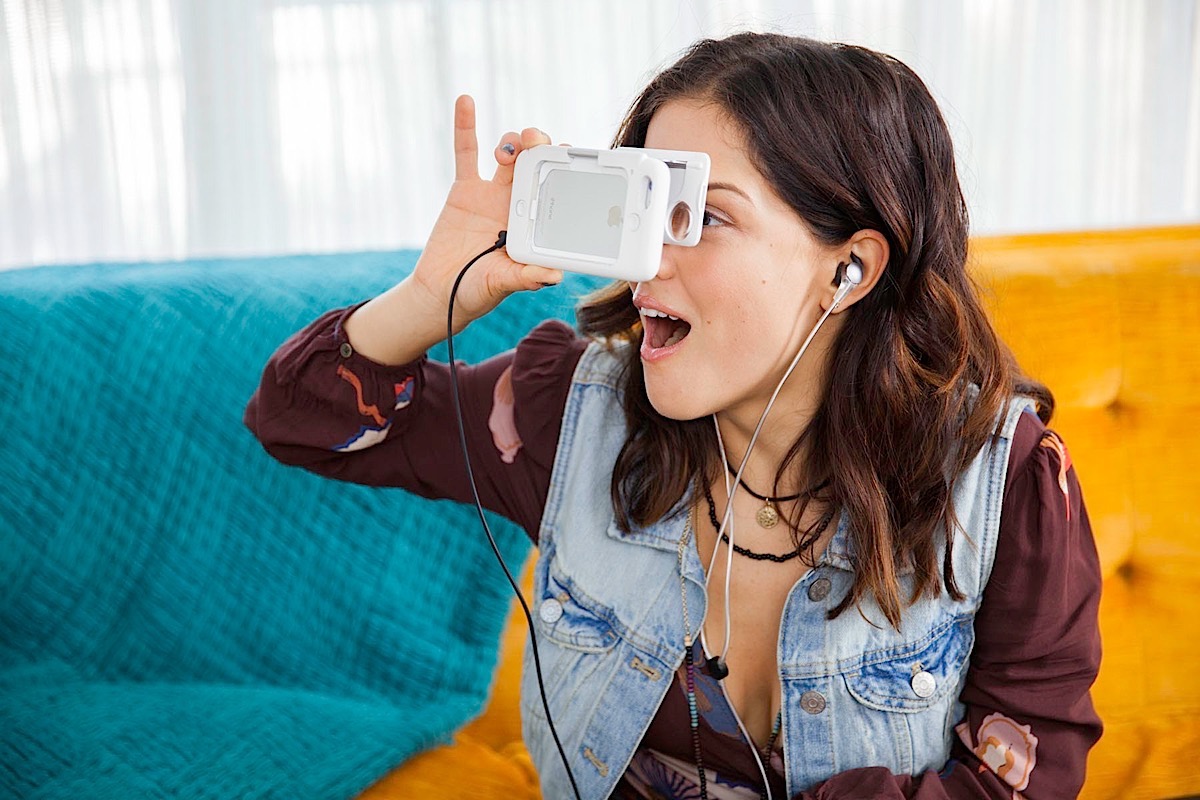 "I don't want to design something that people will feel embarrassed by," he says. "It should get out of your way. When it's not in use, it's invisible."

You might be thinking now that the Figment's open design is a problem -- after all, most VR headsets are enclosed to ensure maximum immersion and to avoid light bleeding through. But Wang tells me that the Figment's open design offers a few advantages. For one thing, since you're not completely disconnected from reality and have that tiny bit of peripheral vision, you'll get less motion sickness. Additionally, with an open concept, you'll get direct access to the screen. "I think the best input device today is still the touch screen," he says. "You'll have a more reasonable mobile gaming experience, with far less latency." This, he says, is far easier and faster than using Cardboard's current nubby button. Last but not least, the open design gives the Figment a couple degrees of play, so that the nose bridge can easily fit different faces.

But what's perhaps more interesting is that aside from the glasses, Wang is also working on an app that's integrated with augmented reality software. He showed me a brief demonstration where he was able to use the phone's camera along with some computer vision tricks to alter a Starbucks cup into a basketball hoop, and a bottle of Coke into a rocket. "It's a new form of hyperlinking," he says. "But instead of linking one digital piece of content to another, you're linking digital content to a physical thing." 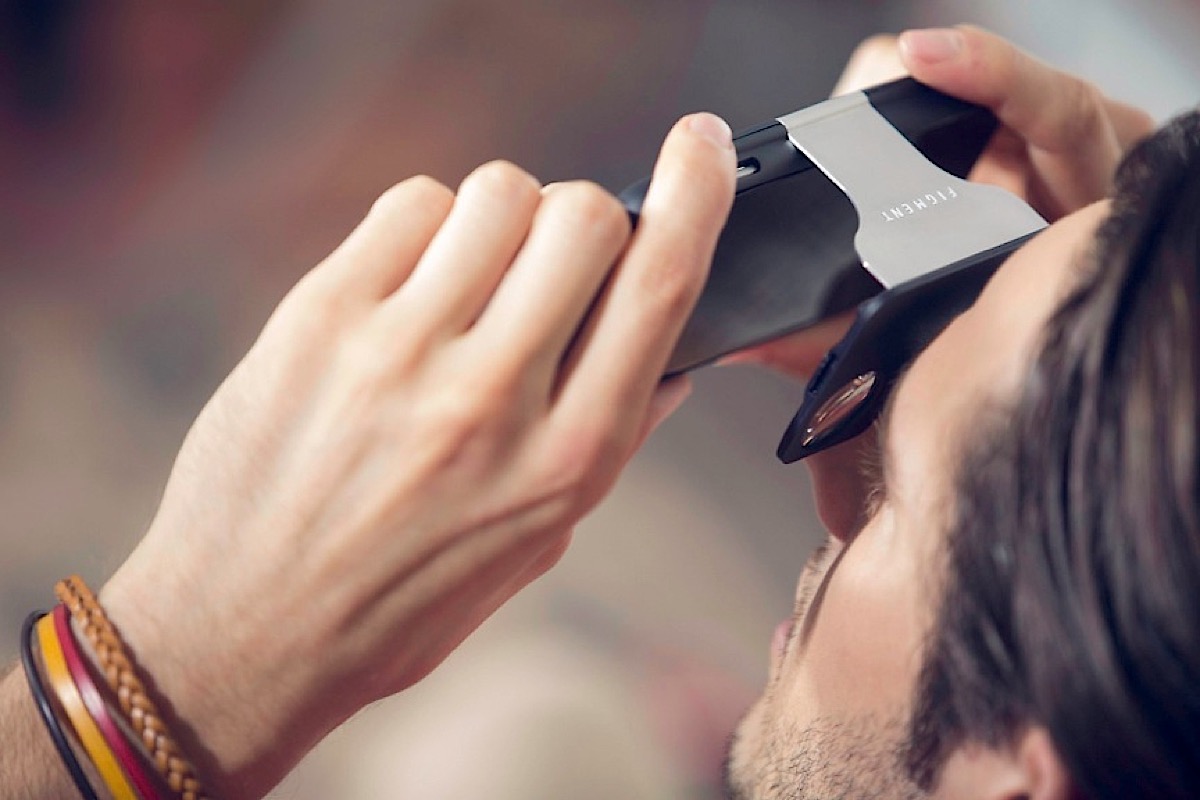 What I found particularly exciting was when he focused the phone's camera on a lamp with a Philips Hue bulb, and the software instantly knew what it was due to the pattern on the lamp shade (he had already pre-programmed the pattern to the app). He could then change the color just by tapping on a color palette. Then while the software was still open, he pointed the camera at another lamp shade with a Belkin WeMo lamp, and it too was recognized instantly and he was able to turn the lamp on and off from the app. Augmented reality, he says, can potentially make the Internet of Things less fragmented, by unifying their interface in a single app.

Even so, VR is the focus of the hardware here. "I'm betting on VR," says Wang, adding that with all of the new software like the New York Times app and both Facebook and YouTube investing heavily in 360 video, VR is hotter than ever. And with something like Figment, you'll finally be able to take it everywhere with you. "This lets you experience VR in a much more casual way," he says. "It doesn't have to be a big clunky headset." There's no setup; you can just fire it up and say to your friend 'Hey, check this out.'"

Still the Figment is not really cheap. It'll retail for $79, though you can get it an an early bird $49 price if you jump on Kickstarter as soon as possible. It comes in white and black plus a couple of different sizes so that it can accommodate the iPhone 6 and up. Wang isn't ruling out a case for an Android phone just yet, but decided to go for the iPhone for now. As for when you can expect it if you chip in for a case, Wang says they should start shipping in early Spring 2016.