If you see pictures of Bader Al-Darwish, you might get the impression that this Qatari leader of enterprise is a jovial fellow. You might also assume that he’s laidback, and young at heart. He is, in fact, all of those things. The many images of Al-Darwish do capture those aspects of his personality well, but what they don’t tell you is that he’s got an eagle-eye on his many businesses (“Every morning at 7:30 a.m. I examine my updated figures,” a tally of the sales of the many-tiered conglomerate), he’s hyperactive in his maintenance of strong corporate relationships (“They are the most important thing in doing business!”), and that he’s got a frighteningly sharp memory (off the top of his head, he can tell you what milestones the company reached and when- in minute detail). There’s another thing that Al-Darwish’s pictures don’t tell you- he is fiercely for the free market, welcoming competition with relish. After all, Darwish Holding was there first, and, as he rightfully points out, it isn’t just a one-sided operation.

“For my business trading is not a major share, but it’s the part that I enjoy the most. Most of my business is real estate and the stock market. We’re not only in retail, we’re also in wholesale. We have the biggest market share for Rolex brand in the Middle East. The same applies to most of the luxury brands we represent. We’ve got Bosch, Bang & Olufsen… Even if any large scale retailers open, we have the product lines to supply every type of business.” And they do. The list is long and varied, and while the silos of the Holding work synergistically in ways, the revenue streams are very different and demonstrate sustained increases. “From 2003 to 2008, we made 40% annual growth. In 2008, when the market dropped, we did 20% growth. Now on average, we’re making 25% annual growth.” Some of these relationships are more than a half-century old, meaning they outdate Bader Al-Darwish himself. Darwish Holding signed with cosmetics and beauty staple L’Oréal in 1956, and with technology giant Sony a few years later in 1964 (Bader Al-Darwish was only five years old at the time)- it now holds the biggest market share for the household name. In his expansive office, you can time travel back to the founding of what is now one of the GCC’s most diversified portfolios, a who’s who list of some of the world’s best recognized brands and most prestigious fashion Houses. “We are the second oldest agent of CHANEL in the world whom we signed with in 1954, and the oldest agent of Rolex in the Middle East- we signed with them in 1951.” A current example of company influence and strength? Despite the country’s small population, Darwish Holding’s relationship with fashion designer Carolina Herrera is relevant enough to warrant personal visits by the elegant designer (together with her daughter), and just one month ago, the Herrera House’s CEO, François Kress, was welcomed by Al-Darwish in Doha as well. Another show of relationship strength? CHANEL’s co-owner, Gerard Wertheimer and Rolex’s CEO, Jean-Frederic Dufour, were hosted by Al-Darwish recently in his residence in Doha. 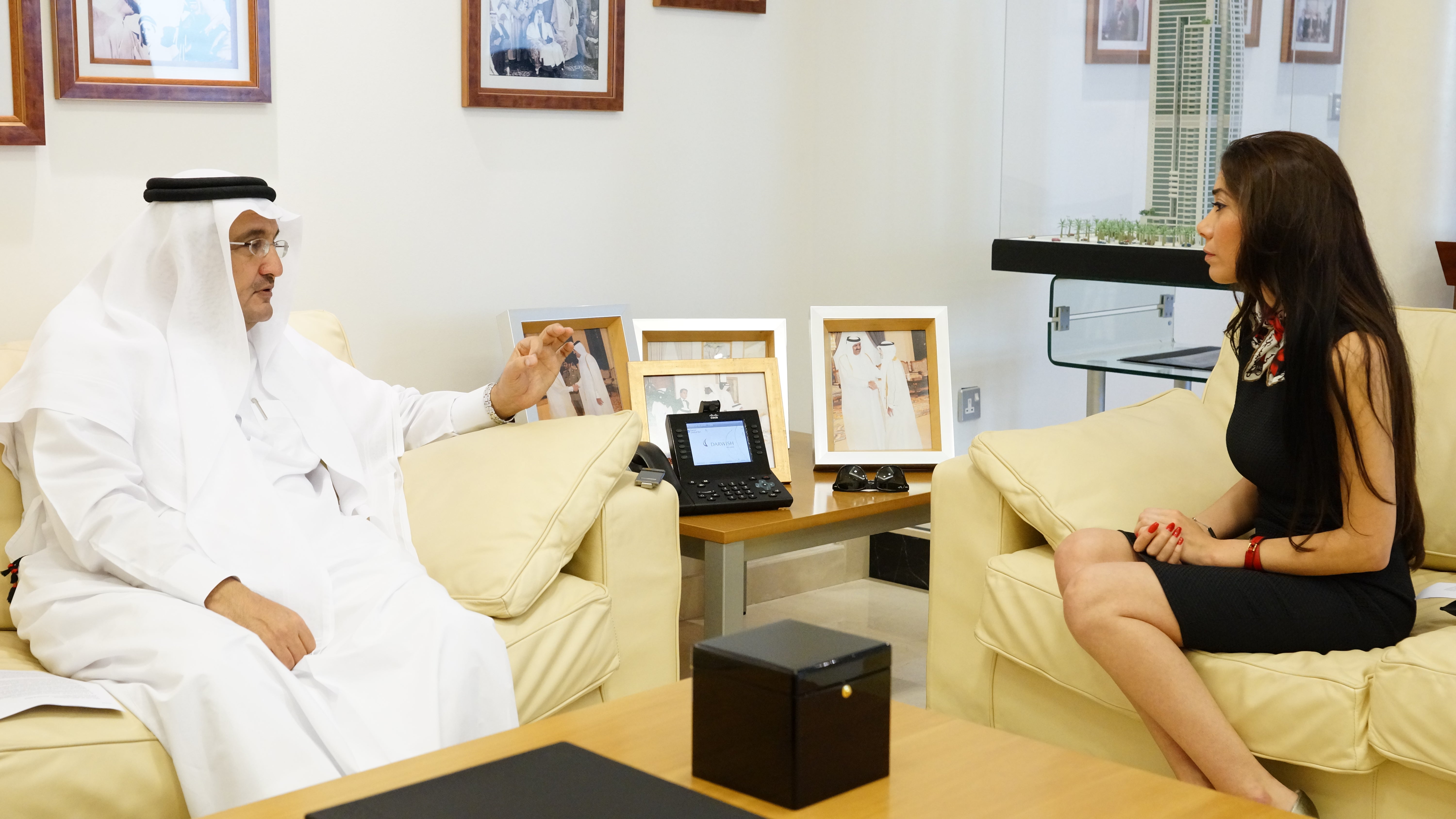 To really understand how deep Al-Darwish’s enterprise roots go, you’ll need to know how it all started. Think about Qatar back in the 20s –I admired the family’s present-day achievements even more after seeing historic images from that period in the Al-Darwish private archive- and then think what it was like launching a business for Abdullah Al-Darwish Fakhroo, Bader Al-Darwish’s late father. As a young man, Al- Darwish senior, together with his brothers Jassim and Abdulrahman, set out across what is currently known as the GCC to trade and stake their claims. These forays into present-day Saudi Arabia, Bahrain, UAE, and other nations (first with wares like pearls) eventually led to expanding into contracting, automobiles, airlines, real estate, financial trading, and oil and gas… and along the way nurturing rich relationships that the junior Al-Darwish brothers cultivated into the next generation, and he assures me that their children after them will be following suit. “We’re more than 100 years old,” explains Al-Darwish with a measure of familiar pride tinged with sadness, gesturing to carefully preserved images. “Here is my father, God rest his soul, with Sheikh Abdullah bin Jassim [bin Mohammad Al-Thani], and President Anwar Sadat [of Egypt]. That’s my father here with King Fahd bin Abdulaziz Al Saud and Sheikh Khalifa bin Hamad Al-Thani in Qatar.” These are just a few examples of the Al-Darwish legacy that built the foundations of the business that today includes MENA, European and North American real estate, stocks and investments, and a consumer facing side of retail, in addition to interests in banking and finance.

Some of these long-term, close relationships extend into Europe and Asia, and Al-Darwish’s memories cross decades of visits to Japan. These images also reflect the degree of importance and the personal attention that these global conglomerates shower on Darwish Holding; in all of the pictures, it’s always the brand founders or group CEOs next to the perpetually pleasant Al-Darwish. To put this into perspective for you, it’s not often that the founder of a company like Sony sets aside time to entertain a guest, and back in the 60s and 70s they almost never made journeys to places as far-flung as Qatar. “Here in this picture, it’s worth mentioning that we signed the biggest broadcast deal in the history of Sony with the global multimedia conglomerate, Al Jazeera Media Network,” he says, pointing at a fairly recent image. Nowadays, it’s a simple thing to get in and out of Qatar in the span of 24 hours from pretty much anywhere, but back when a young Al-Darwish was welcoming these leaders of industry, it was a rare and difficult thing to journey to the middle of the desert to a country that the global community really didn’t know of. He’s also hobnobbed with heads of state across too many countries to list here, and his de facto ambassadorial role is perhaps one reason that Al-Darwish was honored by the likes of Qatar’s H.H. Sheikh Hamad Bin Khalifa Al Thani “the Father Emir”, UAE’s H.H. Sheikh Mohammed bin Rashid Al Maktoum, and even by former Lebanese President Emile Lahoud. In a professional capacity, Al-Darwish is officially the Chairman and Managing Director of Darwish Holding, but he also sits on the board of Qatar National Bank, and he acts as an official Member of the Executive Committee.

In addition to serving in the aforementioned official roles, Al-Darwish has given of his time for national and regional interests. In some of his most notable roles, he acted as the Chairman of the Committee of the International Fund for Higher Education in Iraq, formed by H.H. Sheikha Mozah bint Nasser Al Misnad and a Board Member of the Supreme Education Council. But all of these achievements -businesswise, in the spirit of patriotism, and his devotion to philanthropic interests- haven’t sent Al- Darwish into complacency. In fact, it’s just the opposite, and spending two hours with him is more than enough to convince you. “My challenge is to always maintain this double digit growth now, and in the future. The drop in price of oil will not affect negatively because of the surplus that governments of the GCC took into consideration. It will not stop projects but it may cause some delay and enforce wiser spending. This phase might shake some traders whom I unfortunately refer to as cowboys who took advantage and wanted to grow for the sake of growing. Expanding for the sake of expanding doesn’t appeal to us- before we take on a new brand, we execute due diligence.” He says that this filtering process acted as the great equalizer; in Al-Darwish’s opinion, it restored the natural order of things- and the result was that serious and dedicated businesses stayed the course, while fly by night endeavors in Qatar went out the window. And regarding the current GCC conversation of a luxury oversupply, Al-Darwish says that like anything, measured growth, due diligence, and a realistic evaluation of the respective market potentials. “The sky is the limit, and the opportunity is there- but for those that have creativity. Do execute feasibility studies- is there room in the market for your business?” There is, he says- and his consistent upward growth is proof positive for those that need to see it.