While many East Coaster recoiled in the face of Winter Storm Jonas, the third worst blizzard to ever clobber New York City, others saw a quirky business opportunity.

Case in point: Twenty-eight-year old Brooklyn, N.Y., resident Patrick Horton constructed an igloo out of the hordes of snow (more than 2 feet) that amassed in his Greenpoint backyard. Ever the entrepreneur, Horton then listed the igloo on Airbnb for a cool $200 per night.

"Dripping with ingenuity and alt-lifestyle aura lays this snowpocalypse's most desirable getaway," the post read, per DNAinfo. "Built completely by hand all natural. Come experience this chic dome-style bungalow with Bae."

Horton told Entrepreneur that the listing was only half-serious. “We tried to be satirical with our posting and the idea in general and play up to a lot of the stereotypes that surround people in Brooklyn,” he wrote in an email. “If someone really was willing to pay $200 per night to stay in there then we would have definitely let them do it.” 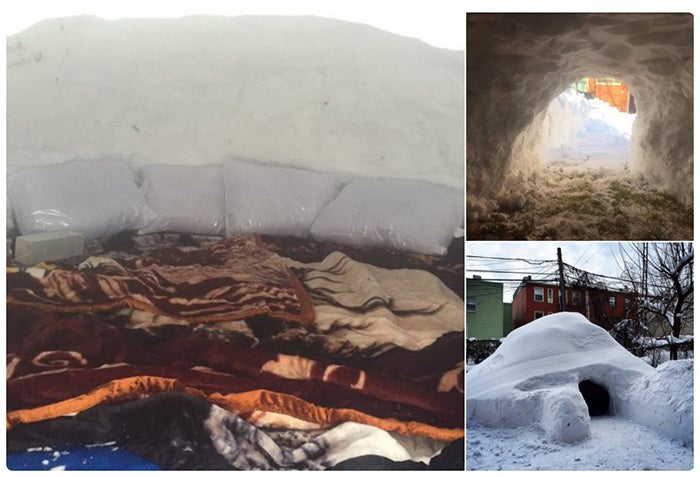 Related: Airbnb Is Now the Third-Highest Valued Startup After Massive $1.5 Billion Funding Round

After reports of the structure went viral on social media and Reddit, however, Airbnb was not exactly amused, and promptly removed the listing last Sunday evening. "Unfortunately, your igloo, while very well constructed, has failed to meet our occupancy standards and has been removed from search results," an Airbnb rep reportedly wrote to Horton, explaining that listings must have running water, electricity and a roof that doesn't melt.

To be fair, other igloos are available for rent on Airbnb, including this four-person structure in Austria, which reportedly allows pets, smoking and somewhat perplexingly also features an indoor fireplace. “I’m not sure specifically why they turned us down when they rent out other igloos,” Horton said, adding that the Airbnb rep even gave him and his friends a discount to rent out other igloos on the site.

Airbnb did not immediately respond to request for comment.

For his part, Horton, who works as an advertising art director by day, has a few other ventures in the works, including rap music-inspired wrapping paper and neon lighting artwork. As for more snowbound ventures within the sharing economy? “Maybe we will try again next year with one that is more up to par with [Airbnb’s] expectations,” he said.

Is Recent IPO Vita Coco a Good Stock to Buy?

According to Wall Street: 2 Solar Stocks to Buy, 1 to Sell