How To Hire High-Performing Salespeople For Your Business

By Abdul-Rahman Elshafei April 24, 2016
Opinions expressed by Entrepreneur contributors are their own.
You're reading Entrepreneur Middle East, an international franchise of Entrepreneur Media.

Hiring the right sales team is critical to an organization’s success. One of the greatest challenges in sales management today is selecting candidates who are likely to turn out to be successful. Newly hired reps that eventually don’t perform well can be devastating to any company. Not only would they cost the company in terms of ad placements, interviewing, assessing, and training, but they could also result in opportunity costs in loss of sales. One should also take into account how wrong hires could damage a company’s reputation, as well as ruin established relationships with current customers.

Unfortunately, many managers today make hiring decisions based on old school practices, flawed conventional wisdom or just what “feels right,” rather than objectively proven criteria. The following are five factors that are critically important for hiring the best sales people based on recent and latest studies in management and psychology.

1. Introverts vs. extraverts, and the power of ambiverts

In 2013, Adam Grant, a Professor at the Wharton School of Business at the University of Pennsylvania, wanted to determine the relationship, if any, between personality traits and sales performance. He performed a study on 340 outbound-call center sales representatives, and tracked their sales revenue over the following three months. At the start of his study, he evaluated the character of each participant using the Big Five Personality Measure. He was particularly interested in measuring participants’ extraversion traits, in which each participant was scaled from 1 (strongly introverted) to 7 (strongly extraverted). Extraverts are characterized as sociable, assertive, lively and sensation seeking. Introverts, on the other hand, are more soft-spoken, reserved and less outspoken in groups.

After tracking the revenues of the sales representatives for three months, Grant discovered something surprising- the average revenues per hour earned by extraverted sales reps were almost exactly the same as earnings achieved by introverted sales reps. His findings questions the longstanding belief that most productive salespeople are extraverted. Still, Grant was not the first to learn that extraversion is not related to sales volume. Prior to his findings, there were 35 separate studies involving 3,806 salespeople concluding that the average correlation factor between extraversion and sales performance is a mere 0.07– which is essentially non-existent. Furthermore, a recent study published by the Harvard Business Review found that the most sociable salespeople are often the poorest performers of all. Despite these findings, many managers are still driven by the notion that extraverts make the finest salespeople, and they are more likely to be selected for sales positions by managers.

What’s new with Grant’s research, however, is that he found that the top selling salespeople belong to a third group, ambiverts: people who are neither overly extraverted nor overly introverted. Ambiverts earned on average 70% more revenues per hour compared to their counterparts; the introverted and extraverted sales reps. These salespeople had extraversion scores of 4.0 on a 1-to-7 introversion-extraversion scale. The reason ambiverts perform substantially far better than extraverts is that they know how to strike a balance between when to speak up and when to listen. In contrast, extraverts tend to talk too much and listen too little. They enthusiastically assert the value of their products and services, which leads to customers perceiving them as pushy and overly confident. Similarly, ambiverts also perform substantially better than introverts, since introverts can be too shy to initiate or too timid to close a sale.

Gallup, one of the largest performance-management consulting companies in the world, underwent a 20-year study made on how to turn prospects that never tried a product or service into advocates. Advocates are aggressively loyal customers who will actively sing you praises. They are your fuel for sustained growth, more valuable than factors like marketing, promotions and price. After interviewing more than a billion customers, they discovered four customer expectations remain remarkably consistent across various types of businesses and types of people. These four customer expectations should be addressed in the following order convert customers to advocates:

Levels 3 and 4 are based on talents. It is very hard to teach someone to be empathetic and to enjoy educating others. These are skills that are hard to acquire and cannot be taught. For these reasons, Marcus Buckingham, the author of the best-selling book First, Break All The Rules: What The World’s Greatest Managers Do Differently, said, “If your goal is to create advocates, you must select employees who have the talent to listen and to teach. Then have them focused towards simple outcomes like partnership and advice.”

In today’s world, hiring empathetic sales people who are talented in teaching is paramount to your business’s success. According to Brian Tracy’s book, Advanced Selling Strategies, a research was done to study common traits and behavior of the top salespeople in every business and industry. Among the findings of the study, they had discovered:

Related: The How-To: Going The Extra Mile For Sales 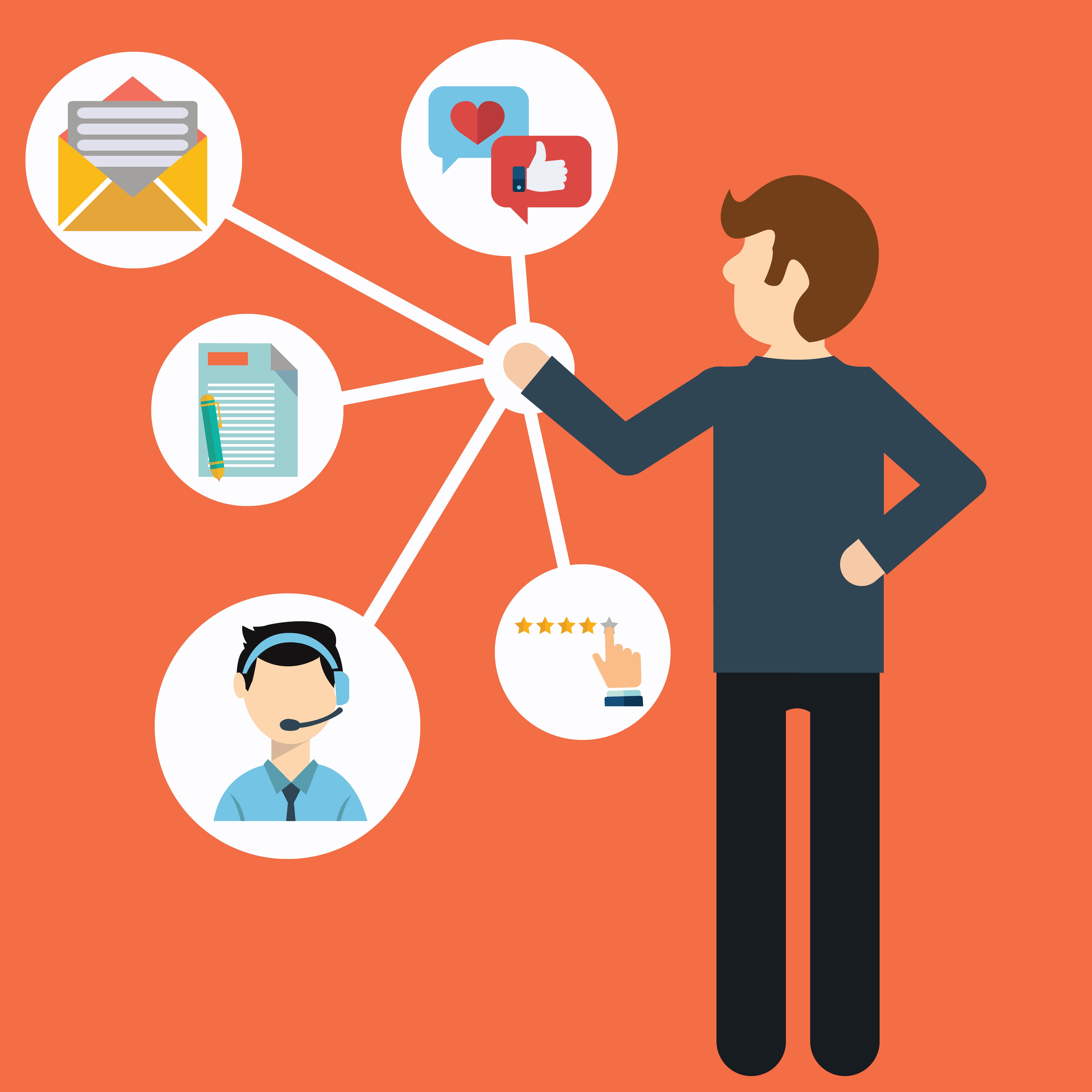 DARCARS is a small family-owned auto dealership that became one of the largest dealerships in the United States in a short period of time. When asked about the success of DARCARS and its sales reps, the Vice President of DARCARS, Tammy  Darvish, said in reference to her hiring process: “The ideal salespeople are those who ask themselves, 'What decision would I make if that were my own mom sitting there to get service or buy a car?'”. Top sales professionals care about helping their customers make good buying decisions. The more you care about your prospects, the more interested they become in doing business with you.

Furthermore, a sales professional with the innate ability to care is a quintessential factor for upserving customers. Upserving is defined as doing more for the other person than he expects or you had initially intended. In business terms, it is to take the extra steps that transform a mundane interaction into a memorable experience. Nordstrom is one example of a company that encourages its employees to upserve even at the expense of efficiency. Nordstrom is an upscale retail company that is ranked every year with the best customer service and has the highest sales per square foot performance in the retail industry. Nordstrom emphasized in its employee training manuals that exceeding customer expectations is one of its key techniques to sell more products. The company then inspires its sales reps by having them share stories of cases they had upserved their clients. Such real-life examples of such cases include the Nordie employee who ironed a new shirt for a customer who needed it for a meeting that afternoon, and the Nordie employee who warmed customers' cars in winter while they finished shopping.

4. Look out for chameleons and lyrebirds

In order to effectively persuade and move others, it is quintessential that sales professionals need to put themselves in their customer’s shoes. Sales reps need to be able to step outside their own experience and imagine the emotions, perceptions and motivation of others. Hence, hiring sales professionals with the ability to attune themselves to others is paramount.  Unfortunately, there is no direct and easy way to measure or find candidates who are better than others with such ability. One technique for measuring “perspective-taking” that social psychologists have been using since the mid-1980’s is called the E-Test. The E-test is simply asking a candidate to quickly draw a capital E on his/her forehead immediately after a short distraction. If the person drew the letter such that it looks inverted (?), then the candidate drew it so he could read it himself. If the letter was drawn in its correct orientation, then the candidate drew the E so you can read it, which proves his effectiveness in perspective-taking. Despite the simplicity of such a test, it could be however a bit silly to implement while interviewing and screening salespeople. Luckily, there are two alternative workarounds for finding candidates who are more effective in perspective-taking than others: chameleons and lyrebirds.

Chameleons are extraordinary reptiles that are capable of changing their skin coloration according to the physical environment surrounding them. Social psychologists often describe people who mirror and match the physical behavior of others during interactions as chameleons. Studies have shown that people who imitate the physical behavior of others are better in perspective-taking and moving others. Sales training programs today urge trainees to imitate the customer's body posture, hand movements, tone, and verbal style. A study published in 2008 titled Chameleons Bake Bigger Pies And Take Bigger Pieces: Strategic Behavioral Mimicry Facilitates Negotiation Outcomes reported that such mirroring has improved negotiation outcomes by four times.  For this reason, look out for candidates during interviews who naturally imitate the behavior of the interviewer, such as crossing the arms, leaning back and forward, or facial expressions.

Lyrebirds are a group of bird species that have a powerful vocal performance and are adept to produce a large range of sounds. With their skillful vocals, lyrebirds are capable of observing and mimicking the acoustics of other species and sounds from the environment. Similar to lyrebirds, a recent study has shown that articulate people are much better perspective-takers than others. A study published in Scientific American Mind found that sales people with strong verbal proficiency and communication skills are more likely to understand what the customer is thinking. Hence, when screening candidates, you can ask for or test the verbal scores of your candidates and select the most articulate person.

Traditionally, organizations look for candidates with the “right” educational background and work experience. The best companies add another quality: “Is the candidate infected with a love of your product or service?” This is because all the education and work experience in the world wouldn’t matter if the candidate doesn't “get it” and love what you do or stand for. Take for example Gillette, a company that produced stock returns more than seven times the market average for at least 15 years continuously (now acquired by Procter & Gamble).

According to The Wall Street Journal, Gillette explained its hiring process as simply as, “people who aren’t passionate about Gillette need not apply.” The Wall Street Journal reporter further described how a top business school graduate in the U.S. wasn’t hired because she did not show enough passion for Gillette’s deodorant line of products.

Related: Protecting Your MVP: Going To Great Lengths For Your Team Is In Your Best Interest

Abdul-Rahman Elshafei is a freelance business skills instructor and course developer based in Egypt, whose clients include firms like Banque Misr and Raya Holding. He designs customized high-impact workshops where he introduces proven strategies and the latest practices in the field of presentation, leadership and sales training.

How to Win Bigger Deals and Avoid Getting Ghosted

How to Keep Your Sales Team Intact During the Great Resignation

For Your Eyes Only: BenQ Eye Care Monitor GW2480T