Robert Herjavec to Immigrant Entrepreneurs: 'People Don't Care About Your Color, Religion or Sex. They Care About the Value You Add.'

“Sometimes it feels like you’ll never fit in,” Robert Herjavec says of being an immigrant entrepreneur.

The Shark Tank star investor, a self-described “guy off the boat” immigrant himself, knows the feeling intimately. When he was 8 years old, he moved with his family to Toronto, Canada, from Zbjeg, Croatia, (formerly Yugoslavia) on the heels of his outspoken father’s escape from jail in the communist country. The Herjavecs’ only belongings when they moved into an acquaintance's basement were the clothes on their backs, the shoes on their feet, $20 and a suitcase.

"Who would've thought a kid from Croatia would make it.." You're the man @robertherjavec ?? pic.twitter.com/mRxCdtWVer

They may have fled to a free country, but as impoverished refugees, assimilating to the culture in a strange, new world came at a steep emotional cost. Herjavec was bullied and beat up at school for his “uncool” clothes and heavy Serbo-Croat accent. “When I told my mom, she would say, ‘Robbie, nobody in this world is better than you and you are no better than anyone else,’” he told Entrepreneur. Complaining wasn’t tolerated.

Growing up, Herjavec often felt like an outsider, seeing his father walk two miles to and from his factory floor-sweeping job and watching his mother lose all of the family’s savings (only $500) to a swindler vacuum salesman. “I realized that compared to everybody else, we were really poor," he told Business News Daily.

By the time he was 14, the ambitious future multi-millionaire decided he wanted to give his family a better life, beyond anything they "could have imagined back in Croatia." The path to that better life, he told his parents, was to be his own boss -- someone who could “never be fired or laid off,” like the factory workers his father toiled alongside. He wanted to be someone who could have “the freedom to control your schedule and to do with it what you want.” He wanted to be an entrepreneur.

http://twitpic.com/sp7jg - Part of orginal house I grew up in - I look at that in wonder at journey we can take in life

After a string of menial jobs, including waiting tables and delivering newspapers, Herjavec worked his way up and eventually did become that someone he wanted to be. With the launch of his first venture -- a tech company called BRAK Systems that he later sold to AT&T for an undisclosed but surely tidy sum -- he made his dreams come true. He was an independent immigrant entrepreneur in charge of his own financial fate, and it wasn’t a stroke of luck. It was the result of working hard to live better. 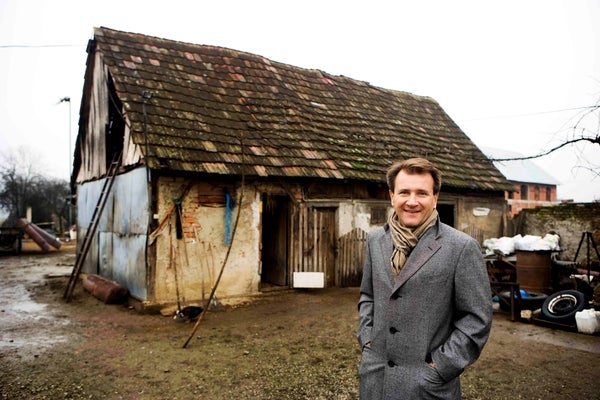 He "believed" he could succeed and succeed he did, beyond his wildest dreams.

“There are those who have been blessed by the gods of destiny and are preordained to be successful, and I wasn’t one of those,” he told Entrepreneur earlier this week from the Culver City, Calif., set of Shark Tank. “I’m one of the ones who became successful because of incredible pain in their life, who knew they just couldn’t take it anymore and wanted to change.”

Just as the transition from Eastern European immigrant to naturalized Canadian citizen didn’t come easy to him, neither did segueing from employee to entrepreneur, as it often doesn’t for many immigrant business owners who struggle to adapt to their adopted country’s language, customs and social norms while trying to make a living.

“I think it’s really hard when you’re an immigrant entrepreneur,” Herjavec says. “You never feel like you’re blending in.” But feeling out of place doesn’t have to stop you from finding your place as a successful entrepreneur, no matter who you are or where you’re from.

To glean more of Herjavec’s advice, check out Shark Tank’s Season Eight premiere on your local ABC station. It airs on Sept. 23 at 9 p.m. ET.