Crowdfunding Your Startup: Be Prepared To Work For It

This article was co-written with Yasmine Akermark Morrison, co-founder, Tibba.

Most startups I know in Europe and the US have used some form of crowdfunding as part of their funding and marketing strategies. There are a lot of good reasons for this, and I’m sure crowdfunding will increase in popularity in the Middle East over the coming year. But, at the same time, let’s not fool ourselves: crowdfunding is not as easy as creating a profile and then watching the money roll in. In fact, I’d say it is probably one of the most time-consuming ways you can use to raise funds, and a badly prepared campaign will do more harm than good.

We successfully completed our Kickstarter crowdfunding campaign for Tibba, a peer-to-peer skill-sharing platform for small businesses and freelancers in June, and it was a massive learning curve. There were midnight calls to the Kickstarter support center in New York when the video on our campaign page stopped working, messages from various people that tried to pledge but couldn’t get through the payment gateway, hundreds of emails from PR companies that threatened the failure of our campaign if we didn’t enlist their services, and on the top of it all, we also had to continue to actually work on building our business as well.

Keeping that in mind, here are some insights from our crowdfunding experience that, hopefully, could be of help to you and your enterprises as well. 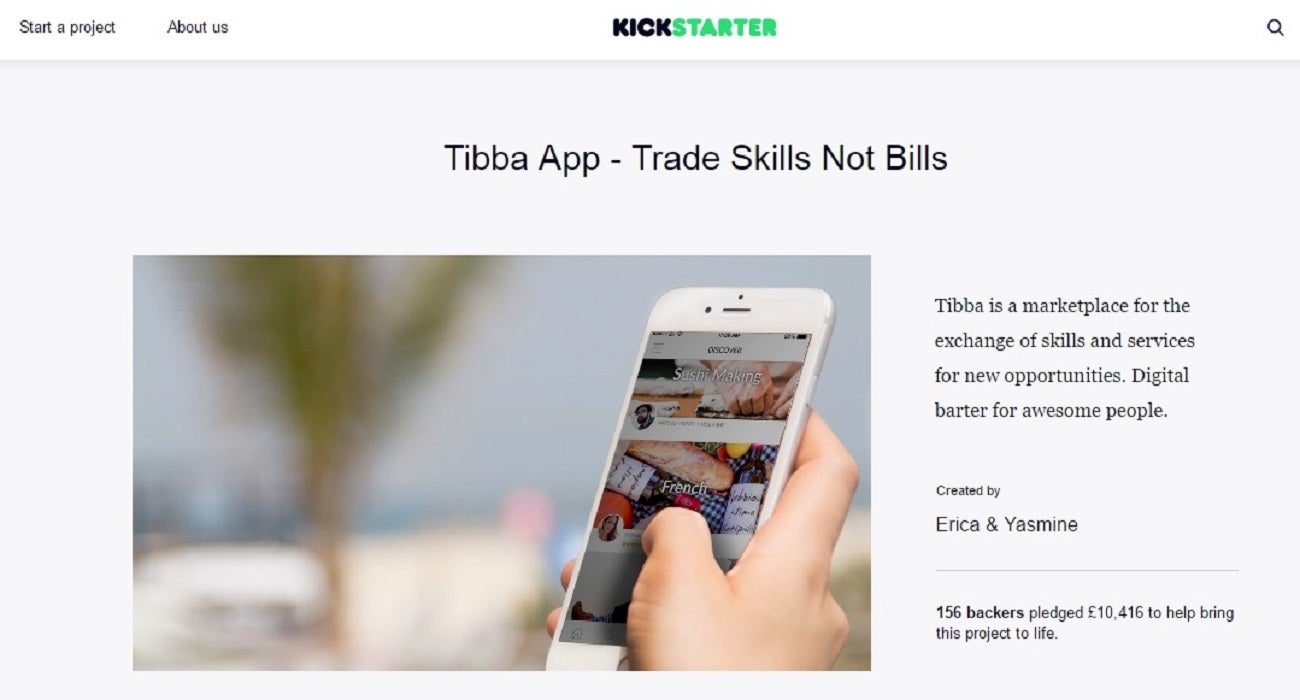 Related: Five Tips For Entrepreneurs Embarking On A Series A Raise

Crowdfunding platforms like Kickstarter and Indiegogo allow you to test the potential demand for a new product, before you actually start manufacturing it. Contrary to what most people think, don’t consider it as just a way to fund your company. Think of it instead as a way of creating your first minimum viable product (MVP), and to see if people really want what you’re offering. Once you gauge that interest, then you can go look for bigger funding sources.

How much should you raise with your crowdfunding campaign?

Don’t just pick a number that sounds good- it has to be reasonable and achievable. It’s better to have a lower figure and get overfunded, than not reach your target at all. After all, Kickstarter is an all or nothing game- if you don’t reach your target, you don’t get anything. We picked a relatively low figure that we were sure we would be able to reach. You can always add stretch goals later.

It’s all about preparation

If your idea of crowdfunding is to put together a campaign and then hope for the best, then rest assured that it isn’t going to pan out the way you want it to. Organizing a crowdfunding campaign is a lot of hard work, and it will take months to prepare. Take a look at the successful campaigns. They are pretty slick, right? That should be the standard you’re competing against. The campaign has to be visually appealing and contain the right information, but that’s actually the final stage of the process. The hard part is getting people to actually visit your page.

Contrary to popular imagination, crowdfunding platforms aren’t full of kind-hearted individuals or early adopters looking for their next purchase. From our analysis, we had to pull around 96% of all pledges to the site ourselves. Kickstarter supplied a paltry 4% of pledges (the US$1 kind) and they took close to 10% of our funds (with all the transaction fees)– yes, it’s a pretty good business for them!

Unless you become a “Staff Pick” or something similar, you can safely assume Kickstarter will do nothing at all to promote you, and thus, you become solely responsible for pulling all the traffic to your page. And in the end, you then get to pay Kickstarter commission for the pleasure as well. (I’m not bitter!)

So, with that in mind, you’ve got to get really serious about marketing your crowdfunding campaign. We’ve posted a lot more detail on our blog about our marketing campaign (including templates of emails and our overall strategy), so if you’re interested, do check it out at www.gotibba.com/ blog. For those of you that prefer a summary or an overview, consider the following:

1. Focus on markets that matter

It’s so easy to waste hours on something that looks cool but yields no result at all, so be strategic about your efforts. Besides friends and family, who would actually pay for your product right now? At the end of the day, Kickstarter lets you pre-sell your items to an audience before you actually manufacture the items, so don’t waste time on marketing strategies that don’t target the right people. An article in a niche magazine with readers that would love your product is a lot better than a national newspaper. It’s cool seeing your name in print, yes, but remember that today’s newspaper is tomorrow’s garbage. Digital lives on. Focus on digital sources, rather than print media.

Don’t do adhoc responses to everyone, or rewrite the same email a million times. If you are approaching bloggers or writers in a specific area, then spend your time on a great template email that can be personalized according to the circumstances, rather than rewriting the same thing each time. If you’re super prepared, you can do a whole folder of responses and emails, and then ask friends and family to help out. If it’s all at their fingertips, then it’s a lot easier to delegate.

3. Get engagement from your network

Identify the connections or influencers you already have in your own personal network. An introduction from a friend is a lot likelier to get you an article than a cold email (not least because if they ignore you, there is always the awkward possibility of running in to you at a social event. Or your friend. Awks). Find out how you are connected to the people you want to reach (try LinkedIn or Facebook), and don’t be shy about reaching out to people. Next, get your ten closest friends, and ask them to think of ten other people that would be interested in your product, and then ask them for introductions.

Set up a Facebook event with a countdown to your launch. Get all those people to commit to sharing your news and updates (and to pledge at least $1 each). People like to follow trends and to back a winner. Before you launch, you should already know that you’ll reach at least 20% of your target in your first 24 hours. If you can’t even get your friends to back your project, then you’re in trouble! If all your friends are behind it, you’re on to a winner!

We found out (too late) that digital products and apps in particular tend to do rather poorly on crowdfunding platforms. It took a lot of work for us to hit the target, and, to be honest, in hindsight, I’m not sure it was worth the hassle. There are far easier ways of getting cash, and we’ve had far more successful marketing campaigns. That said, it’s done, we got what we needed, and we really learnt a lot from the experience. The best thing is that it forced us to get out there and start connecting with our community.

We’ve had a lot of really cool (and useful) introductions come out of the campaign (albeit indirectly), and a number of investors approached us following the successful completion of our Kickstarter campaign- to them, it’s a sign of credibility and future demand. So, if you go for a crowdfunding campaign, then really go for it. Crowdfunding can give your startup a real boost, but nothing worth having ever comes easy, and crowdfunding is no exception.

4 Ways to Generate Investor Interest, Even When Funds Are Scarce

Fundraising Vs. Bootstrapping: How To Decide What You Need For Your Tech Startup

Translation Platform Tarjama Raises US$5 Million In Series A Round