By Angela Moscaritolo October 31, 2016
This story originally appeared on PCMag

A new report claims that Facebook is letting advertisers discriminate based on race.

ProPublica reports that the social network lets advertisers narrow their audience by "Ethnic Affinity," or, in other words, exclude people who are African-American, Asian or Hispanic. The NYC-based investigative journalism nonprofit posted a screenshot from Facebook's self-service advertising portal showing this racial exclusion option: 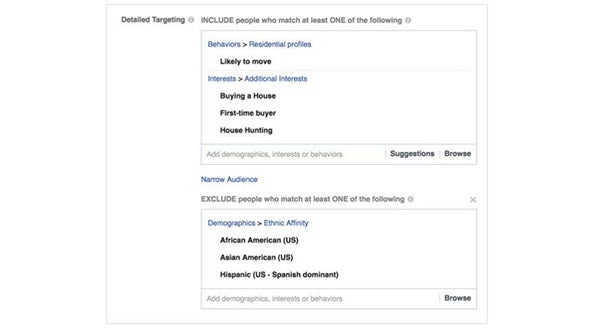 So basically, if someone wants to ensure that African-Americans -- or Asians or Hispanics -- don't see their housing ad, they can. That's not only shocking, it's illegal, according to the report.

As ProPublica points out, federal law prohibits housing and employment advertisements that exclude people based on race, gender and other factors. Specifically, the Fair Housing Act of 1968 makes it illegal to "make, print or publish, or cause to be made, printed or published any notice, statement or advertisement, with respect to the sale or rental of a dwelling that indicates any preference, limitation or discrimination based on race, color, religion, sex, handicap, familial status or national origin."

"This is about as blatant a violation of the federal Fair Housing Act as one can find," the site quoted him as saying.

Facebook on Friday published a blog post from its Head of Multicultural, Christian Martinez, who argues that "most of the leading companies in the online ad space offer multicultural advertising options," including "exclusion targeting." The tool would, for instance, allow a nonprofit that's hosting a career fair for the Hispanic community to reach people who have an interest in that community.

Martinez said that Facebook's policies prohibit discriminatory advertisements like for "an apartment building that won't rent to black people or an employer that only hires men."

"If we learn of advertising on our platform that involves this kind of discrimination, we will take aggressive enforcement action," he added.

Facebook also argues that Ethic Affinity isn't technically the same as race. The company determines Ethnic Affinity based on pages and posts you have liked or engaged with.

"When we asked why 'Ethnic Affinity' was included in the 'Demographics' category of its ad-targeting tool if it's not a representation of demographics, Facebook responded that it plans to move 'Ethnic Affinity' to another section," ProPublica reports.