How VR Holograms Can Train Everyone From Hairdressers to Astronauts

Startup 8i turned Buzz Aldrin into a hologram to train future Mars astronauts, but it's just getting started.

By Sophia Stuart January 3, 2017
This story originally appeared on PCMag

Wouldn't it have been amazing to sing backup for Bowie, sit in the front row of a lecture by Einstein, visit the lab with Marie Curie or gaze into outer space with Buzz Aldrin?

Sadly, the first three are no longer with us, but Buzz is and he's been digitized as a volumetric hologram by VR/AR startup 8i so he's future-proofed for eternity.

8i started in New Zealand and has several staffers, including co-founder and CTO Eugene d'Eon, who worked with Lord of the Rings director Peter Jackson at Weta Digital. 8i recently opened an L.A. offshoot, in a temporary space on a soundstage at Culver Studios (where Orson Welles's Citizen Kane and the 1960's-era Batman TV show were both filmed) while its new office is being constructed. PCMag met up with CEO Linc Gasking -- who sold one of his earlier startups, countingdown.com, to Dreamworks -- to get a demo and find out what's on the slate for 2017.

Unlike many VR houses, 8i has an actual business model and clients, including NASA and Time Inc. It just released a high-profile VR digitization of Matrix Academy, an educational tool for hairdressers, for L'Oréal. The company trained more than 2 million hairdressers globally in 2015, but with the new VR tool, student numbers will increase exponentially.

The off-the-shelf rig 8i used for the Matrix project has "40 Point Grey cameras, with Sony CMOS sensors, pointing in, rather than out," Gasking said. "The cameras capture a multitude of angles simultaneously which are sent to the cloud for processing using 8i's patent-pending software, to create a volumetric hologram." 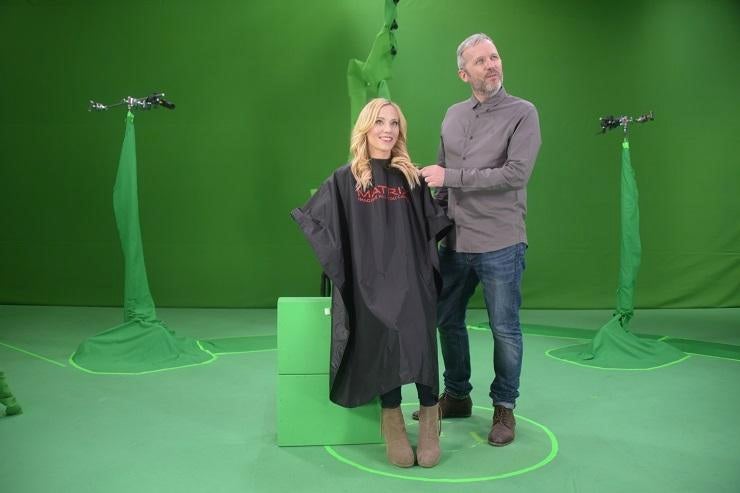 Volumetric VR means "you're free to move around the person you're watching as if you're in the same room, and it has presence which tricks your mind into thinking that you really are there," he said, which heightens "the emotional connection far beyond the limited experience of 360 video."

Rachel Weiss, VP of Innovation and Entrepreneurship at L'Oréal, told PCMag she saw 8i's demo at CES 2016 and was instantly taken with the tech.

"We recognized early on that VR could have a profound impact on the highly visual and community-driven beauty industry and wanted to create an experience that was incredibly lifelike. After a few minutes testing the experience [at CES], we knew immediately they were the right partner for us.

"The one technical challenge along the way has been rendering hair, which is one of the hardest aspects to get right in the 3D reconstruction of humans," she said. "8i has worked closely with us to tackle this issue and we're looking forward to bringing the full experience to market in 2017." 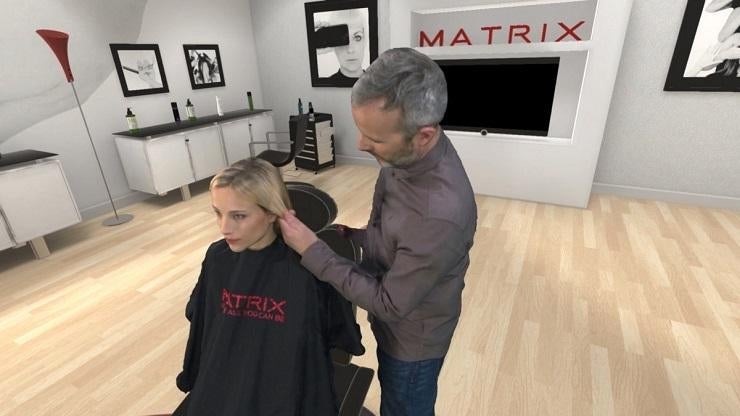 Gasking pointed out that the new VR teaching tool will enable top stylists to cut down on physical travel, as well as reach more potential students worldwide, pretty much instantly. "You can get up close and actually see what's happening without having to physically be there. The other thing that's important is it's an actual person -- it's not a computer-generated figure -- it feels real, because it is."

I can attest to this. When I did the demo, there was something in my brain that wouldn't let me walk through the hologram, even though, logically, I knew it was digital. It was most curious.

Here's what happened: I put on the HTC Vive and headphones. Suddenly, a Matrix stylist materialized, welcomed me and explained the day's tasks. I quickly took a full 360-degree scan of the room and the illusion was complete. My head believed it was inside a hair salon. We cut -- seamlessly, as if I'd done a time lapse body jump -- to another room and I peered up close, watching the stylist explain flat-iron techniques on a hair model. You can see how students will find this VR tool entirely normal pretty soon.

On the soundstage, we got a sneak peek at some more evolved high-end holograms for proof-of-concept "wow" pitches, including examples from the R&D lab in New Zealand of upcoming holograms. It's also too early to talk about specifics, but communications chief Amy Sezak indicated 8i will put out a commercial version of its software sometime in 2017.

What's really interesting about 8i is that, unlike many other companies, it has flipped the digital fabrication process. Instead of starting with motion capture and building a digital avatar from that framework, it went the other way, most noticeably with the recent project for Time magazine with Buzz Aldrin, who recorded messages for scientists training for Mars missions. 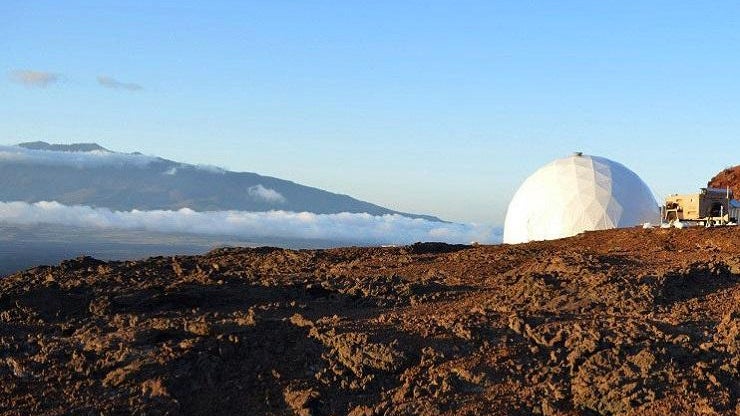 Six people lived at a University of Hawaii Mars simulation site from August 2015 to August 2016 in order to study the effects of long-term isolation. They received holographic recordings of Aldrin and vocal artist/comedian Reggie Watts, "which when viewed in virtual reality, simulate true presence and could help mitigate the feeling of isolation," according to 8i.

Those recordings will be released to the public in early 2017 as part of the Time Live VR project. Those with Google Cardboard or VR headsets like Gear VR, Oculus Rift and HTC Vive can download the app and experience Aldrin and Watts in VR.

"As with the Buzz Aldrin example, we are focused on getting the VR industry to take a leap over the 'uncanny valley,'" Gasking said.

8i cannot confirm or deny this, but the reason a move to L.A. must have made sense, is that Hollywood studios are looking to digitize their movie stars for eternity. Bearing in mind his company's technology now makes this possible, which important figure from history does Gasking wish he could still interact with?

"I'd really like to have heard first-hand from New Zealander Edmund Hillary about his experiences climbing Everest, that's for sure," he told PCMag.

Wouldn't it be brilliant, rather than purchasing an audiobook and listening to it on a digital device, if one could rent a hologram of Douglas Adams, who would sit on the other end of the sofa and read those immortal lines: "Far out in the uncharted backwaters of the unfashionable end of the Western Spiral arm of the Galaxy."

Adams is no longer with us either, but many geek-favored writers are. Let's hope they are booked into the 8i soundstage by their publishers soon.