By Allison Sullivan February 13, 2017
Opinions expressed by Entrepreneur contributors are their own.

Last Sunday, the New England Patriots overcame a 25-point deficit to beat the Atlanta Falcons in Super Bowl LI. During commercial breaks, brands large and small were spending upwards of $5 million apiece to overcome their own deficits -- who knows about their brands? Are people willing to use their products? Do people even remember the ads in the first place?

In other words, were those millions worth it? If so, how?

While most people were debating which ads were funnier (we vote Melissa McCarthy), we were engaged in a different type of game -- measuring which ads actually moved the needle on brand awareness, brand recall and product consideration.

Here’s how we did it: Using Civis Research, we conducted a series of brand and message tests before and after the Super Bowl for three ads -- TurboTax, Wix and Buick -- to see the real-world impact of their advertising.

These were all amusing ads, but which one provided its brand the highest lift?

According to the 1,200 people we sampled, Buick’s "Not So Pee Wee Football" is the slight winner, edging out the others on consideration and getting high recall. Wix’s action-packed ad, starring Jason Statham and Gal Gadot, provided the highest average lift in awareness. TurboTax’s ad, while creative, boosted recall, but didn’t have a strong effect on consideration. 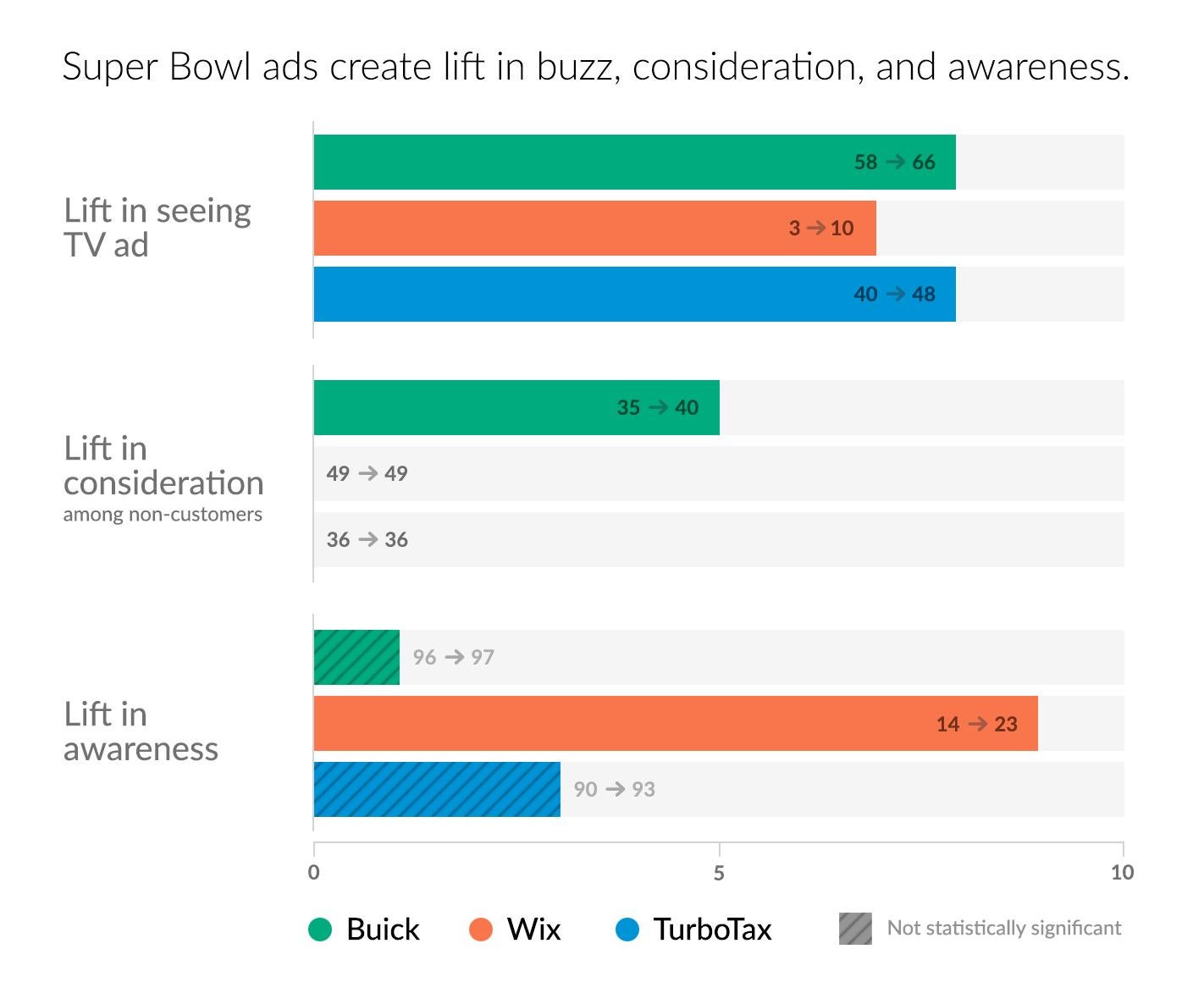 Overall, these results make sense -- Wix is expanding but less known to U.S. consumers than Buick or TurboTax. It simply has a lot of room to grow.

Buick’s ad is -- statistically speaking -- a strong success. People remember it, and a lot of people who weren’t considering Buick are considering it now. Cam Newton, well done.

Here are the specific results for each ad:

TurboTax: Nobody forgets the Humpty Dance.

Despite TurboTax’s widespread basic brand awareness, the Humpty Dumpty spot had a positive impact for the TurboTax brand in terms of general buzz.

Our pre-Super Bowl numbers showed that the industry-leading tax preparation software already had extremely high awareness; 90 percent of Americans had heard of TurboTax. For TurboTax, advertising in the Super Bowl is unlikely to influence basic awareness, and we found no change after the game.

But did the Humpty Hospital ad have any effect? 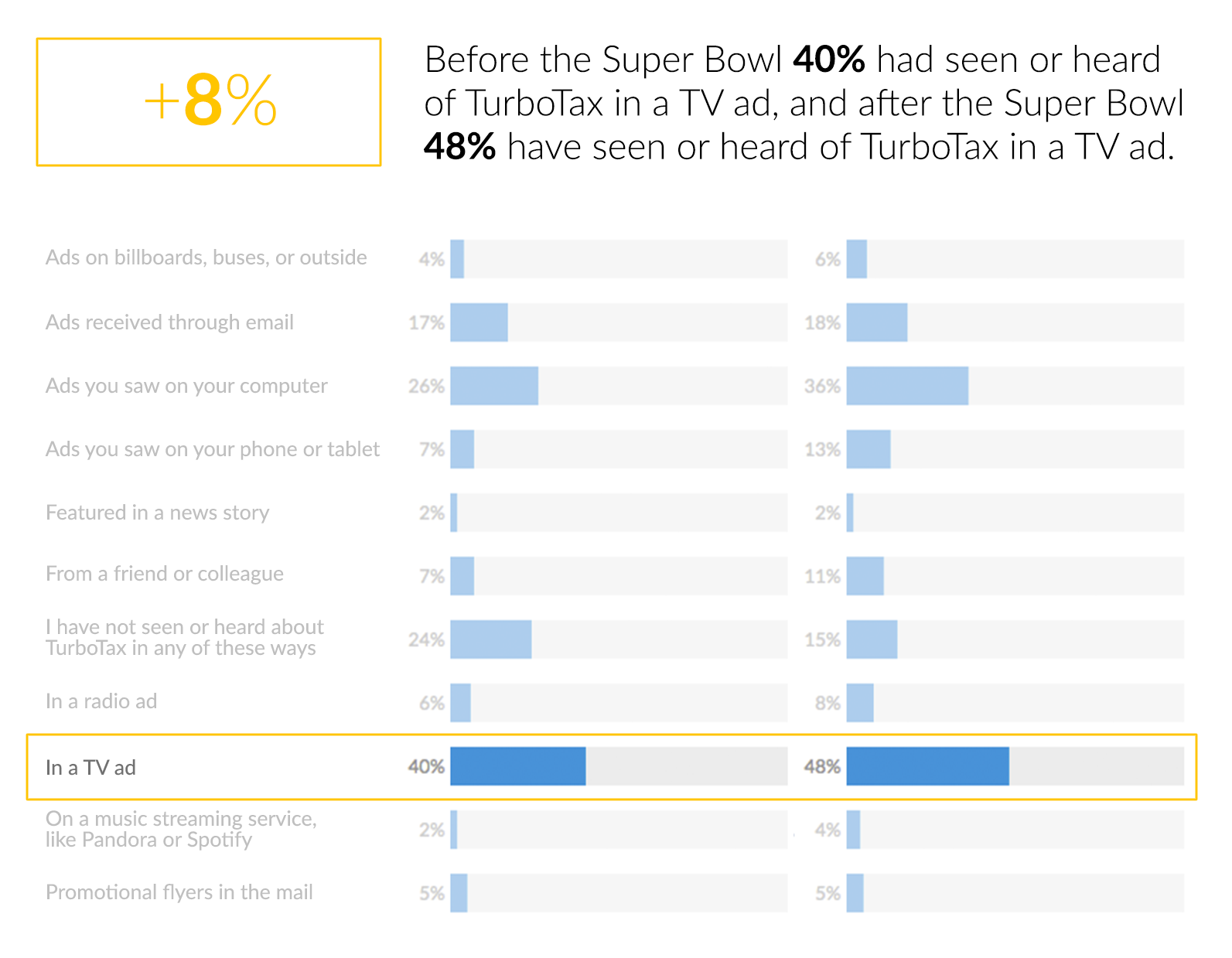 Next, we looked at the effects of Super Bowl advertising on Wix, a website creation company, and those of its competitors.

Wix featured action stars Jason Statham and Gal Gadot to punch up its Super Bowl spot, while GoDaddy’s ad referenced a host of internet fads, and Squarespace brought in John Malkovich. Prior to the game, 14 percent of people had heard of Wix, 75 percent GoDaddy, and 15 percent Squarespace. We threw in an additional competitor, Weebly, who did not advertise in the Super Bowl, for comparison.

General population awareness of Wix increased by nine percentage points after the Super Bowl, from 14 percent to 23 percent. Squarespace saw a similar increase, from 15 percent to 22 percent. GoDaddy, the brand with the largest recognition before the game at 75 percent, did not show an increase in awareness. Our control brand, Weebly, did not display major changes in awareness.

Featuring Cam Newton and Miranda Kerr, Buick pulled out all the stops to gain attention during the Super Bowl.

Like TurboTax, Buick has extremely high awareness, but unlike TurboTax the proportion of respondents who report being a current consumer of the brand is low. This ad improved consideration from 35 percent to 40 percent, which is a good outcome for Buick’s repositioning effort.

We took this test one step further to understand the impact of the message and its effectiveness among fans -- a valuable lesson for any brand. Overall, Falcons fans responded well to Atlanta-native Cam Newton’s ad, but Patriots fans did not.

Are big budget, big splash ads right for your business?

With over half of Americans watching the big game, it’s easy to understand the appeal in advertising, but measuring the impact of the ads on brand health raises a bigger question. The data speak for themselves, but accurately measuring spend and effectiveness should be top of mind before making a big investment. Based on our research this year, established, industry-leading brands can generate buzz and stay high in potential customers’ consideration set, while up-and-coming brands can increase their awareness quickly to a large audience. At the end of it all, any brand can benefit from a carefully considered measurement project for an ad campaign -- no matter how big or small the spend on the campaign.

Will CTV Advertising Continue Its Reign in 2022?