Setting Standards: The Penalty of Leadership

It’s often seen that difficult situations encourage creative thinking and resourceful solutions, and this holds true for automotive giant Cadillac too. In the year 1915, when competition was seen to be shaking up Cadillac’s numero uno status, the brand responded with an advertisement that remains etched in history. A former newspaper reporter and a copywriter, Theodore F. MacManus penned a revolutionary advertisement for Cadillac, which is said to have reversed the company’s business fortunes at that point in time, and continues to be seen today as an example of a persuasive copy. Titled The Penalty of Leadership, the ad ran only once (January 1915) in the Saturday Evening Post, and without even one mention of Cadillac cars or its utilities, the ad defined the brand identity of the auto company, giving it an edge over competitors. Doing away with the then popular style of explaining why a consumer must pick the brand over others, the ad describes the penalties in store for people striving to maintain high standards of excellence (to the level of Cadillac), stating: “Whether the leadership be vested in a man or in a manufactured product, emulation and envy are ever at work.” 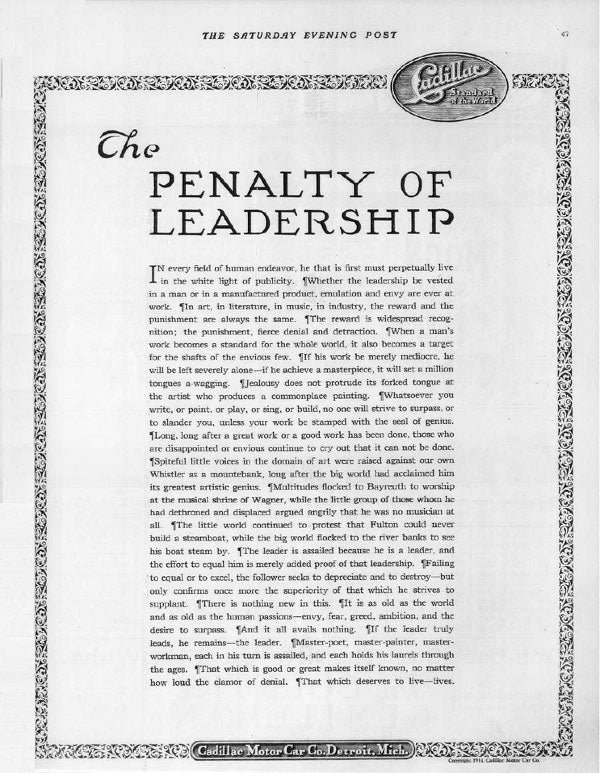 Advertising industry observers opine that the power of the work lies in its success in declaration the brand’s dominance, saying that irrespective of what others might say, the Cadillac-owning populace are leaders in their own right. By saying, “That which is good or great makes itself known, no matter how loud the clamor of denial. That which deserves to live – lives,” the company was essentially telling its prospective buyers that among other things, in a Cadillac, they would rise above all others, despite the naysayers. If one had any second thoughts on the impact and popularity of the work, know that besides bagging a slew of industry awards, both Cadillac and the agency MacManus, John & Adams reportedly received requests for a copy of The Penalty of Leadership almost every week in the 30+ years after it was written. Not just that, Elvis Presley, who was a big fan and kept a framed copy in his office at Graceland, is also said to have helped pushed the work into limelight.

Here’s the text of Cadillac’s iconic The Penalty of Leadership advertisement reproduced below:

“In every field of human endeavour, he that is first must perpetually live in the white light of publicity. Whether the leadership be vested in a man or in a manufactured product, emulation and envy are ever at work. In art, in literature, in music, in industry, the reward and the punishment are always the same. The reward is widespread recognition; the punishment, fierce denial and detraction. When a man’s work becomes a standard for the whole world, it also becomes a target for the shafts of the envious few. If his work be mediocre, he will be left severely alone – if he achieves a masterpiece, it will set a million tongues a-wagging. Jealousy does not protrude its forked tongue at the artist who produces a commonplace painting. Whatsoever you write, or paint, or play, or sing, or build, no one will strive to surpass or to slander you unless your work be stamped with the seal of genius. Long, long after a great work or a good work has been done, those who are disappointed or envious, continue to cry out that it cannot be done. Spiteful little voices in the domain of art were raised against our own Whistler as a mountback, long after the big world had acclaimed him its greatest artistic genius. Multitudes flocked to Bayreuth to worship at the musical shrine of Wagner, while the little group of those whom he had dethroned and displaced argued angrily that he was no musician at all. The little world continued to protest that Fulton could never build a steamboat, while the big world flocked to the river banks to see his boat steam by. The leader is assailed because he is a leader, and the effort to equal him is merely added proof of that leadership. Failing to equal or to excel, the follower seeks to depreciate and to destroy – but only confirms once more the superiority of that which he strives to supplant. There is nothing new in this. It is as old as the world and as old as human passions – envy, fear, greed, ambition, and the desire to surpass. And it all avails nothing. If the leader truly leads, he remains – the leader. Master-poet, master-painter, master-workman, each in his turn is assailed, and each holds his laurels through the ages. That which is good or great makes itself known, no matter how loud the clamor of denial. That which deserves to live – lives.”