With HomePod, Apple Just Wants to Shake Things Up (for Now)

By Sascha Segan June 7, 2017
This story originally appeared on PCMag

Apple's HomePod speaker is a depth charge dropped into the ocean where Google Home and Amazon Echo sail. At $349, it's not going to dominate the voice assistant world. But for Apple to achieve its goals, the HomePod just needs to keep the waters rough enough to make its competitors seasick.

There are a bunch of weird things about Apple's HomePod announcement. First, Apple doesn't like to announce products six months in advance. And while the iPhone and iPad are expensive, they're not double the prices of rivals. The HomePod is also being sold as a music device above all else rather than virtual assistant.

One interpretation is that Apple isn't going after competing voice assistants but the midrange, wireless multi-room speaker market; the domain of companies like Sonos, Bose and Logitech. Yes, those companies have $200 options, but the Sonos Play:3 costs $299, and the Bose SoundTouch 20 costs $350. Those companies have been slow to adopt the kinds of flexible voice capabilities we've seen on Echo and Google Home, and they tend to appeal to a higher-end consumer who thinks the Amazon and Google products look and sound cheap. 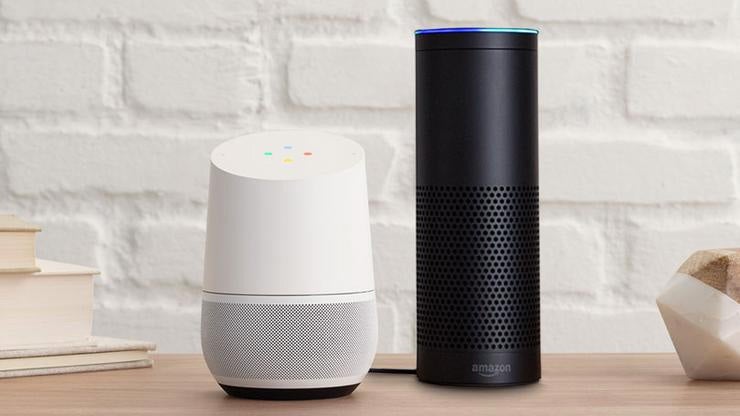 But I think Apple's strategy is a little trickier than that. The midrange speaker market is in fact ripe for disruption, and I think Apple's correct to assume that people who have expensive speakers probably have an iPhone. But by announcing the HomePod six months in advance, Apple's also trying to draw developer attention away from Alexa and Google Home, making sure that it's in second, not third place in the eventual war of the voice assistants.

Second place is a very comfortable place for Apple, because it's focused on profit share rather than market share. In a battle between Apple and Amazon, it's easy enough to see a repeat of the iOS/Android war, where Echo speakers eat up the bottom end of the market while Apple reaps profits at the top. Amazon actually wouldn't mind this, as (like Google with Android, but not like Android phone makers) its business isn't dependent on making a profit from hardware.

Developers can only handle two platforms.

Platforms need developers, and we've seen over and over that the tech world is capable of supporting two -- not three -- platforms in most areas.

On the desktop, it's Mac and Windows, not Linux. On phones, it's Apple and Android, not BlackBerry 10 or Windows Phone. On high-end tablets, increasingly, it's Windows and iOS, with Android shunted down to the low end. Sure, the third platform often manages to hang on as a niche, but the two major ones dominate the market. Developers just don't seem to have the resources to split their attention more broadly.

Right now there are three players in voice assistants: Apple, Google and Amazon. Apple is coming late to the game, but it understands the value of not being third. And as it implied by focusing on music in its presentation, SiriKit is way behind the competition in attracting developers right now.

Apple needs to get SiriKit into the conversation and to make sure Google and Amazon don't lock down voice-assistant developers, which could definitely happen in the next six months. By announcing the HomePod now, Apple throws a bit of confusion into that community; should developers keep their powder dry?

Google is likely to suffer more than Amazon from this, because Amazon has a lot of third-party partners and an already vibrant developer community. Look at our list of Alexa skills vs. our list of Google Home voice actions: Google is just getting started here. Google's speaker also sounds better, and costs more, than Amazon's hot-selling Echo Dot, putting it in a little more danger from Apple's higher-end product.

This doesn't mean that Apple's HomePod is going to be a best-seller. Sure, it could be the next Apple Hi-Fi, an expensive audio accessory that ends up being overlooked for better third-party products. But it keeps the waters roiled, and keeps the Google/Amazon duopoly from fixing in place. When developers can only focus on two platforms, that means at least Apple has a chance.