It’s no surprise that top world leaders and tycoons of the world travel by private jet and luxurious aircraft. Most of them have an entire fleet of aircraft at their disposal and the cost of the fleet may go as high as 1 billion dollars.

Here, we have put forward a summary of a study recently developed by  Air Charter Service, the aviation specialist who arrange everything from government, to cargo and private jet charters. The report depicts the entire story of the private jets, owned by influential world leaders across the globe.

The study reveals the inside story on the air fleets that leaders across the globe travel with, their estimated value, interior modifications and security features.

This is the original source for the list of the private jets of the world’s top leaders, read more for highlights from the  global  report. 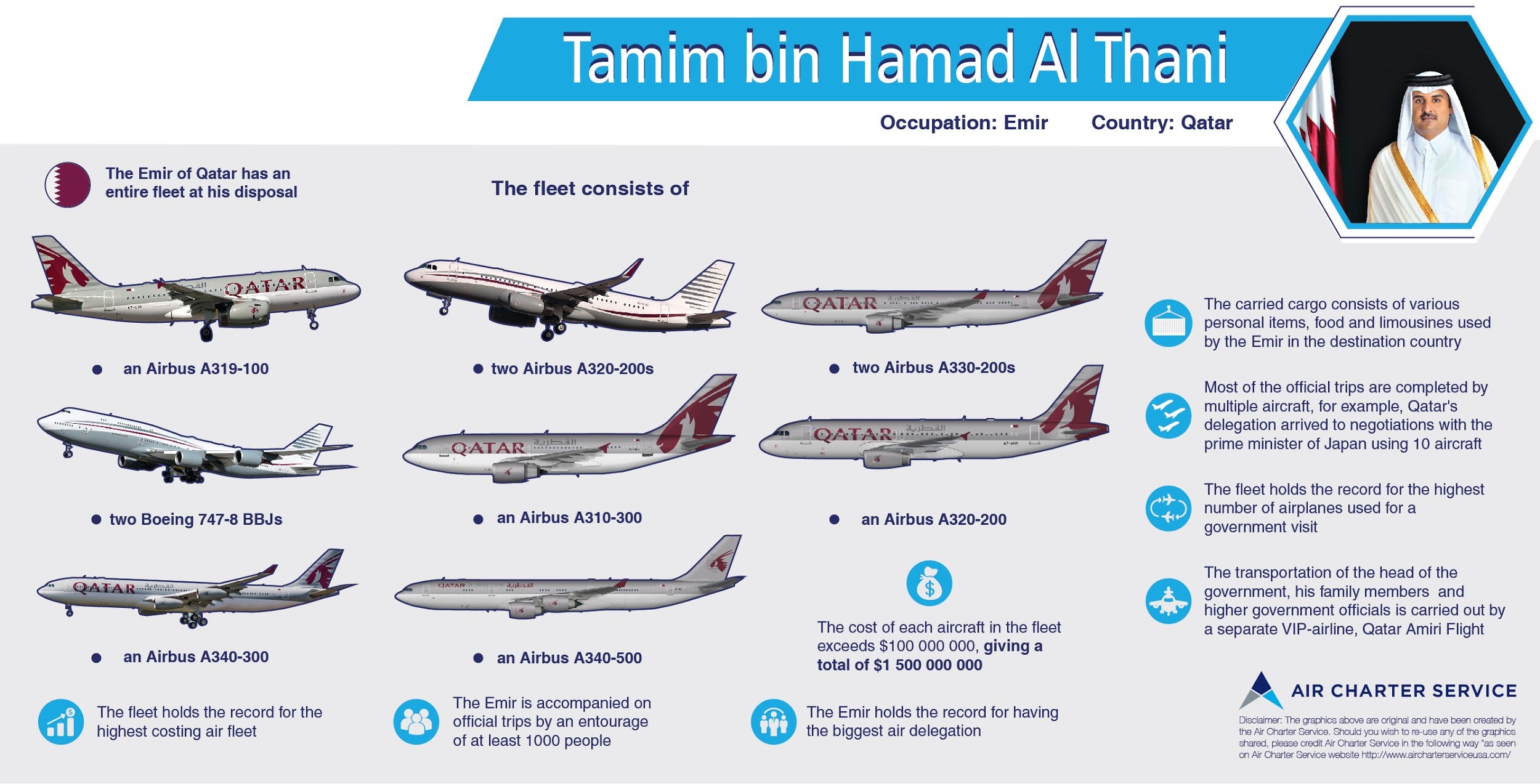 Considered to be one of the wealthiest people in the world, the Emir of Qatar, Tamim Bin Hamad Al Thani has a fleet to the value of around 1.3 billion dollars. His official trips are of such a lavish nature that he is often accompanied by around 1000 people, including family members, delegation members, and  service staff  to attend to, both his and his travel party’s needs.

Often the families limousines and vehicles are transported along with the rest of the items selected to travel with, to be used to transport the royal family in the destination country. Also, reports state that most of his trips are completed with multiple airlines (Once his delegation arrived in Japan using 10 aircraft). 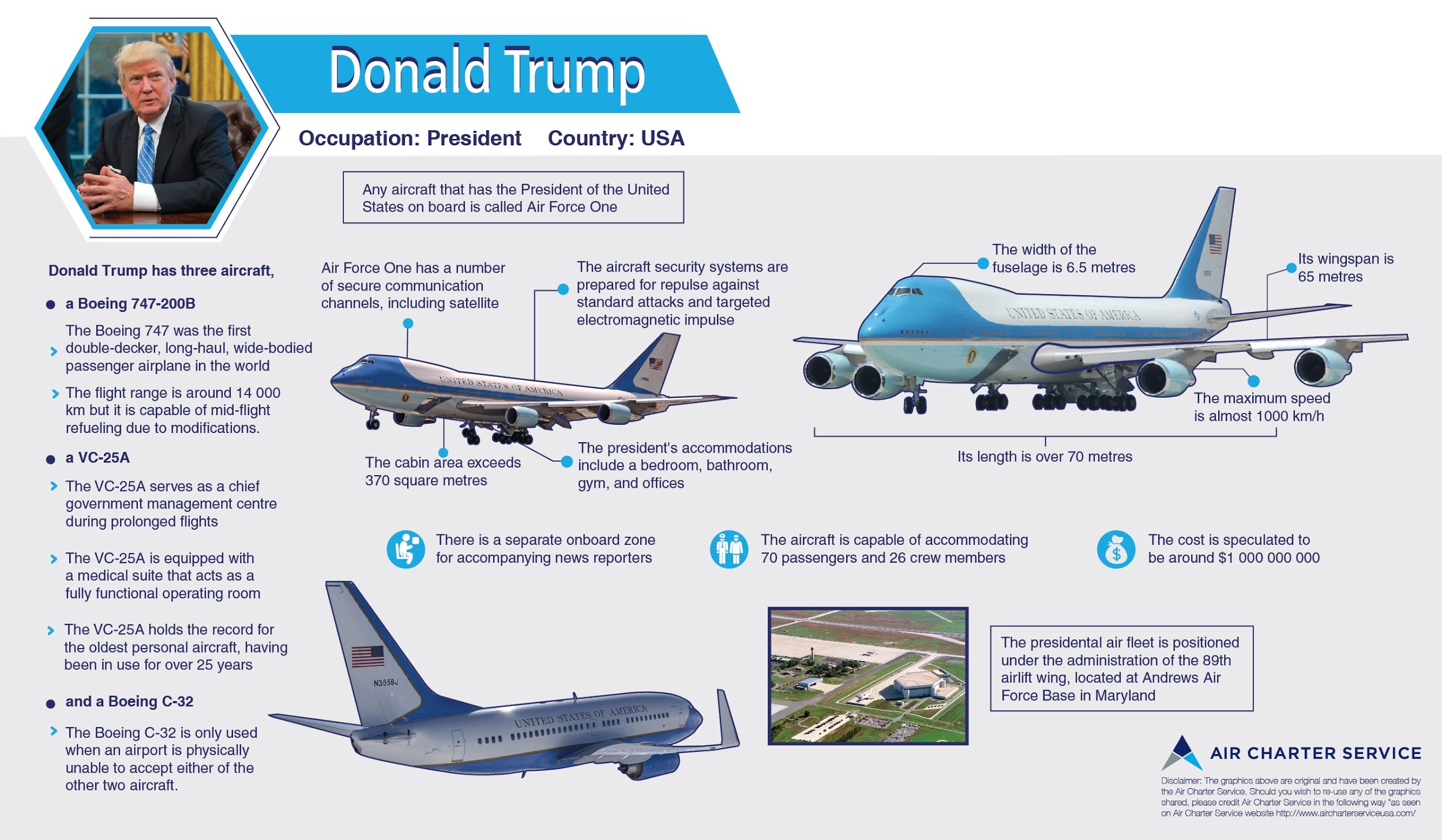 The US President, Mr. Donald Trump features, among the top world leaders reviewed with private jets and the value of the carrier in his use is estimated at 786 million dollars. As is commonly known any aircraft carrying the US President is called the Air Force One. The fleet at the disposal of President Trump features two identical Boeing 747 200B aircraft, which are customized accordingly. Furthermore, a smaller Boeing C-32 is also at his disposal and only used when the airport the president lands at cannot accommodate his standard Boeing 747 200B.

Since the age of these Boeing aircraft is over 25 years,  Trump ironically is in possession of the oldest presidential aircraft in comparison to other world leaders referenced in the original report. 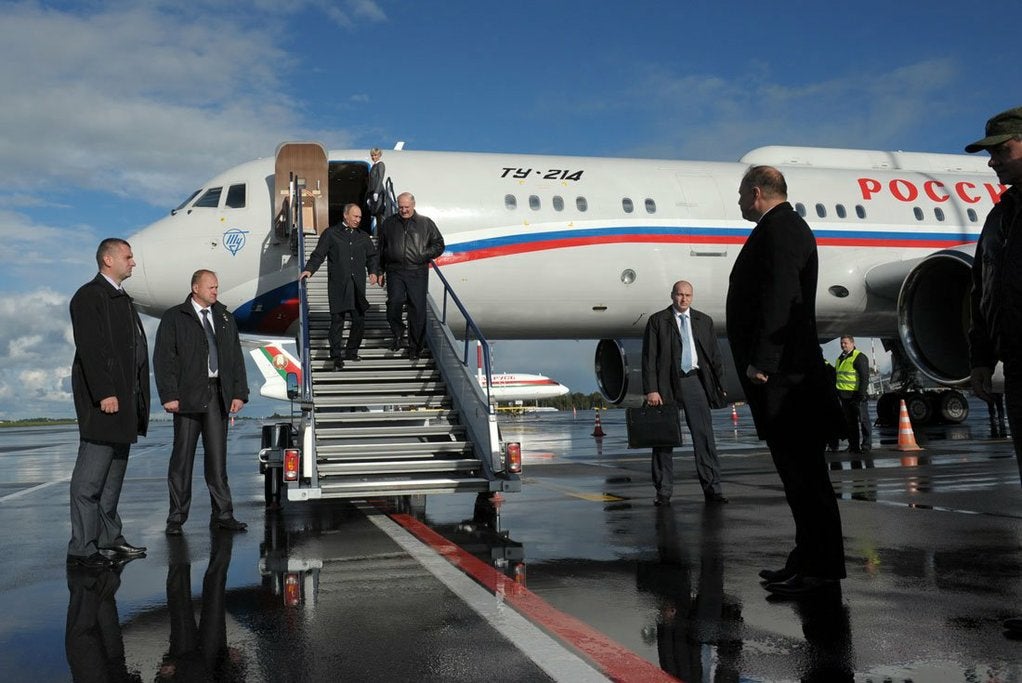 All 4 aircraft are prepared for boarding, and the one in which he will travel remains unknown till the last moment, and thus the remaining three are left behind. 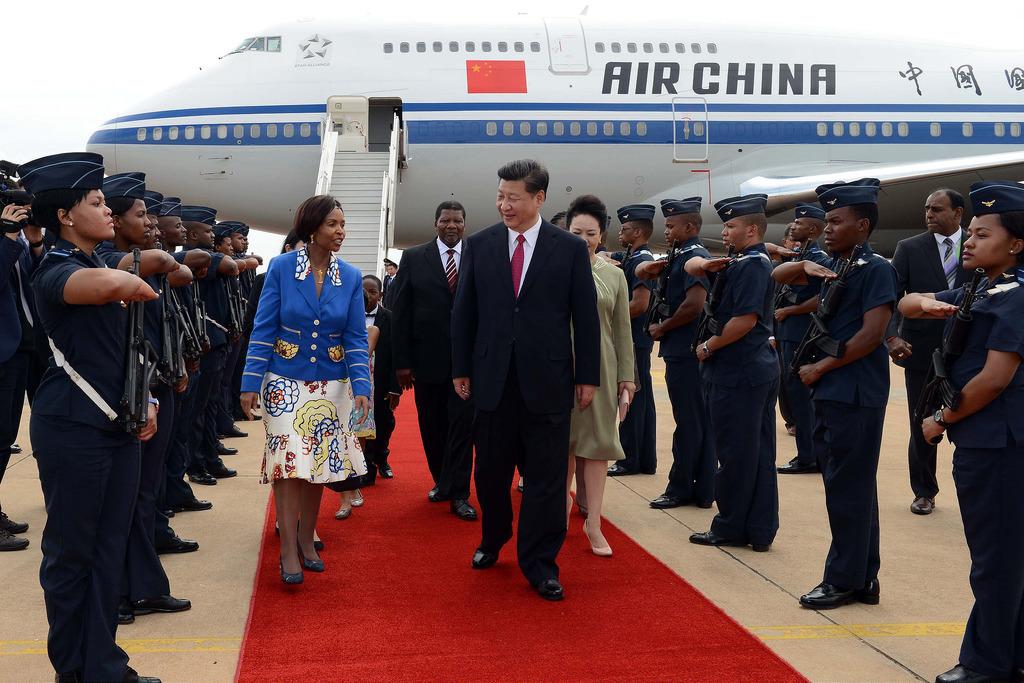 The leader of the People’s Republic of China, Xi Jinping uses two Boeings 747-400, which belong to Air China Airlines and is valued at 250 million Dollars each. As the president makes use of the local airlines and the planes are primarily used for carrying passengers, once a foreign visit is scheduled, the chosen aircraft for his official trip are then  examined carefully and prepared accordingly for the visit. 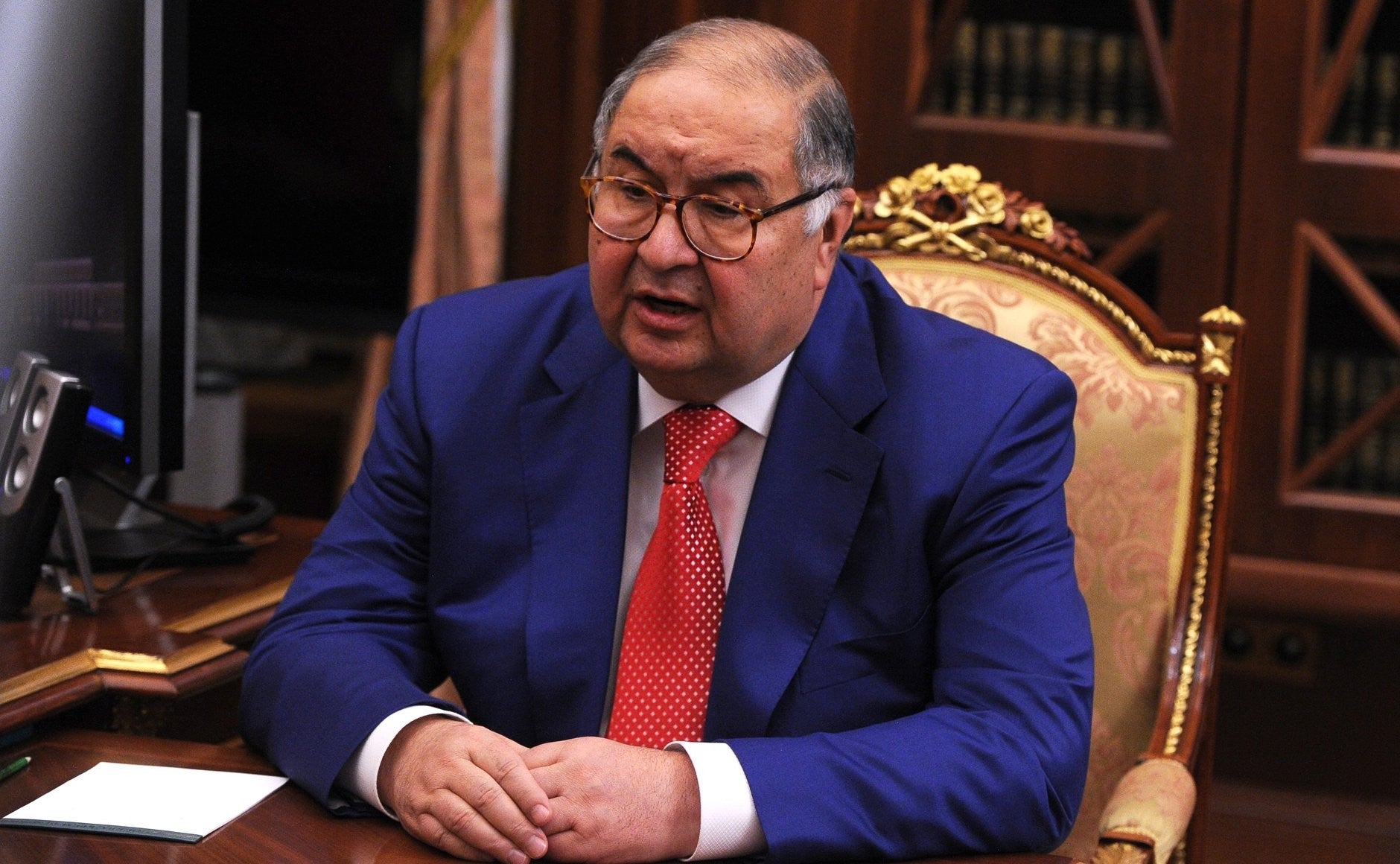 One of the wealthiest people in Russia, Alisher Usmanov owns the biggest business jet in the entire Russian Confederation, named A340-300. The value of his fleet is estimated at 270 million dollars, as per the report created by Air Charter Service.

Another Russian making it into the list, the Chelsea owner ‘Roman Abramovich’ has a number of airplanes in his fleet, with the total value being estimated at around 235 million dollars. The fleet includes a Boeing 767-33AER.

Interior modifications of the Boeing were quite extensive including the addition of a  Banquet Hall and a facility to accommodate around 30 people along with several other features. 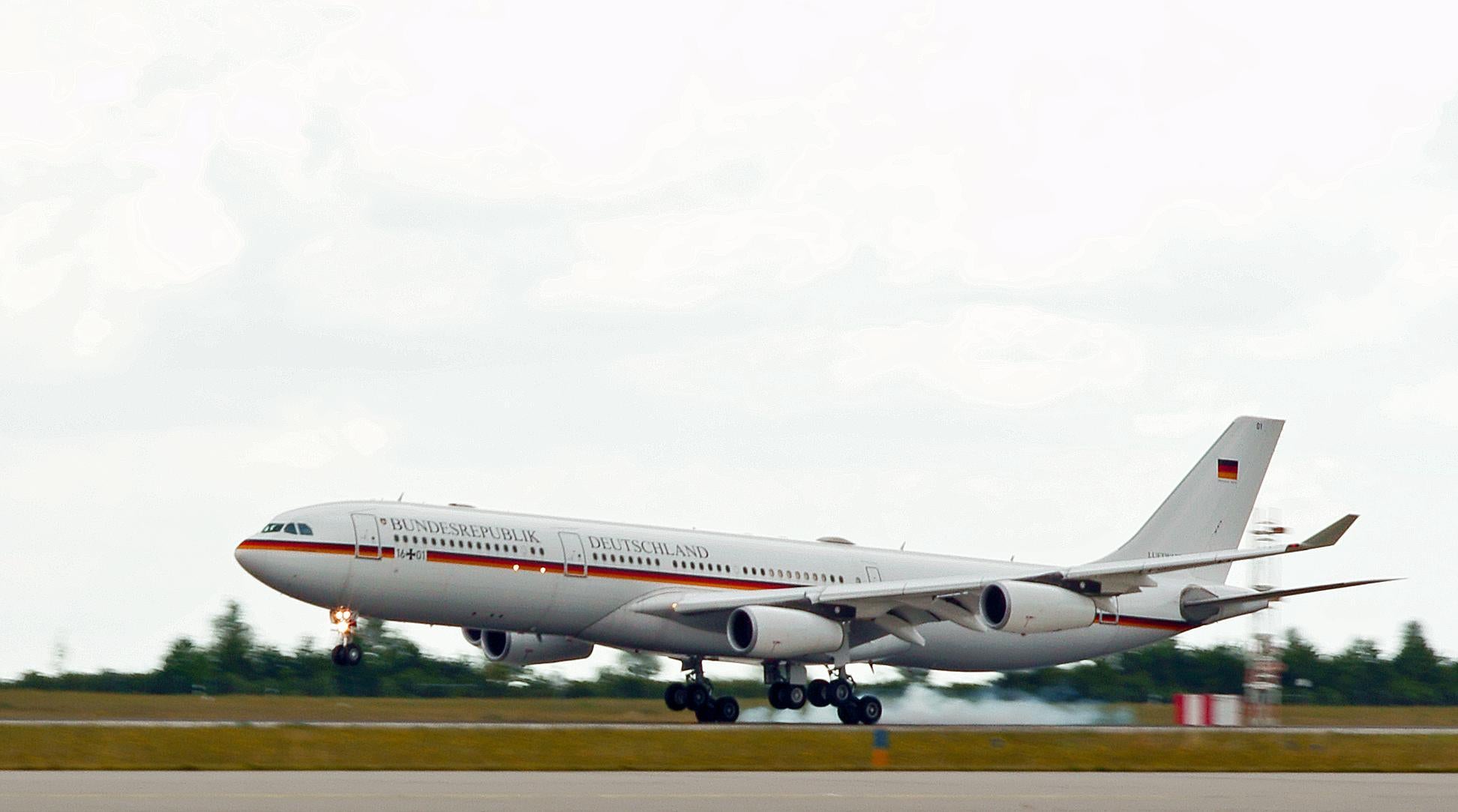 German Chancellor, Angela Merkel, whose Airbus A340-313X VIP is famously known as Konrad Adenauer, is valued at 235 million dollars. Besides this aircraft, she has several other planes at her disposal which are managed by the German armed forces.

Former French President, Francois Hollande also made it into the list, and the flagship aircraft he made use of for official trips Airbus A330-220 is valued at around 210 million dollars. With multiple special features including secure connection channels to share encrypted top secret messages, the former French President’s fleet also has enough designated space to accommodate journalists and members of the delegation.

Queen Elizabeth II is said to have private jets to the value of 100 million dollars at her disposal.  The Queen of England relies upon the 32nd squadron of the UK to roam across the globe. Including two helicopters for traveling to distances of under 1000 km, the fleet also features six BAE 125 airplanes, which can travel to a distance of  up to 3000 km; while, other four mid-sized BAE 146 Airplanes also form the part of the fleet. The queen also has a personal helicopter and Sikorsky S 76 Spirit.

There are several world leaders and top businessmen who either have access to, or own their own fleet for traveling purposes. While some leaders may have more modest tastes than others, for the most part, their air fleets are fitted out with only the best special security features and interior modifications - ensuring  official trips are as comfortable and secure as possible.

Here's How To Manage Your Credit Score

Tips And Tricks To Multifold Sales Through Influencer Marketing