Beware Of The Underdog: Nooruldeen Agha, Founder And CEO, Elabelz

By Tamara Pupic August 7, 2017
Opinions expressed by Entrepreneur contributors are their own.
You're reading Entrepreneur Middle East, an international franchise of Entrepreneur Media.

In October last year, reports came out about a Dubai-based fashion e-commerce venture entering the very nascent Iraqi e-commerce market, having developed a customized solution of delivery and payment for the country’s large, increasingly tech savvy and often deep-pocketed youth population. The online fashion e-commerce platform, described by its founder as “officially the world’s first international e-commerce company that directly caters to the Iraqi market,” had already been operational in Saudi Arabia, Kuwait, Bahrain, Oman and Qatar, in addition to the UAE.

Surprisingly, this news bit wasn’t about some of the region’s leading e-commerce players, who have (arguably) a stronger brand power and substantial resources at their fingertips, but about Elabelz, an online fashion retailer that had, at the time, been established only four months earlier.

Since its launch in May 2016, Elabelz's website and Android and iOS apps have offered over 21,000 fashion products for men, women and children from high profile local and international brands, adding 250 new products every day. Their target audience are young consumers, aged 30 and below. The company has been enjoying a steady 40% growth month on month, beating even its most ambitious expectations and plans. “So far, we have been low key, gathering strength, experience and brain power while enjoying being the underdog,” says Nooruldeen Agha, founder and CEO of Elabelz.

“We needed to build our operations by integrating the best practices from the region and beyond, and we wanted to ensure that we could offer to our pool of customers a service they had always dreamt of having in the region.” As of now though, given all that the Elabelz team have accomplished so far, the startup is now all set on growing its operations. “With a proven track record and amazing growth rate over the past 10 months, we are now ready to scale our operations in multiples of 10 in a very short period of time, putting what we have built to work, and starting to gain a sizeable market share,” Agha reveals. “We are working on finalizing our first major round of funding from venture capitalists. We are talking with multiple regional investors with a plan to close the round within the next six to eight weeks.”

A graduate of the American University of Sharjah, Agha started his career as a software engineer in 2010, climbing up the ranks in the region’s oil and gas companies. However, it was in 2013 that he decided to carve out his own path by co-founding Elephant Nation, a branding and digital advertising agency, with his wife Rand Al Maeeni. Having gathered a team of “creative tech savvy enthusiasts from around the world who are hungry for innovation, new design experiences and intelligence”, the wife-and-husband entrepreneurial duo left their mark on the region’s branding and digital advertising sector, having worked with more than 100 clients, including the Government of Dubai, Emaar Properties, and DP World, to name but a few.

In mid 2015, with Elephant Nation reaching its stabile phase, Agha decided that it was time for his “next big thing’, utilizing the data and knowledge Elephant Nation had enabled him to acquire. On the first day of 2016, he says, it was clear to him that his goal was to enter the region’s e-commerce sector and build “an Amazon for trendy fashion buyers.” “I believe that our region had not been ready for e-commerce until 2015,” he says. “Even today, we are still in the very early days of e-commerce in the MENA region. The total available market is growing every day and doubling every year. It is one of the very few sectors that are actually seeing such growth. I believe that the state of the e-commerce sector is just getting started in 2017, with the Amazon entry into the market, and the Noon venture. The appetite to invest in the sector is now growing, and I believe it will reach a peak in late 2017 till the end of 2018. The reason is that the MENA’s total spend online compared to offline is still very low when compared to the US and Europe.

"We always catch up four or five years later. So, the four years of us catching up with the rest of the world has started in 2017, which simply means that the e-commerce market is only going to grow in the next four years in the MENA, even more than it grew in the past 10 years combined. Furthermore, the fashion e-commerce front still has a lot of room for another big company in the market. The competition in what we offer is still limited to a company or two. Needless to say, the margins in the fashion industry are much higher than electronics which will get us closer to profitability in a shorter period of time compared to other e-commerce businesses.” Elabelz is incorporated in the British Virgin Islands, and has registered offices in the UAE, Saudi Arabia and Iraq. Following a transition period of a few months, Al Maeeni took full charge of Elephant Nation by the end of 2016, enabling Agha to fully focus on the new venture.

Putting his analytical mind and business acumen to good use, especially when facing powerful e-commerce competitors across the region, Agha decided not to squander the opportunity of being at the bottom. In less than a year and without much fanfare, the Elabelz team has grown from 18 to over 170 people, grouped among different departments, including operations, sourcing, technology and development, photography and marketing.

“In the beginning, the biggest challenge was to assemble the right team, to gather the people who believe in the vision of what we want to build, although building the right team requires a continuous effort throughout the life of the company,” Agha says. “We have big a photography team that is shooting 24/7 as our studio is always running. As fast as we shoot the products, they get on the website for our customers. Our sourcing and data entry team is big as well because every single day we add over 250 new styles to the website. That is one of the most important things we offer. Our product range is always updated; every single day you will find new products on our website.”

This rapid growth has, of course, not been without challenges. “Exactly because our growth is so fast-paced and our plans are so big, our other major struggle has been to get employees, investors, and suppliers to believe that we actually can deliver on the promise and the aggressive numbers we have sought out to achieve. Today, we have a proven track record and a concept that has achieved and sustained growth rates at or above the expected benchmarks, during which we have gained great traction. It is only due to us believing in our vision.” 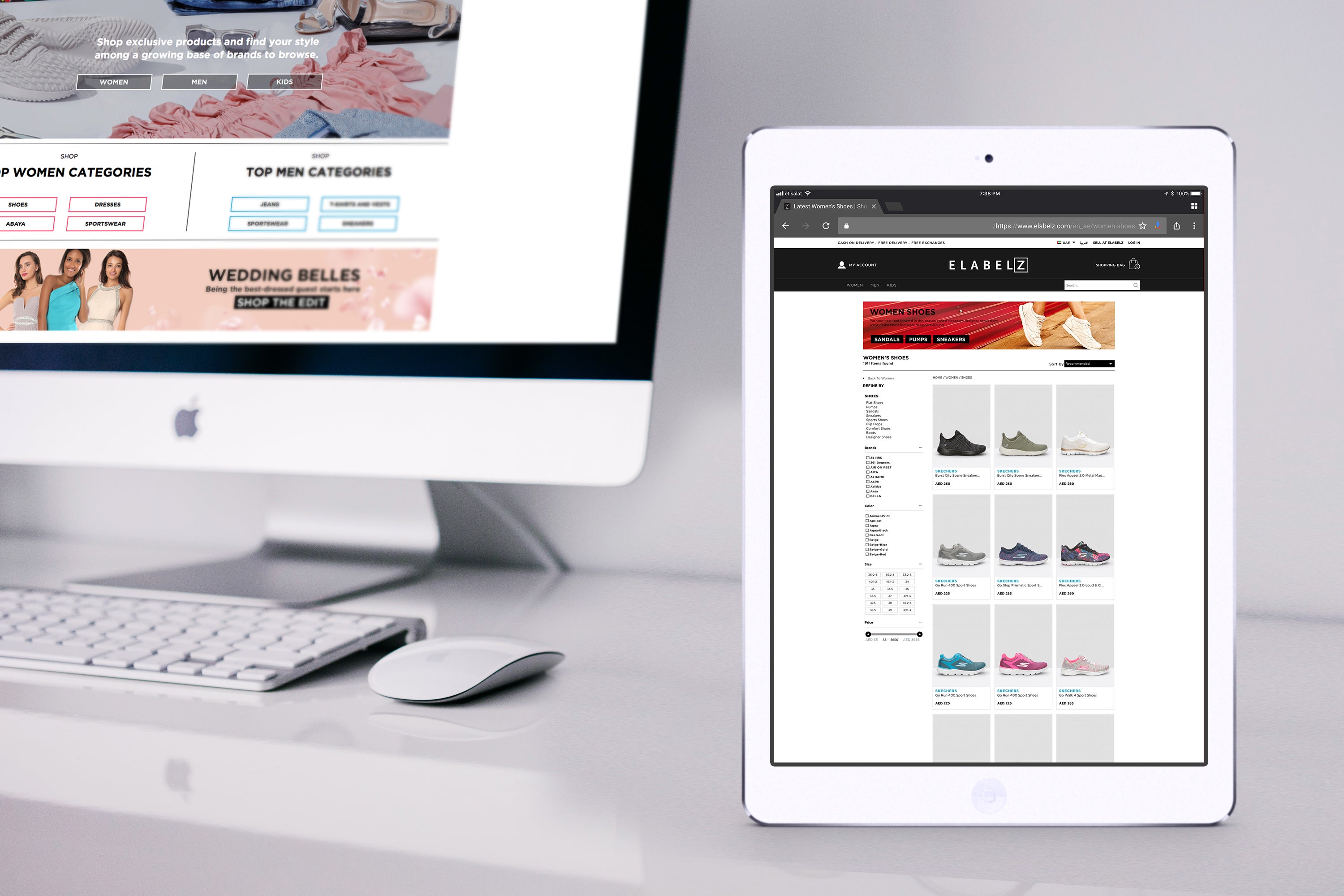 Although hesitant to talk about the company’s financials, Agha reveals that he put his own skin in the game, and later received funding from four angel investors. “When it comes to tech or e-commerce, there is still resistance from investors to understand and believe that this sector is the future,” he explains.

“It is where the world is going and where money should be shifting to, just like that shift happened in the US before. We are getting there, but at a slower pace than we should. Still, I believe our region today is very attractive for entrepreneurs and investors since it is going through its biggest growth ever. In addition, the good thing about starting in Dubai, in particular, is the availability of talent. A lot of eager young minds want to be a part of a vision, want to take part in a success story. People want to build something big and/ or be part of something big, which makes a great environment for startups in the region.”

Not long after the Elabelz team built a solid base in Dubai and a few of the neighboring countries, their eyes were set on Iraq, which was a case study of how quickly and how well they could enter an underdeveloped market, Agha remembers. “We wanted to test and see if we would be able to enter and operate in a market that had hardly seen the concept of buying online before,” he adds. “Our customers in Iraq have one main question, and that is: ‘How do I buy?’ It was something that we had in the UAE in 2009 and 2010 when e-commerce had just started, but no one understood how exactly it should work.

"Also, a very important note here is that Iraq doesn’t have infrastructure that supports the e-commerce sector like we have in the GCC. That meant that we had to build our on-the-ground operation, from consolidating to shipping to collect on delivery (COD) service. We do it all in-house. Being a pioneer in a market as big as Iraq, with 30 million people and with customers who are eager to get the same quality of services offered in the GCC, is one of the most important things we needed to achieve in order to build a brand name that would be associated with fashion all over the region and beyond.”

As Elablez gets set for its next phase of growth, Agha notes that one of the main challenges the company will face will be sustaining the same customer service level that they are providing at the moment. “The key in e-commerce is how good the products are and how fast and seamless can we get them to our customers,” Agha says. “This is one of the main aspirations that we have at Elabelz- to deliver a service to our customers which we have always dreamed of receiving as customers. For that reason, we will continue to be relentless in maintaining and improving the service level delivered to them.” 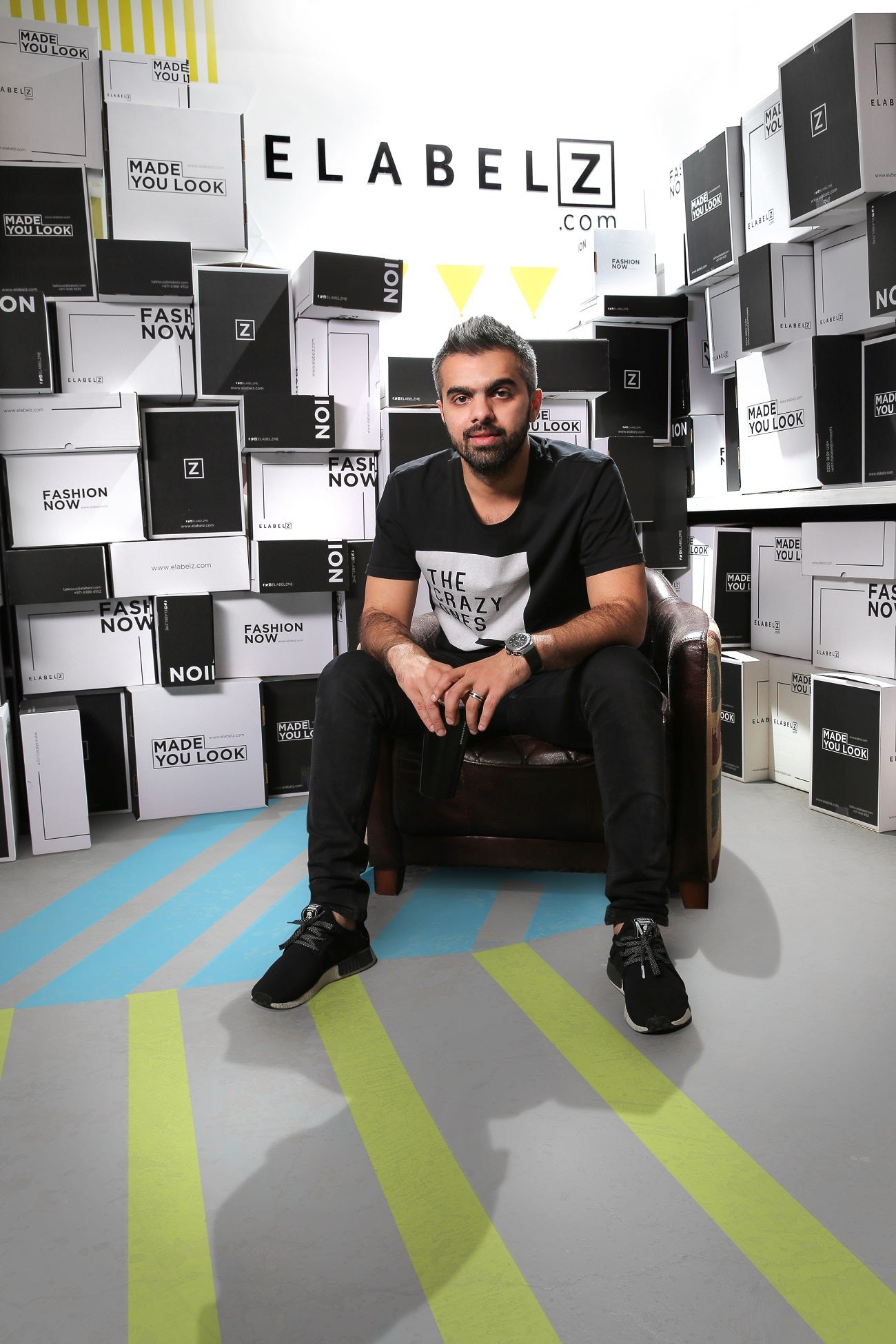 Nooruldeen Agha, founder and CEO of Elabelz
Source: Elabelz
‘TREP TALK
Elabelz CEO Nooruldeen Agha’s tips for entrepreneurs
1. As an entrepreneur, you live by a different set of rules
“From the moment you start up your business, no day will be ‘business as usual.’ In the fast-growing entrepreneurial ecosystem that we have today, you need to be vigilant, fast and on point in every action you take. Clearing out your email inbox is not your main target anymore. Getting the world to move in the direction you want is what you wake up to do every day as an entrepreneur.”
2. Get a great team together
“A company is simply a group of people. Make sure you have the greatest people you can find in order to build with them the greatest company in the world.”
3. Manage your resources (and your time)
“Learn the art of delegation. You can never do everything right, and your opinion will not always be right. As an entrepreneur, you will always be changing your mind, so let your team be creative and give them the freedom to make mistakes and learn from them. Your job is to guide this creativity to serve the bigger vision which you and your team share.”
4. Set clear goals for your business
“Be clear on how you will make money and how you can be profitable. Don’t start a company thinking, ‘I want to do what I love.’ Sometimes what you love cannot generate scalable revenue. That is called having a hobby, which costs money, and doesn’t make you an entrepreneur.”

Related: It's Official: Amazon Confirms Acquisition Of Souq.com; Deal Will Include PayFort