It has been reported for years that Amazon employees are all about the dogs, but until recently, it wasn't known how crazy they are about our four-legged friends.

More companies -- big and small -- are allowing employees to bring their pups to the office, but despite the uptick, Amazon still takes the cake when it comes to a dog-friendly workplace. It has been reported for years that Amazon employees are all about the dogs, but until recently, it wasn’t known how crazy they are about our four-legged friends.

In a recent post on the Amazon blog, it was revealed there are 6,000 dogs “working” at Amazon’s Seattle campus. No, they’re not fetching and retrieving your products, but they are doing their part to keep every human wagging their metaphoric tails. 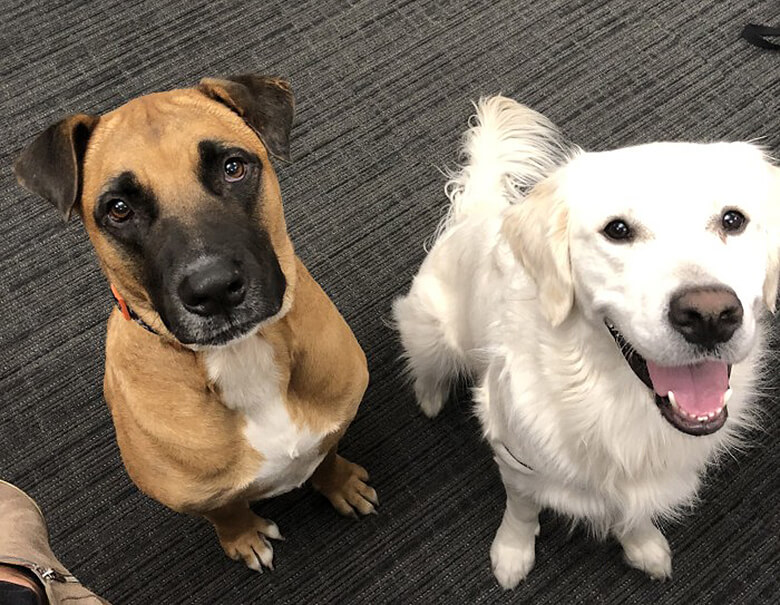 "At Amazon, bring-your-dog-to-work day is every day -- a long-standing tradition that both Amazonians and their four-legged friends enjoy" the post states. 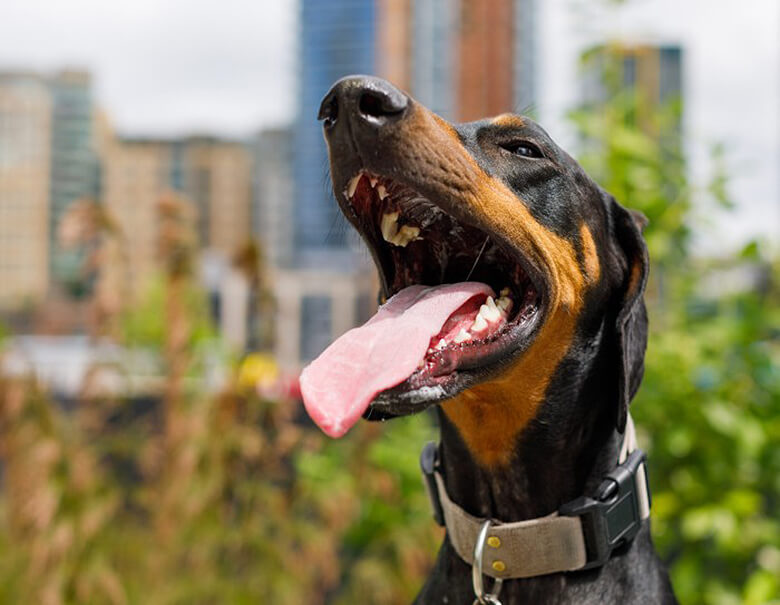 And for these lucky dogs, they get all the bells and whistles of being part of the Amazon team. They have a “doggie deck” with a fake fire hydrant where dogs can run around and burn off energy. They also have “Dogs Only” water fountains, a 1,000-square-foot dog park with rocks and other structures to climb on, poop bag stations, designated dog relief areas, receptionists armed with dog treats, a doggie treat truck called The Seattle Barkery, dog events  and Lara Hirschfield, the company’s “Woof Pack” manager. 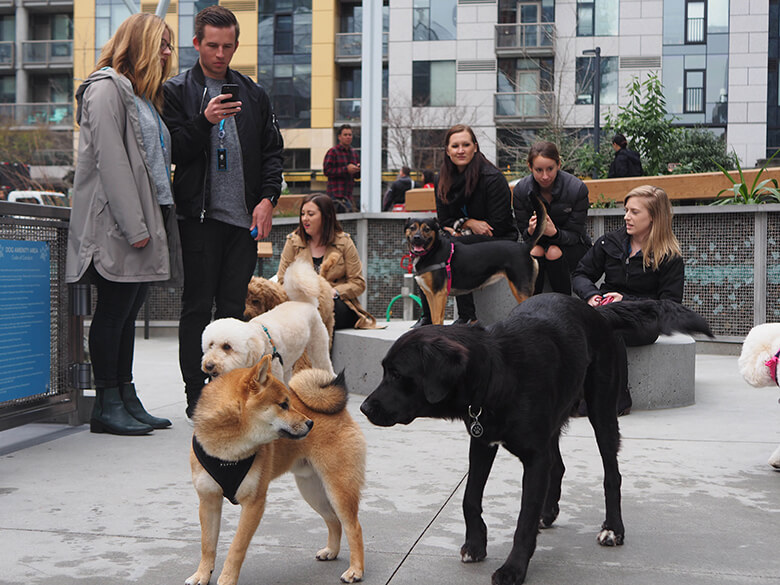 Dogs can thank a pup named Rufus for their royal treatment. In the early days, Rufus, a Welsh corgi, belonged to Amazon's former editor-in-chief and principal engineer. Known companywide as “Amazon's shortest volunteer worker,” Rufus came to work every day, ready to attend meetings, take an afternoon nap and strut his stuff during a game of hallway tennis ball fetch. As it goes, employees would even use Rufus’ paw to click a computer mouse when launching early pages on Amazon. Lovable, cheerful and the originator of dog culture at Amazon, Rufus crossed the Rainbow Bridge on May 27, 2009. There’s a building on the Amazon campus named after him.

Related: How to Make ‘Take Your Dog to Work Day’ a Success for Everyone

Some of the office dogs, known as the Dogs of Amazon, have their own profiles on the Amazon website, which includes their breed, favorite toy, special loves and age. There’s Peek, a long-haired Chihuahua and terrier mix (favorite toy: human emotions; loves: to stand on her hind legs to get your attention; sge: 5 years), Phoebe, a Husky and Lab mix (favorite toy: Kitty Ninja; loves: anything involving birds and squirrels; age: 1 year) and Biscuit, a French bulldog (favorite toy: stuffed squirrel; loves: snoring like crazy; age: 4 years) and more. 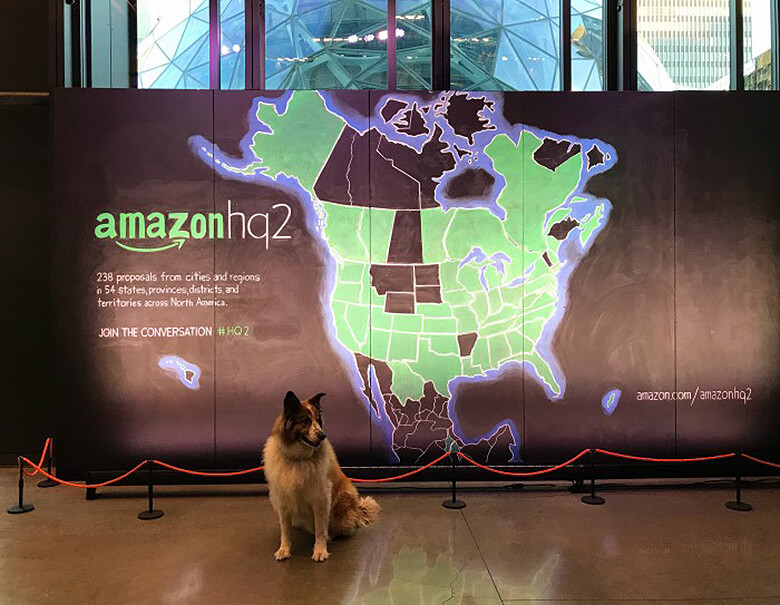 Being so into dogs, not only makes the owner’s happy (who wouldn’t want to bring their pup to work?), but also provides extra benefits in the workplace. Pets at work can reduce stress, increase productivity, improve morale, expedite social interaction, improve job satisfaction and provide companionship. Dogs offer a fun, relaxing diversion when the pressure is on, which improves concentration on the job afterwards.

Related: Brain Break: I Took My Dog to Our Newsroom. Here's How My Day Went. 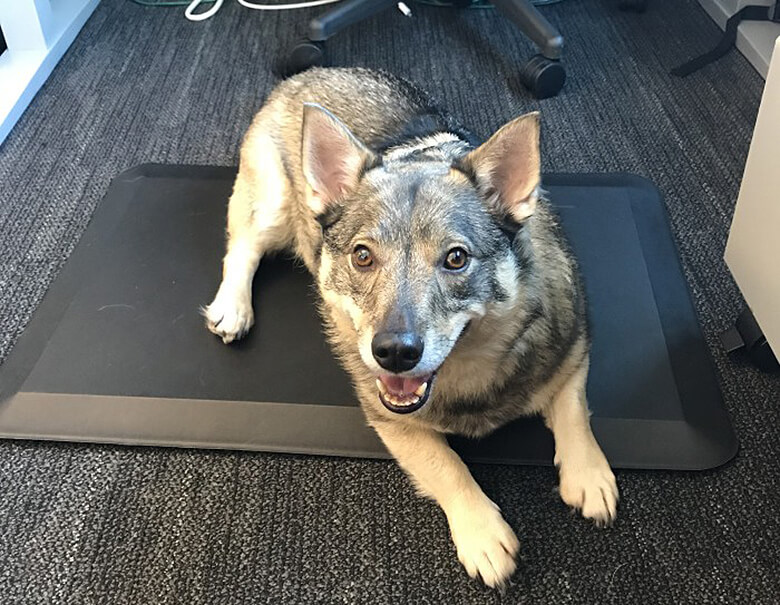 “The dog-friendly policy also contributes to the company’s culture of collaboration." Hirschfield said in the blog post. “Dogs in the workplace is an unexpected mechanism for connection. I see Amazonians meeting each other in our lobbies or elevators every day because of their dogs.”

There are no breed or size restrictions. Hirschfield has a chocolate labradoodle named Charlie Bear who occasionally interns with her husband, also an Amazon employee. According to LinkedIn, the three most popular breeds at Amazon are golden retrievers, Labrador retrievers and labradoodles. 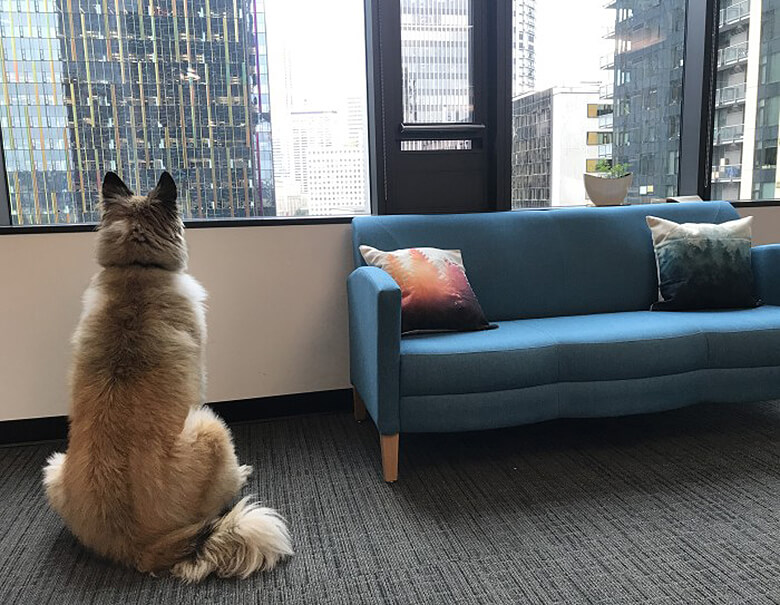 Dogs at Amazon must be registered and approved before they allowed to join the ranks. Employees have to get the go-ahead from their manager and teammates, and then fill out a registration form. Proof of vaccination must be provided. And then there’s the “dog rules”: dogs must be housebroken, well behaved, socialized and healthy.

Related: Amazon Opens Up Dog Park for Its 2,000 Office Pups