Should You Upgrade to the New Apple iPad?

Apple's new iPad is less formal than the iPad Pro and more affordable. Let's see if it's a big enough step up from the previous iPad to be worth your hard-earned cash.
Next Article Add to Queue


At first glance, Apple's new iPad is an iterative upgrade from last year's model. It features improved specs at the same $329 price tag that makes it compelling for home use; the iPad Pro line remains for more professional applications, in the vein of the Microsoft Surface tablets and notebooks.

If you already have a 2017 iPad or an iPad Air 2, it might be hard to tell if you should consider upgrading to the new iPad. Let's dive in.

A focus on education

One glance at the product page for the new iPad tells you everything about where Apple envisions this tablet: in the classroom, not the office.

Apple shows the tablet in a number of educational use cases, like taking notes and making presentations. It's decidely a tablet intended for students and for casual home use, from putting together reports in Pages to playing with GarageBand.

Apple's marketing materials for the new iPad are also wildly different from how the company sells the pricier iPad Pro ($799.00 at Apple Store). To highlight that appeal, Apple is offering the new iPad for $299 to schools, $30 less than the retail price for home users. It's also boosting the free iCloud storage offered to Apple IDs associated with schools from 5GB to 200GB. 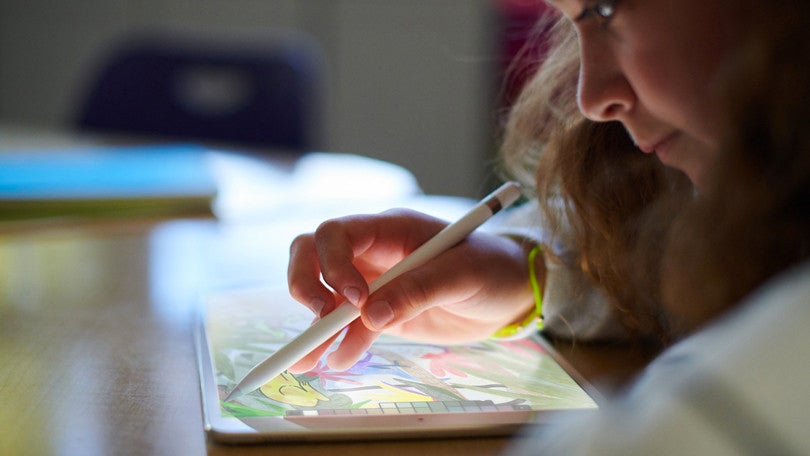 We chose the Apple Pencil as an Editors' Choice for tablet stylii because of its reliability and accuracy; being able to use it on the much less expensive standard iPad is a boon to any aspiring artist. You still need to buy it separately for $99 ($89 for schools), but you'll still be spending more than $300 less than if you bought an iPad Pro solely for the Apple Pencil.

The new iPad uses Apple's A10 Fusion chip, which puts it on the same generation of Apple chips as the iPhone 7. The A10 Fusion isn't as powerful as the A10X used by the iPad Pro, but it's a solid jump in performance from previous processors. 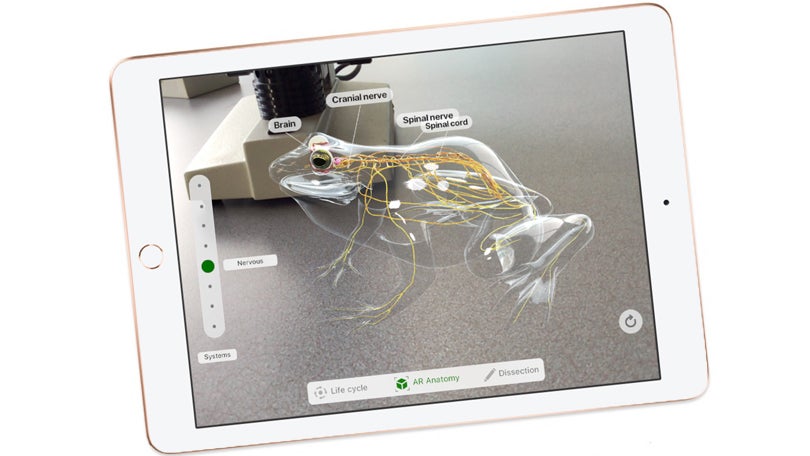 Apple claims the A10 Fusion has a CPU that's twice as fast and a GPU that's 2.7 times as fast as the A8 chip in the iPad mini 4. That doesn't tell us how much faster it is than the A9 used by the previous iPad, though, or even the A8X chip used by the iPad Air 2, so we'll have to reserve judgment until we get the new iPad in the lab for testing. For comparison, Apple says the A10X chip in the iPad Pro has a CPU that's 2.5 times faster and a GPU that's a whopping 4.7 times faster than the A8.

You can still use AR apps on the new iPad, like you can with nearly any modern mobile device with a camera, but without stereoscopic imaging or additional sensors for tracking depth, it isn't a very future-proof device for AR. We have similar qualms with the iPhone 8 and its singular rear- and front-facing cameras.

Not many other changes

Everything else about the new iPad is virtually indistinguishable from the 2017 iPad. It still has the same 9.7-inch, 2,048-by-1,536 Retina display, cameras, touch sensor, wireless radios and even the exact same measurements as the previous model. Besides the A10 Fusion processor and Apple Pencil support, the new iPad is identical to the last iPad.

Apple Pencil support is probably the biggest selling point for this new model. If you're a graphic designer or an art student who doesn't want to buy an iPad Pro just to use the Apple Pencil, the new iPad's support for it is a good reason to consider upgrading. Otherwise, wait for our full review of the new iPad to see if its faster processor and tweaks are worth it.

Italy is Launching an Antitrust Investigation Into Amazon and Apple

Need to Run Windows on Your Mac? This Discounted Software Bundle Does That and More.

5 Accessories Under $40 That Make Your MacBook Even More Functional