The new film 'Netizens' details the threats to life and livelihood women endure and what they're doing about it.

Untold numbers of women endure horrific threats and abuse online. The new film Netizens, which premiered at the Tribeca Film Festival this past weekend, not only illustrates the problem but criticizes how little legislators and major social media platforms, including Twitter, Snapchat and Facebook, are doing about it.

"I hunger for you, Anita. It consumes me every day," an abuser identified as "Kevin Langham" wrote in a 2014 tweet depicted in the film. "I want to hold you in my arms. I'm going to choke the life out of you."

That "Anita" is Anita Sarkeesian, the cultural critic who has often taken on Gamergate and others in the misogynist world of online gaming. In return for her stance, Sarkeesian has suffered frightening tweets like the one above, and others too crude to quote. In the film Sarkeesian showed a photo of a jar of semen sent online. when she speaks publicly, the film pointed out, the venue is typically protected by armed guards and swept by bomb-sniffing dogs.

In a panel discussion following a Saturday screening of the film in New York, Sarkeesian -- a San Francisco entrepreneur who with her team of four creates the video series Feminist Frequency -- addressed possible responses to the online abuse women face from gamers, ex-boyfriends and other venomous sources.

"My concerns are that these platforms were built from the ground up by white men and tested on their families and people in their orbit who looked like them, and they never thought about how their platforms could do harm," Sarkeesian said. "So, what happens is that when [a platform] takes off and you have millions of users, it's putting Band-Aids on this geyser of harm and chaos on their platforms. ... Can you ever fix a platform where the foundation is fundamentally flawed?" 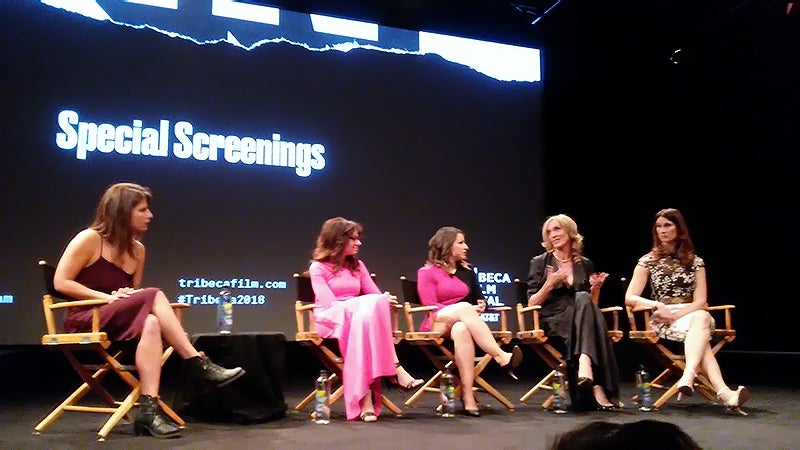 Sometimes yes, the critic herself acknowledged. She consults with major tech companies, including those in social media, Sarkeesian said. And, "It's fascinating to be in a space as long as I have, doing this work and [seeing] how rapidly we have come to recognize that online harassment is real.

"Five or six years ago, when I met with Twitter, there were five or six people on their safety team; and they were like, 'Nah, we don't have an [issue].' And, I'm like, 'What?' Now, there's a safety council and they try to communicate with us about what we're doing, I don't know the specifics of whether it's working or not but that's such a huge difference."

Certainly that difference doesn't work for everyone, the film pointed out in its profile of two other women.

One was Tina Reine, a Miami-based carbon commodities trader and aerialist who once delivered a TEDx talk about dancing as a springboard to girls' self-confidence. Reine's personal history became the obsession of a hateful ex, whose extensive online defamation of her caused a potential and at least one actual employer to dismiss her.

In one of the film's most telling scenes, Reine, who during the filming was eking out a living teaching gymnastics to children, signs up for a Toastmasters course. There, she explains to a skeptical fellow student, who is male, that what she had been encountered wasn't just a free speech do-or-die situation: It had wrecked her life emotionally and financially, she told him.

"Every time I give out my name," Reine said elsewhere in the film about her ongoing struggle, "I know I'm about to be judged because I know eventually they're going to Google me and see what's there, and they're going to judge me."

Also profiled in Netizens was New York-based attorney Carrie Goldberg. Goldberg became a lawyer specializing in online abuse, she recounted in the film, because she too had suffered online defamation and couldn't find counsel who knew enough about social media to help her fight back.

In one of the film's most emotional scenes, Goldberg is shown opening boxes at a storage facility that have been labeled "tainted," because the clothing and jewelry they contain are items she wore during the abuse she suffered from a man she dated for just four months.

She'd put her possessions in storage, she said in the film, because she'd had to move to a more secure apartment -- that was how scary the threats from her ex were.

The Brooklyn-based attorney was in the news two years ago for filing complaints against New York City schools for actions taken against female students who'd alleged sexual attacks by male students. In one case Netizens describes, a Brooklyn girl's assault was actually recorded and posted online. The girl became the target of taunts; the principal responded by telling her to stay home because her presence "would make things worse."

Related: Reddit to Crack Down on Abuse After CEO Is Targeted

The internet, the film's website declares, is becoming "the next frontier of civil rights." And the film's speakers underscore that view.

"How do we get the platforms to recognize that this is a problem that is actively harming their users? What do these platforms stand for?" Sarkeesian asked rhetorically during the panel. "Do they want Nazis on their platform?

"I'm tried of giving them this free [free speech] waiver over what is happening ... The platforms are not built with human users in mind."