Edgardo Santiago and Luisaliz Rivera learned that 'community' is everything, along with communications and preparation.

By Edgardo Beniquez Santiago and Luisaliz Rivera June 21, 2018
Opinions expressed by Entrepreneur contributors are their own.

When Hurricane Maria plowed through Puerto Rico last September 20, she left a path of unprecedented destruction. Homes and businesses were destroyed, communities were flooded, power lines and bridges collapsed and agonized families went for days without knowing about the health and well-being of family and friends.

Related: Staying on Course Despite the Ravages of Hurricane Maria

As for those who survived, once the storm passed, Puerto Rico was left in a state of disaster: The hurricane knocked out most of the island’s power grid leaving approximately 3.7 million residents in the dark; CNN reported it as the second-largest blackout in history.

My business and life partner, Luisaliz Rivera, and I went through this experience firsthand. Our homes were flooded and our families fought for survival. And the timing, professionally, speaking, couldn't have been worse: Maria hit just as we were working to open a new business -- our first as entrepreneurs together. 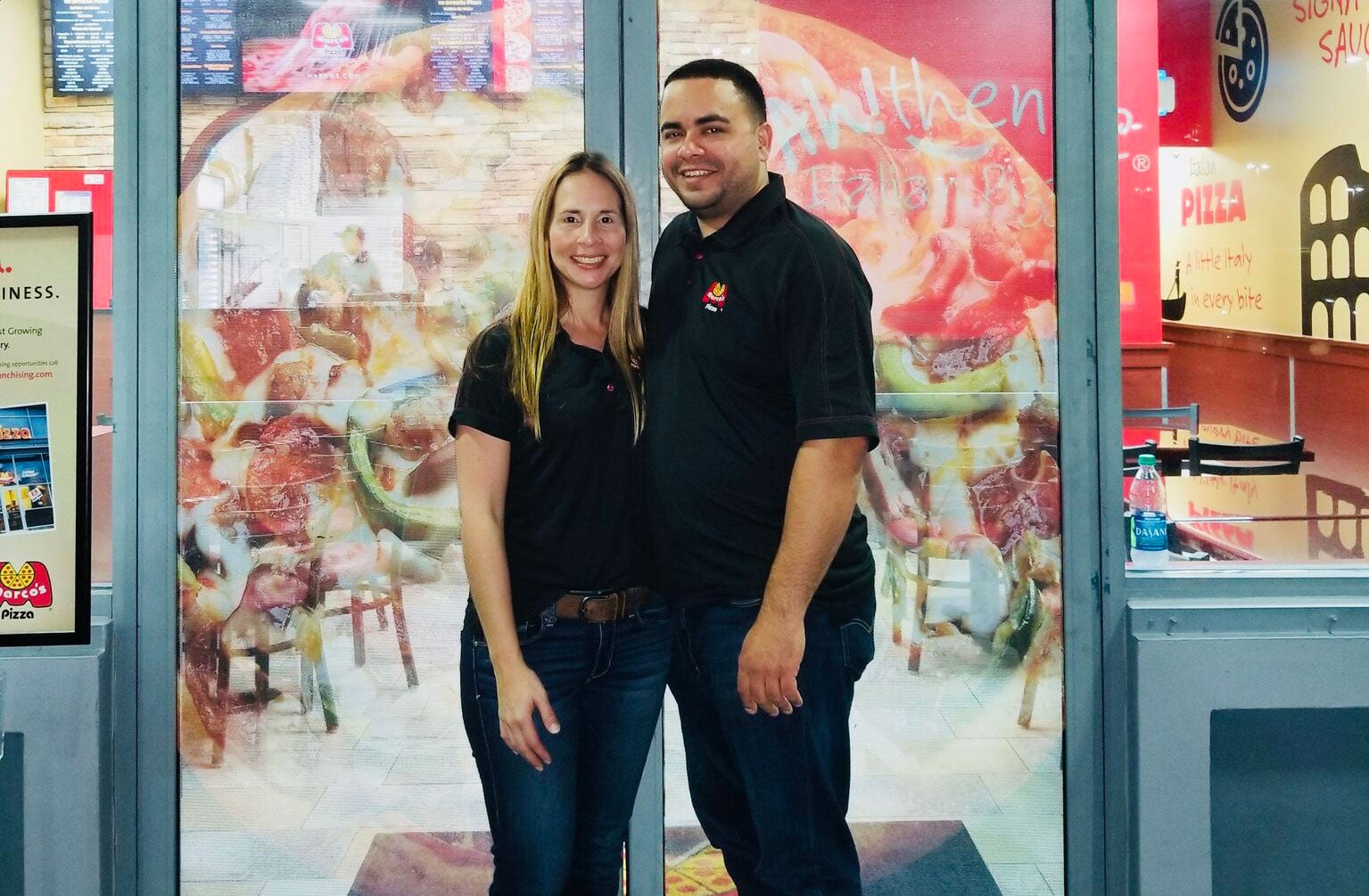 We were franchisees opening Marco's Pizza's 900th restaurant, in what was to be a hallmark for our company; our location was -- and is -- Bayamόn, Puerto Rico. I say "is," because while our town took a direct hit from the storm, we're happy to report that we're still here. However, surviving and rebuilding after Maria was a struggle -- one from which we can share lessons learned with other entrepreneurs, particularly those in the hospitality industry, unfortunate enough to suffer through their own natural disaster.

Days before Maria hit the Caribbean, we flew to Ohio, where Marco's leading pizza franchise is headquartered, for our final training session prior to opening. While there, we anxiously watched reports about the approaching storm. We knew the training was key to our business success. But we also knew that being so far from home was a risk.

And what a risk: Once the hurricane passed, we were stuck without any information, unable to contact friends and family.

We immediately flew to Florida in search of the best opportunity to return home; but flights were scarce, leaving us to climb aboard a cargo plane. Upon our arrival, Luisaliz was unable to reach her parents in Utuado -- at the center of the island. Then came a stroke of luck: Scanning social media, we spotted a Facebook photo of her parents' home with “HELP” written in the grass.

That told us that her parents were alive -- though in need of rescue. We took a helicopter to the area where they were trapped and brought them to safety.

Shoring up our new business

Once we ensured the well-being of family members, we could turn our focus to our business and supporting the six other Marco’s Pizza locations on the island.

Related: How Entrepreneurship Is Helping to Save Puerto Rico

One location was completely destroyed, its exterior and interior demolished beyond repair; but the others recovered. The biggest challenge for all of us franchisees was finding fuel for our generators and setting up a system to receive merchandise. In Bayamón, we had neither electricity nor water. Rubbish covered the streets. And key deliveries were suspended.

We ended up getting water and electricity service back prior to our April 6 opening, but not having had service for those months after the storm drastically delayed our progress. Government agencies where we would normally obtain the required permits were closed or lacked the internet, Trying to get materials to complete construction proved nearly impossible.

And consistently long lines at the gas stations -- with waits up to eight hours --to get gas for our generators and cars made that post-storm period extremely challenging.

Despite the catastrophe, and the huge impact to our personal lives, we prevailed and worked with Marco’s national team to open our store in reasonable time after the September storm. All along, we strived to maintain a "can-do" attitude and resiliency.

And those lessons learned along the way? There were five:

The hurricane severely impacted our build-out and operations. While we faced big hurdles, the true test was how determined we were to hang in there. The solution that worked, we found, was to constantly think through every obstacle we encountered.

The lesson learned: Analyze your setbacks, make adjustments to your strategy, and prepare for your next challenge to put your team in the best position to prevail.

2. Prepare your communications system in advance of a disaster.

We learned a great deal from the efforts of our fellow Puerto Rico franchise owners. After Hurricane Irma skirted the island prior to Maria, leaving a million without power, those experienced owners knew that preparing a communications system was the only way to keep their restaurants operating.

For that reason, they prepared communication mechanisms that could be alternatives to cell phones -- such as social media networks -- and created special accounts for the restaurants' managers and franchises.

Channels like Facebook and WhatsApp were key. They were used to fight through each day and properly communicate what was happening in the restaurants in order to coordinate the distribution of food. Once those adjustments had been made and a plan was in place, it was important to stay on top of communication.

The lesson learned: Let your employees, clients, and customers know what is happening. Provide notifications regarding ordering, shipping and inventory. Share details of expected opening or re-opening dates. Also consider leveraging social media to provide community updates, well wishes and support/resources you know of or can provide to aid in the recovery. Be as detailed as possible in your communications. This will show your ability to properly deal with problems and develop solutions, even as you gain trust from your company and fellow businesspeople.

When you're faced with adversity, the relationship you build with your community becomes fundamental to survival. Community members look to one other for support, and there is a huge opportunity to play an active role. We teamed up with businesses and restaurants to create a safe haven for families, to provide food, shelter and phones so people could contact loved ones. In some cases, we also provided electrical connections in Marco’s Pizza locations people could use to charge their cell phones and other devices.

The lesson learned: Sometimes it's necessary to put “business” on the back burner and focus on strengthening your relationship with the community -- the foundation that holds everything together.

4. Realize that you’re nothing without your team.

Your team is the strong support system behind you that is going to make the difference. So, your team should be your priority. Equipment, documents and overall infrastructure can be replaced, but your people can't be.

When we returned to open our store, we made sure our employees were part of the process. Many were dealing with their own personal situations, but all were committed to the business and contributed in an immense way. They would come into our location to help keep it on track for its slated opening -- ensuring that the equipment, design and functionality of the store were ready for opening day.

Team members also played a key role in the grand opening celebration -- a full day of set-up, cooking and welcoming the community and key players from the Marco’s Pizza home office.

Additionally, we had the support of the other Marco’s Pizza locations and the executive team the whole way. As a group, we had brainstormed and gotten creative with equipment to stick to our grand opening time line. Example? We personally engineered a hood/kitchen component to keep things on track due to the fact that one hadn't been delivered.

The lesson learned: Recognize how valuable other people are to your success.

Having overcome adversity, we now know that now is the perfect time to prepare for the next disaster that may impact your business (actually, businesses; we intend to open two more Marco's locations).

You should do the same. Outline how your business will respond to tragedy: Consider operations, build-out, processes, vendor partners, employees, etc. Update your current plan now while the topic is top of mind so you will be prepared next time misfortune strikes.

Puerto Rico’s small and midsize businesses represent 90 percent of private companies on the island and about one third of the workforce, as reported by Bloomberg -- and the economic impact of the storm has been devastating.

Of the nearly 45,000 businesses in Puerto Rico, an estimated 5,000 to 7,000 remain closed, the Wall Street Journal reported in March. But now, more than nine months after the storm, we’re seeing extensive rebuilding. Maria's aftermath has been a true story of resiliency, collaboration and community engagement, as entrepreneurs across the island fight to come back.

Luisaliz and I celebrated our own big win on April 6, with that grand opening celebration. It was more than just a normal grand opening because of what we'd all gone through: In fact, our support team and community partnership came together as we opened our doors to the public.

Related: Hurricanes Irma & Harvey: Leading Your Business In the Aftermath Of Disaster

And the overall lesson we gleaned? No one is immune from natural disasters, but the lessons learned along the way generate momentum for long-term operational success.

Edgardo Beniquez and Luisaliz Rivera are the owners of the 900th location of Marco’s Pizza; their store is in Bayamόn, Puerto Rico. Prior to opening the pizza restaurant, Beniquez worked as a mechanical engineer at GCSS Corporation in Puerto Rico, a construction and equipment fabrication company serving companies in the pharmaceutical industry. He actually built his Marco's Pizza store and fabricated some of the auxiliary equipment in the kitchen. Beniquez' business and life partner, Rivera, previously worked for a pharmaceutical company in its quality-control department.

How to Keep Your Business Running During a Natural Disaster

What Entrepreneurs Can Do to Overcome the Impact of Natural Disasters

I Lost Almost Everything in a Natural Disaster. Here Is How I Recovered.