China Is Slamming the U.S. With $34 Billion in Tariffs -- Here Are the States That Will Be Hurt the Most

The tariffs cover mostly energy and agricultural products but hit everything from goldfish to electric cars.

The collateral damage from President Donald Trump's trade fight with China could soon have some states feeling the squeeze.

China announced tariffs on $50 billion worth of imports from the US in response to Trump's tariffs on Chinese imports, an escalation of the brewing trade war between the two countries.

Also mirroring Trump's move, China's tariffs will be deployed in two waves — the first covering $34 billion worth of goods coming in early July.

The Chinese tariffs are focused on energy and agricultural products, covering goods including ornamental fish, whiskey, and coal. By singling out certain goods, the Chinese are also hitting some states harder than others.

To break down the effect by state, Business Insider used US Commerce Department data to determine the amount of tariff-eligible goods from each state sent to China in 2017. (Due to the US database's limitations, the totals include some foreign-sourced goods that may not be subject to China's tariffs. Those goods represent a small portion of the overall values.)

There are nine states that exported more than $1 billion worth of tariff-eligible goods to China in 2017: 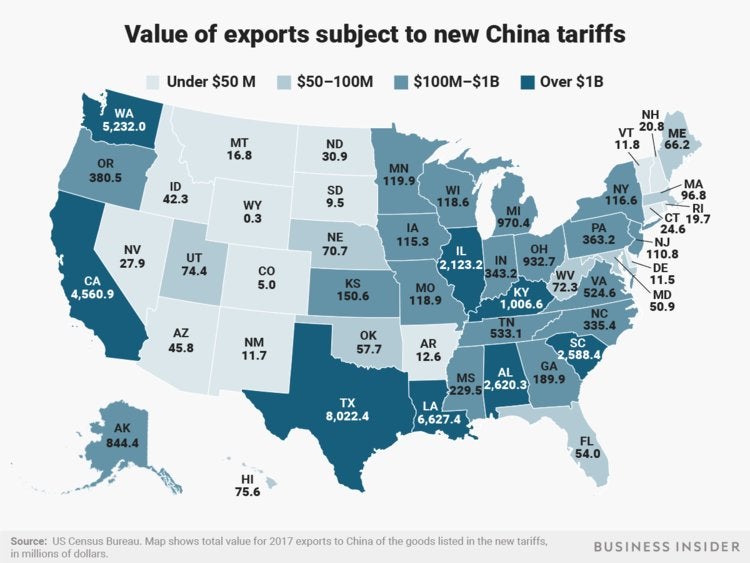