By Tamara Pupic November 26, 2018
Opinions expressed by Entrepreneur contributors are their own.
You're reading Entrepreneur Middle East, an international franchise of Entrepreneur Media.

"The most important thing is to guard yourself from anything negative, because that really can derail you," says the soft-spoken Dr Hayat Sindi, known as one of the world's leading biotechnologists and a Senior Advisor to the President of Science, Technology and Innovation at the Islamic Development Bank in Saudi Arabia, on the sidelines of the fourth LinkedIn MENA Talent Awards held in October in Dubai.

Dr. Sindi could never appear at a loss for words about science and the importance of putting innovation in the service of solving the world's problems, but her career speaks volumes about the science of personal achievement. Among many other things, it includes her being one of the first 30 women to be appointed to the Shura Council, Saudi Arabia's highest consultative body, in 2013, or serving as a Goodwill Ambassador for Science at UNESCO, or being appointed by the UN Secretary Ban Kimoon to a ten-member group to support the technological facilitation mechanism (TFM) for the UN Sustainable Development Goals.

At this point, our mind may be quick to assume that Dr. Sindi has reached a point in her career where she encounters only minor obstacles, if any, to her work and how she does it. However, she assures me, it hardly gets any easier. "Challenges never change, but only move up to a new level," Dr. Sindi says. "They remain similar to how it is when you introduce a new drug, people will not want it to succeed, they will try to pull you down, but you will be more experienced at dealing with them. And the more successful you are, the challenges just get bigger and tougher, but the reward is different. For example, passing an English test to study science in England was once a challenge for me, whereas now my challenges are about getting funds for my scientific initiatives, or for mentoring young entrepreneurs. So, there are always obstacles, but the impact of my overcoming them is completely different. Back then, it was only me and my books. Now, it's me and different organizations trying to come together to achieve something much bigger."

Originally from Makkah, Saudi Arabia, Dr. Sindi is the first woman from the Gulf to earn a PhD in biotechnology, studying at King's College London, the University of Cambridge, the Massachusetts Institute of Technology, and Harvard University. As a woman, a young scientist, and later on an entrepreneur, she was resolute to get the best out of all three cultures, which have had a lasting impact on her personal development.

"Having been raised in Saudi Arabia, I was fortunate to get this strong foundation of self-belief," she says. "My culture, my family, and my faith have all contributed to that foundation. I had a father who could teach me anything I wanted. When I moved to England, it was also a great platform for me to discover who I was as a scientist. In Britain, they are really good at how they shape your skills and talents, because they throw challenges at you and ask you to go and figure it out. In the beginning, it was tough, but when you adapt a little bit, you realize that it is amazing how a human can adapt to difficult situations and excel. When I went to the US, I experienced another type of culture in terms of the concept "why not,' meaning that you can try anything and not fear failure."

In 2007, Dr. Sindi founded and became the Director of Diagnostic for All, a non-profit initiative that creates low-cost diagnostic devices designed for the developing world. In 2011, she founded and chaired the Jeddah-based Institute for Imagination and Ingenuity (i2institute) through which she aims to promote science education and innovation to young people. To successfully pursue these entrepreneurial endeavors and make a lasting social impact, having selfconfidence and a clear goal in life is crucial, she says.

"In different environments, people can judge you by the way you look or talk, by the color of your skin, and so on, and you can't please everyone," she adds. "Therefore, I always treat my mind as a garden, and focus on the beautiful flowers in it, discarding all the negatives, because people and their opinions can get to you very easily. Sometimes, I do feel tired and exhausted, but I never reach a dead end, because I feel that if there is a will, there is a way. And you need to surround yourself with people who, even if they haven't excelled in their own education or career, really believe in you, no matter what. It's because you need that unconditional trust and love. And once you have a mission in life that is a light to carry you forward, you won't even notice the obstacles and the challenges anymore."

When it comes to women in science, statistics certainly don't paint a positive pictureaccording to the UNESCO Institute of Statistics, less than 30% of the world's researchers are women, despite the male-to-female ratio among PhD students and younger post-doctoral graduates being roughly 50:50.

The beginning of Dr. Sindi's interests and career in science was not much different, and she is now resolute to empower more women across the Arab world to follow in her footsteps. "It is really important for women to have role models," she says. "I used to ask my father whether scientists were true human beings, because I could not see any women among them. And the key thing for anyone in the world, something that if you don't have, even if you have the highest PhD, if you don't have self-confidence, no one will trust you. Women really need to believe that they are amazing, talented, articulate, beautiful, and they really should believe that they can do anything. In science, they are better engineers than men, because they don't give up, they seek solutions, and they always persist." Dr. Sindi adds, "Another important thing is that sometimes we put heroes of the past on such a great height, as if no one is allowed to challenge Sir Isaac Newton or Albert Einstein. And why not?" 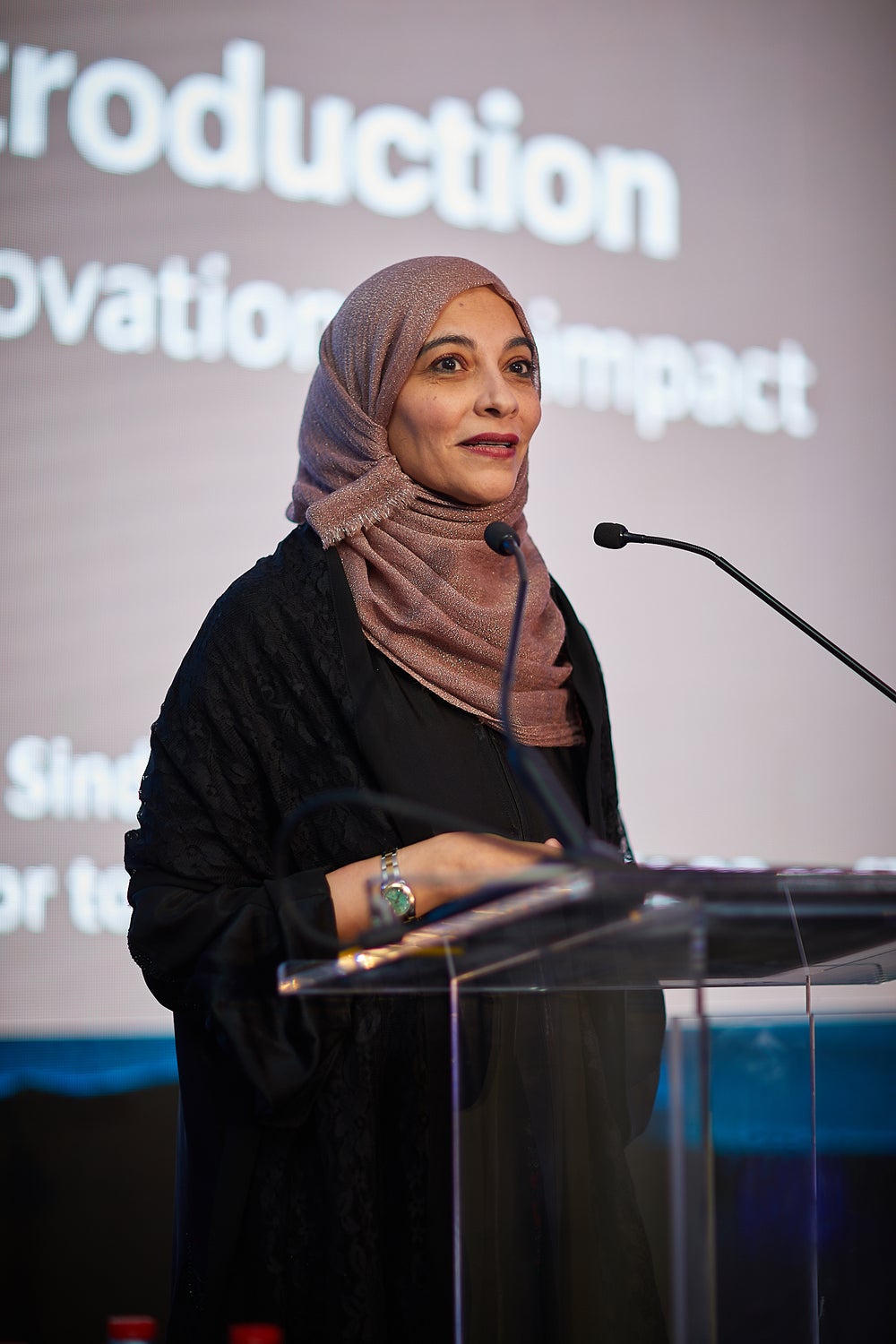 Dr Hayat Sindi, known as one of the world's leading bio-technologists and a Senior Advisor to the President of Science, Technology and Innovation at the Islamic Development Bank in Saudi Arabia. Source: Dr. Hayat Sindi.

"If you look at statistics, we miss women in leadership positions in science to decide on the direction of science, where we should invest money and on what type of innovation," she says. "Because I believe that if we have women in decision-making positions, we won't have fast cars and nuclear weapons as much as more cures, medicines, more humanitarian goals achieved, and so on."

And as a true scientist, she has facts to prove her statements. "Who designed the bullet? A man [Henri-Gustave Delvigne, inventor of the cylindrical bullet]. Who designed a bullet shield? A woman [Stephanie Louise Kwolek, inventor of Kevlar]," concludes Dr. Sindi.

Related: Focused On The Future: Udacity COO Clarissa Shen On How Her Platform Aims To Fill The Global Tech Skills Gap