According to the 5th edition of PwC-FICCI India Manufacturing Barometer, the economic growth is to be driven by strong domestic demand and an increased focus on export markets

Indian manufacturers are optimistic about the growth rate of the nation’s economy in the next 12 months. According to the 5th edition of India Manufacturing Barometer by the global consulting giant PwC and industry body Federation of Indian Chambers of Commerce & Industry (FICCI), the sectoral growth is to be driven by strong domestic demand and an increased focus on export markets.

With the key factors like strong public sector driven infrastructure development, easing out of business and regulatory processes, and opening up of FDI in several sectors, including simplification of FDI rules for large investments driving the confidence, the report claims that over 7 per cent growth in GDP is achievable in the coming 12 months.

The report has surveyed companies that contribute approximately 12 per cent to the manufacturing GDP of the country, across automobile, electrical machinery, chemicals and textiles sectors, among others. About 76 per cent of participants anticipating a significant jump over 63 per cent of last year in the Indian economy whereas many believed that India has the potential to grow at an average rate of 7 per cent or more in 2019.

In line with the report’s conclusion, International Monetary Fund (IMF) had stated, “India’s economy is picking up and growth prospects look bright—partly thanks to the implementation of recent policies, such as the nationwide goods and services tax. As one of the world’s fastest-growing economies—accounting for about 15 per cent of global growth—India’s economy has helped to lift millions out of poverty.”

The emerging industry trends like digitisation and automation, improvement in ease of doing business, increasing spending on R&D activities and infrastructure development are among the factors attributed to the expanding domestic market. 66 per cent of respondents believes that the introduction of GST has played a prominent role in boosting the Indian economy by attracting foreign and domestic investments across new locations.

“The industry is expecting faster growth going forward due to Government’s focus on ease of doing business and introduction of reforms such as GST.  While the domestic market has been the main revenue source, in the future, exports will have a major role in promoting sector growth, both with the component as well as end product trade,” said Bimal Tanna, Partner & Leader, Industrial Products, PwC India.

He further expressed that the industry is hopeful that Government will create an ecosystem to make export growth more sustainable. Further, another positive for the sector is that industry is laying even greater emphasis on technology integration with a renewed focus on R&D and innovation. In terms of revenues, domestic sales play a dominant role for India Inc.

While domestic demand has been driving manufacturing in the country, going forward, business leaders expect global demand to play a larger role in stimulating the expansion of the manufacturing industry in India and spurring future sales of their companies. The country is extremely positive on 80 per cent growth in exports in the coming 5 years.

Puneet Dalmia, Chairman, FICCI Manufacturing Committee and Managing Director, Dalmia Cement Bharat Limited believes, “As global trade has changed significantly in the last few years with new trade routes based on Global Value Chains (GVCs), we need to provide Indian exporters with the opportunity to contribute to align with these global value chains.”

He further added that India can globally lead in exports in a number of sectors like textiles, automotive, chemicals, leather, metals and many more. With India aspiring to become a $5 trillion economy in the next few years, the industry requires an ecosystem that promotes manufacturing competitiveness and facilitates the production of goods of global quality standards at competitive prices.

To further understand why India remains optimistic of manufacturing growth, read the below infographic based on PwC-FICCI India Manufacturing Barometer: 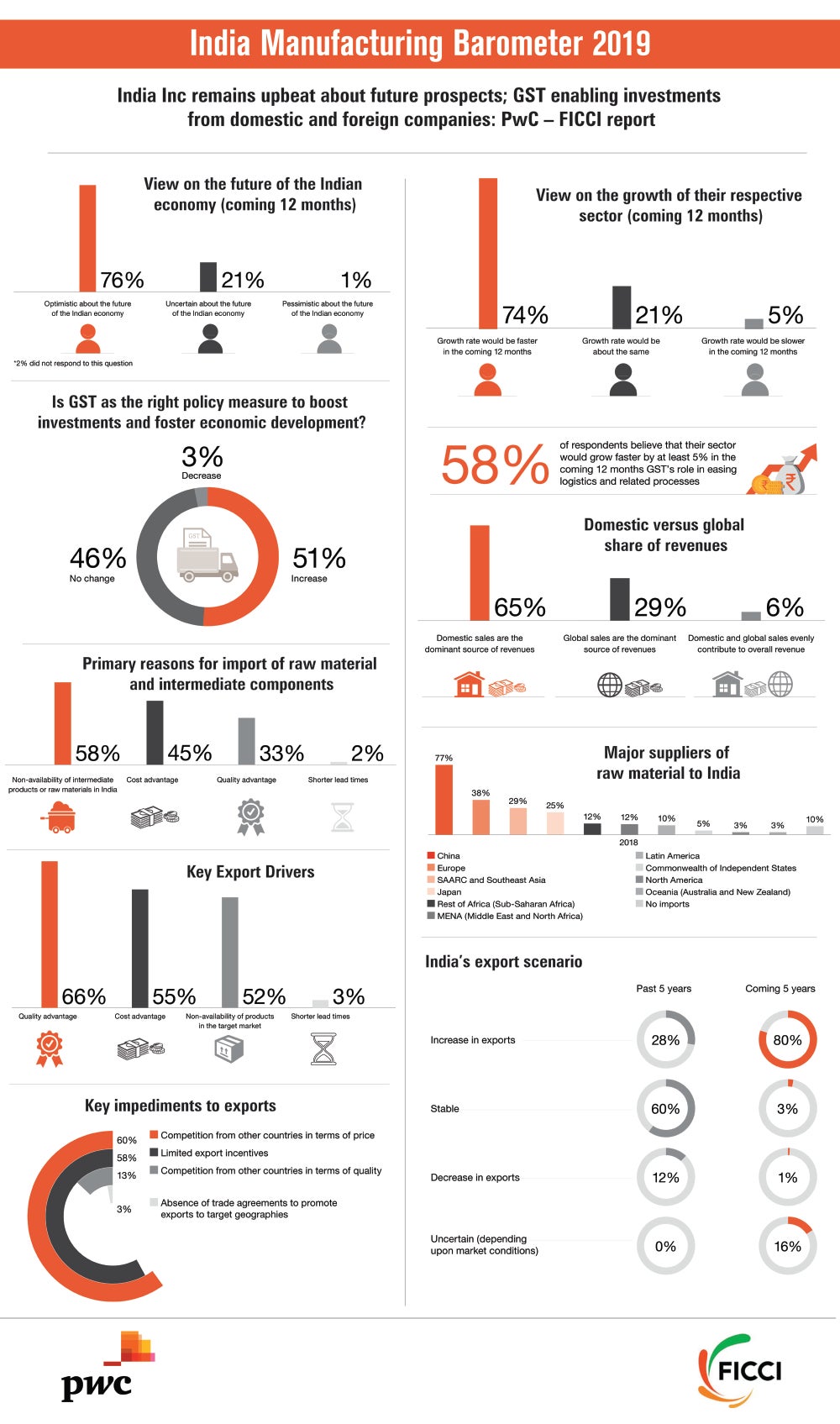 Azim Premji is 'India's most generous'