While investments from China take the lead in growth, UK gains despite Brexit doubts

Global fintech investment recorded a massive surge in 2018, and most of the investments came from Asia Pacific (APAC) countries.

An Accenture report notes that the figures more than doubled to $55.3 billion. According to the report, APAC countries, including Australia, Japan and Singapore, contributed a larger share in the growth. While most of the investments in the APAC region were led by China, the UK gained a lot of mileage in the fintech space despite Brexit stress.

APAC Countries on the Drive

In Singapore, the investments more than doubled to $365 million in 2018 from $180 million in 2017, putting the country among the top five fintech markets by funds raised last year in the APAC region, behind China, India, Australia and Japan, according to the Accenture analysis of data from CB Insights, a global venture-finance data and analytics firm.

The island nation became the third busiest market in the region when the number of deals rose to 71 from 61 in 2017, lagging only behind China and India. 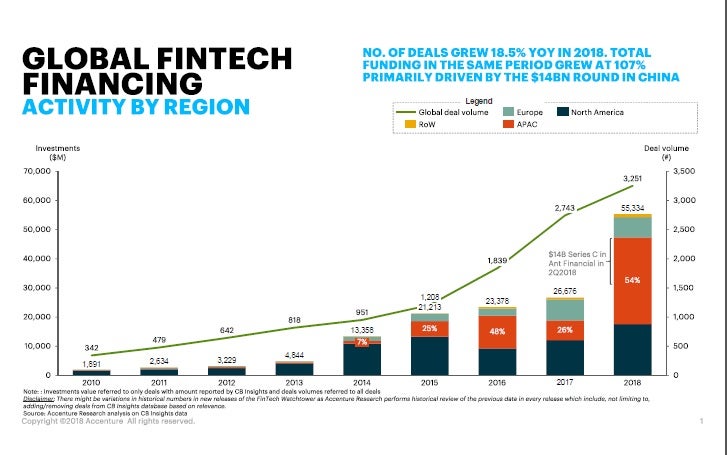 About 28 per cent of the total funds raised last year went to fintech companies in lending, while those in payments took 26 per cent and insurtechs 20 per cent, the data shows. Eight of the top 10 deals ever in Singapore took place in 2018, including the US$60 million cloud company Deskera raised in November, the US52 million insurtech Singapore Life raised in December and the US$32 million cryptocurrency and blockchain startup Terra raised in August.

“The fintech market in Singapore is going from strength to strength. It’s great to see it reaching this level of activity and diversification, which just goes to show how much it’s matured the past years,” says Divyesh Vithlani, a managing director at Accenture and ASEAN Financial Services.

“The size of the market and the value of deals still has a lot to catch up to regional giants such as China and India, but Singapore is already the third busiest fintech market in the region and this level of activity bodes well for the future expansion of new technologies in many of the different areas of finance,” he adds.

Accenture analysis shows that a high number of deals came from China, a nine-fold increase from the previous year. The deals grew to $25.5 billion. China alone accounted for 46 per cent of all fintech investments in 2018. More than half of China’s fintech investment came from the record $14 billion funding round in May of Ant Financial, which manages the world’s largest money market fund but is perhaps best known for its Alipay mobile payments service, says the analysis.

“Even with the current volatility in global markets and ongoing macroeconomic concerns, investment in the fintech sector remains strong,” says Richard Lumb, group chief executive (financial services), Accenture. “The demand for fintech innovations by banks and other financial services companies continues to grow as they face regulatory and capital pressure; competition spurred by Open Banking from new entrants, including Big Tech and neo-banks; and new and evolving security threats,” adds Lumb.