How to Become a Professional Fortnite Player

Pro gamer Nick 'Marksman' Overton explains how to make money and have fun as he prepares for the Newegg + CLG Fortnite Challenge.

Nick Overton makes a killing, literally and figuratively, as a professional Fortnite player. Last year, the 27 year old from Iowa better known in gaming circles as "Marksman" left a long trail of dead digital competitors in his wake -- and made $500,000 in the process.

Entrepreneur caught up with the sharp-eyed assassin in advance of his appearance with other members of his esports team Counter Logic Gaming at the Newegg + CLG Fortnite Challenge, a Fortnite event being held at The Hulu Theater at MSG in New York City on April 24. The event, free to the public, will feature pro players, celebrities and amateurs putting their skills on full display. One lucky fan will have the chance to take home a "Game Like a Pro" package. (Get free tix here.) 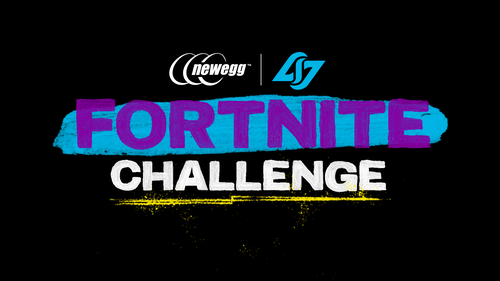 Read on to learn what Marksman says it takes to become a professional gamer (spoiler alert: lots and lots of practice) and the unexpected obstacle that nearly derailed his career before it even started.

How do people react when you tell them that you are a professional video game player?

Usually, they’re intrigued. They’ve either heard of people who play games for a living or they’ve never heard of it and have no idea it could be done. Those people are usually in the older crowd, and question why anyone would want to watch someone else play a video game.

Were your family and friends supportive?

My friends were always cool with what I did since I kept it as a hobby for a long time before it ever became my job/career. My parents were a different story. They hated that I played so many games when I was younger. They’d take my controller/power chord from me and hold it ransom all the time. They did it enough times that when I was 12, my Dad took my Xbox and all the games and sold it on Craigslist while I was at school. I got home and didn’t have any gaming console anymore.

Related: The 'Fortnite' dance lawsuits are close to falling apart

Ouch! They're probably not doing that anymore. How much money can a professional player expect to make a year?

This number fluctuates a lot! You have professional players in some games making around $20,000-$30,000 a year, while pros in some other higher-priority games make millions. It really boils down to how good you are, what game you’re competing in, and do you stream or create monetizable content in any way.

Where does that money come from? Prizes, advertising, sponsorship?

Money comes from a lot of different sources. You generate income from tournament winnings, sponsors, advertising played over your stream or YouTube videos, channel subscriptions on Twitch and fans who donate to say thank you for the content you provide.

What kind of training does it require? Are you playing for hours every day?

If you want to get really good at anything, it requires practice. Most pro players in Fortnite play for 5-10 hours a day consistently. Not all of that time is dedicated to hardcore practice, but a fair amount is. They need to practice their mechanical skills and decision making while playing. The best way to do that is to put yourselves into as many situations as possible and try different things to see what works best. The game is consistently updated though, so what works today may not work tomorrow.

Related: The CEO Behind 'Fortnite' Is Now Worth More Than $7 Billion

What first steps should someone who wants to be a pro gamer take? How do you break into this field?

This is one of the easiest and most difficult jobs to get into. Here's why: pretty much anyone can become a pro in a game they love to play. It doesn’t take years of schooling to start, it doesn’t take a ton of upfront capital to get into. It’s very open and easily accessible. But it is very difficult to be in the top .0001% of players worldwide. That goes for almost every game. You have to play a crazy amount and really try to improve and win.

How do you explain Fortnite's insane popularity?

There’s a lot of reasons Fortnite has become successful. The game is pretty well made in comparison to its competition of other Battle Royales. It’s completely free to download and play, available on basically every platform, and it’s catered to kids and adults. It’s a shooting game but, there’s no blood or gory deaths in it. It also brought something new to the Battle Royale genre which was the building aspect, where you could create your own cover. It adds a lot of strategy and skill into the game where other Battle Royale games were mainly just about your aim and positioning.

Related: 3 Things Every Business Leader Should Know About Esports

How did you go about building your personal brand? What did you do to separate yourself from other players?

I spent years creating content on YouTube and live streaming gameplay to help grow my own brand and channels. I always tried to separate myself by showing high-end gameplay with informative content to help others improve. Then I added in a lot of funny content to add some diversity. I’ve always tried to do stuff that others aren’t doing to attract people though. Using interesting strategies, combinations of weapons or doing crazy plays that people would almost never be able to pull off. That’s helped to draw people in and keep them around.