The Co-Chair for Energy and Environment at Singularity University on how he envisions (and enables) the future.

By Tamara Pupic May 13, 2019
Opinions expressed by Entrepreneur contributors are their own.
You're reading Entrepreneur Middle East, an international franchise of Entrepreneur Media.

As far as climate activists go, Ramez Naam is someone who’s taken on a variety of roles to amplify this growing social movement. Besides being the Co-Chair for Energy and Environment at Singularity University, Naam’s resume also pegs him as a computer scientist, a cleantech angel investor, and a public speaker on energy, innovation, and disruption.

In all of these capacities, Naam has been educating the public on different ways to address climate change, advising governments on effective climate and clean energy policies, and supporting innovation in clean technology by investing in clean energy startups. That said, it is not unusual for today’s entrepreneurial individuals to step in where governments and societies have failed to properly address pressing global crises; however, Naam went a step further than most of them- he wrote books to inspire future technological advancement and ensure its wide acceptance.

He is the author of two non-fiction books, More Than Human: Embracing the Promise of Biological Enhancement (2005), and The Infinite Resource: The Power of Ideas on a Finite Planet (2013), as well as of the award-winning Nexus novels, a trilogy that includes Nexus (2012), Crux (2013), and Apex (2015). “All of my work -my non-fiction books, my novels, my work in energy- is driven by a fascination with the future, which is a place where we are going, no matter what,” Naam says. “We spend most of our time staring at the present, or staring at the next day, but I have always been fascinated with what the world would be like in 50 or 100 years. And that’s what drives the curiosity behind all my work.”

Naam spent 13 years at Microsoft, climbing up the ladder to the position of Partner and Director of Program Management, and leading teams working on the early versions of Microsoft Outlook, Internet Explorer, and the Bing search engine. He has been granted more than 20 patents, on many of which his co-inventor is Bill Gates. As an entrepreneur, he founded and ran Apex Nanotechnologies, a software company dedicated to accelerating molecular design. And these days, Naam is entirely focused on how solar, wind, energy storage, and related technologies can disrupt the energy industry, and do it faster than expected.

Today’s global push for an energy transition towards renewables -embodied in the 2016 Paris Agreement- has mainly been led by policymakers driven by collective awareness of environmental and climate concerns. However, Naam has been speaking (and writing) about why national policies might not be effective enough to bring down the whole world’s greenhouse gas emissions from fossil fuels. One piece of evidence to support Naam’s contention is in World Economic Forum’s Fostering Effective Energy Transition report for 2019, which stated that the pace of change to clean energy across the world had slowed to the lowest rate for five years, with investment in clean energy down by almost 10% last year. Furthermore, the report ranked 115 countries in terms of their performance and readiness for energy transition, and showed that in 2019, the year-on-year increase of the global average score was the lowest of the last five years. The UAE ranks 59th, the highest score of all the countries in the MENA- the region, Naam says, should pay close attention to the renewables sector. “For this region, it is important to understand that the peak of oil demand could happen this decade,” he explains. “The world will still be burning oil for decades, but the demand may not be growing after this decade, maybe even after the middle of this decade. It might start shrinking. The good news is that this region has a tremendous opportunity as well, because you are also drenched in sun, and there are energy demands at places that have less good sun and less good wind, which you could fulfill in other ways. For instance, this region could turn solar power into hydrogen and that into green natural gas or into ammonia to export to other regions, such as Europe, which doesn’t have enough sun to handle its winter heating needs.”

I talked with Naam when he spoke at the Abundance 360 Summit in Dubai. He advocated the active participation of the private sector in the ongoing decarbonization process that, he explains, benefits from clean energy startups developing more innovative and less expensive technologies, and then, both creating and meeting the demand for reliable, affordable, and environmentally responsible energy sources around the world. “I am one of the early people to see that things like solar power and batteries had an exponential price decline,” Naam says. “I made some forecast in 2011 on the price of solar, and it actually dropped in price faster, and now the same thing is happening with batteries and electric mobility.” 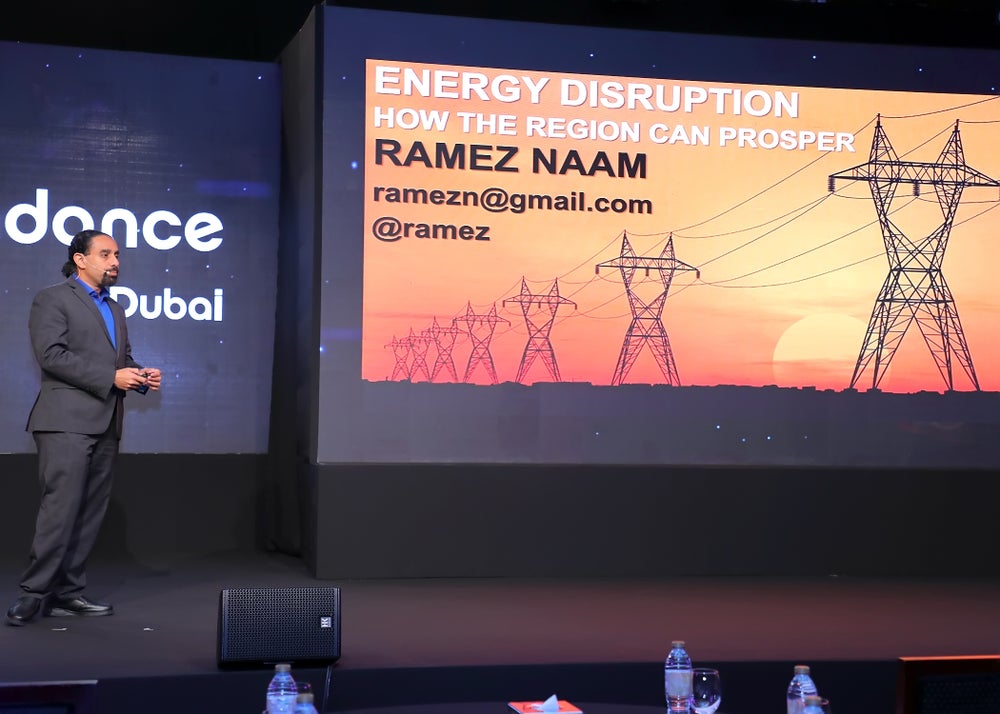 The market for these new technologies is growing as well- according to the World Economic Forum, citing the International Renewable Energy Agency, the share of electricity in total final energy consumption will rise from 19% to about 44% by 2050, and the share of renewables in the electricity generation mix will grow to about 85% in 2050, up from the current 25%. For that reason, Naam is an active investor in clean energy startups, with his AngelList profile listing one exit and 24 current investments. He also creates syndicates open to other qualified investors. “In clean energy, the companies that have the best likelihood of exit and the best return on investment are the companies that have network effect,” he says. “They are usually asset-light companies which means that they are software companies, IoT companies, so companies that are data oriented. The other ones are finance oriented, like SolarCity, which is not really a solar company but a financial engineering company.” SolarCity is a San Mateo-based solar installer offering low-cost solar leasing programs where homeowners paid nothing upfront and spread out their payments over 20 years. Tesla purchased SolarCity in November 2016 for US$2.6 billion, stating its aim to turn into a full-circle renewable energy company, selling three interconnected products to the public- solar roofs, home batteries, and electric cars.

However, in addition to these two business models, Naam is open to investing in hardware development as well. “Occasionally, there is a company that does something in hardware that is such a big breakthrough that I can’t resist investing in,” he says. “They are high-risk, but they are also financially high return. I’ve just invested in a company making a new kind of solar that could nearly double the energy produced by solar panels, which would be the biggest breakthrough in solar in 30 years. For that company, I invested in a seed round, but I’m also about to invest in a Series C of an energy storage company which makes a new kind of battery that is cheaper. So, I do the whole spectrum.”

When it comes to Naam’s writing, his non-fiction writing debut in 2005, More Than Human: Embracing the Promise of Biological Enhancement, was borne out of the need to reframe certain perspectives on the world, in particular of The President’s Council on Bioethics, established by George W. Bush. He explains, “They were saying that if we could improve human ability to extend our longevity, or stay young longer, or make ourselves smarter, or connect our brains to computers, it would be very unethical and very suspicious. I thought that was totally insane. It’s what we humans do, why we have cell phones, or contact lenses, and why women have birth control pills- because we want to control and improve our biology. So, I wanted to write a book, and explain to the public what the options were, and why it basically was ethically okay.”

It is no secret that fiction, and particularly science fiction, has inspired scientists and entrepreneurs to pursue technological advancement. From Tom Swift, a series of American juvenile science fiction and adventure novels, inspiring Steve Wozniak to become an engineer, to Neal Stephenson’s The Diamond Age, which had elements Jeff Bezos made use of to develop the Kindle, while another of his books, Snow Crash, helped Reid Hoffman and Peter Thiel to brainstorm an idea that would later become PayPal. Naam, too, used fiction as a medium to present an optimistic view of the future. “I had quit at Microsoft for the second time, and I wanted to write a book that was about saving the planet with innovation, but my agent, quite frankly, didn’t like the idea. My first book got good New York Times reviews, but nobody really bought it. So, I said I was going to try writing fiction, although I had no idea how hard it was, but it turned out that my novel sold a lot more than my non-fiction. It hits people emotionally, because when you just give them dry facts, most people don’t care, but when you give them stories, they get attached to a character. So, I thought that fiction was a better vector to get some of these ideas out to people.”

The inspiration for the Nexus trilogy, a post-cyberpunk thriller series of novels published between 2012 and 2015, derived from Naam bridling over some initiatives of the US government, in particular its War on Drugs and its War on Terror. “I thought that they were both over-reactions to certain situations, where the actions of the US were actually very harmful,” he says. The trilogy follows the protagonist Kaden Lane, a scientist who works on an experimental nano-drug -Nexus- which connects human minds together. Nexus tied for Best Novel in the 2014 Prometheus Awards by the Libertarian Futurist Society, and it was also shortlisted for the 2014 Arthur C. Clarke award. Apex won the 2015 Philip K. Dick Award. About the writing experience, Naam says, “Writing fiction can be very fun because you can procrastinate, but once you get started and you get into the flow of it, it’s like seeing a really cool scene in a movie. One scene which takes five minutes in a movie takes you the whole day to write it. Non-fiction is more dry, but it teaches you a lot. Usually, when you start a non-fiction book, you start it because you think you’re an expert, that you know a lot, and by the time you finish it, you actually now much more than when you started it.”

When explaining his process of putting all of these stories together, Naam says that both sci-fi writers and entrepreneurs try to envision the future. “You are always trying to understand two things. Firstly, what the world will look like at some time in the future, because whatever the product you are making, it’s not already there, so you are looking at what’s the world going to look like then. And, secondly, you are thinking about what people’s motivations are. If you want to make a product, you have to actually satisfy some desire that they have. Storytelling is the same, you write about these trends in the world, but also about what different people want. The best stories are about people who want different things, because they all believe that they are the good guy, they all have reasons for what they want. In the real world, no one thinks of themselves as a villain; everyone is either the hero or the victim of their story. Similarly, when you are making a product, you have to understand that about your customers.”

Startup Spotlight: Community-Based Platform Hayi Raises US$325,000 As It Looks To Expand Its Services Beyond The UAE's Neighborhoods