Corporate Tax Cut is a Win-Win for Businesses, Investors & Stakeholders. Here's Why

In a major boost to the Indian business ecosystem, Finance Minister Nirmala Sitharaman announced the slashing of corporate tax to 22 per cent from 30 per cent for domestic companies and 15 per cent for new domestic manufacturing companies if they do not avail any incentive or concession. The move is being touted as the biggest reform since 1991. India has always been seen as a services-driven economy, this move will push the secondary or the manufacturing sector of the country towards growth and progress.

With Sitharaman announcing the new reforms, it is time decode how this will prove to be a game changer for Indian businesses, stakeholders and investors.

Vikas Halan, Senior Vice President, Corporate Finance Group, Moody's Investors Service, says that the government’s decision to reduce base corporation tax will boost net income of Indian corporates and is credit positive. He says, “Extent of final impact on credit profiles of Indian corporates will depend on whether they utilize the surplus earnings for reinvestment in business, debt reduction or high shareholder returns.”

The announcement received resounding applause from all corners of the country including the Dalal Street, Sensex jumped by 1,921 points and Nifty crossed the 11,000 mark, witnessing a jump of over 4.5 per cent, a record high in the last one decade.

Chandrajit Banerjee, Director General, Confederation of Indian Industry (CII) said that the reduction in the corporate tax rate has been a long-standing demand from industry, as the high rate of taxation was making Indian industry uncompetitive vis-à-vis its peers. He further said, “The decisions to bring the corporate tax rate down to 22per cent without exemptions, reduce MAT to 15 per cent and tax new manufacturing companies at 15 per cent will have a very positive impact on the cost of doing business in India. Together with earlier announcements, CII expects this to truly revive the ‘animal spirits’ of the industry and create the spark for igniting economic activity sooner rather than later.”

The statement also said, “Significant cut in corporate tax for domestic firms will accelerate the investments in manufacturing, open up new employment opportunities and kick start economic growth trajectory of the country.” The move will also strengthen India’s position among the competitive economies in the manufacturing sector such as China, United States, Germany, Japan, South Korea, Mexico and Canada, among others.

Anand Mahindra, Chairman of Mahindra Group, tweeted from the US, applauding the move and at the same shutting down the trolls against Sitharaman stating that this move should have come earlier. 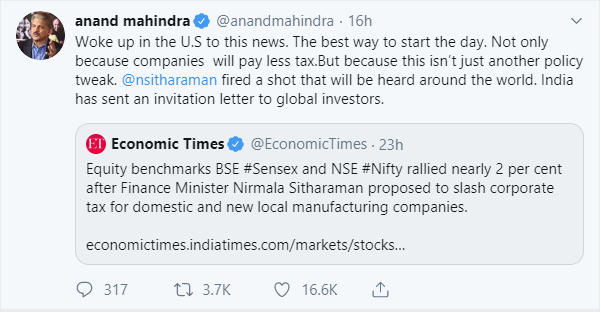 Saurabh Srivastava, Chairman and co-founder of Indian Angel Network says that the government’s move will provide a radical spur to the corporate activities in the country. He said, “If implemented effectively, it will reduce the cost of capital which will result in a greater influx of funding into businesses. Indian companies stand to benefit greatly from this initiative. Likewise, the decision of encouraging businesses to reroute their CSR 2 per cent spending into state-sponsored incubators will further contribute towards driving innovation and entrepreneurship with renewed vigor.”

#Budget2019: Here is What the MSMEs Gained

Finally, the Feds Are Cutting Startups Some Slack: Why the New Tax Law Is a Game-Changer

Trends That Will Be Visible in Real Estate Post COVID-19