How Johnathan Ruggiero and Michelle Luchese Left Their Jobs, Moved Across the Country, Got Married, and Started a Business in a Month

And why 'stupid confidence' helped skyrocket them to success.

October 24, 2019
Opinions expressed by Entrepreneur contributors are their own.

Quitting your job, moving across the country, getting married, and starting a business are some of the most stressful life transitions, so adjusting to just one of these changes can take time. Yet Johnathan Ruggiero and Michelle Luchese decided to tackle all of them at once.

When Luchese unexpectedly lost her job, the couple decided not to treat it as a setback. Instead, they took advantage of the opportunity to make a change — or two or three.

“We were living in a tiny apartment, doing the same thing year after year and not going anywhere,” says Ruggiero, who had been working in the same job for 10 years. “We got to the point where it was more painful to stay the same than take a risk and change everything.”

So Ruggiero quit his job and they moved from California to Florida, where their wedding was already planned — with the date just a couple weeks away. With wedding debt and no savings, they were up against a ticking clock financially.

Then they had an idea. They thought it was a good one because it solved a problem they had just experienced. The couple started a wedding ring company, Manly Bands, and within three years have grown it to over eight figures. However, Luchese says this kind of “overnight success” only happens after years of failure. “You try different ideas over and over until one day, with a little luck, you apply what you learned to something that works,” she explains. They should know because their journey was no different.

A Match Made in Heaven — and on the Internet

With a father in business leadership and an entrepreneurial mother, Ruggiero says he was always interested in starting his own venture. But his true passion was filmmaking; so after he studied the subject in college, he was off to Los Angeles to start his career in the industry.

He made his way by freelancing as a cameraman, video editor, and doing other odd jobs. After a few years of this, a friend referred him to Getty Images, where he started working as a video editor capturing footage of movie premieres, red carpet events, and other Beverly Hills happenings.

Luchese shared his love for film. After attending New York University’s Tisch School of the Arts, she landed a role in the movie “212,” which premiered at the Sundance Film Festival. She moved to Los Angeles and landed supporting roles in the acclaimed HBO series “True Blood” as well as several independent films.

They met on Match.com in 2009 and bonded over their mutual drive and passion for creativity. “We often joke that Match.com was the best $60 we ever spent,” says Luchese. “We’re both creative and super passionate about our careers. I knew our life together would be an adventure.” 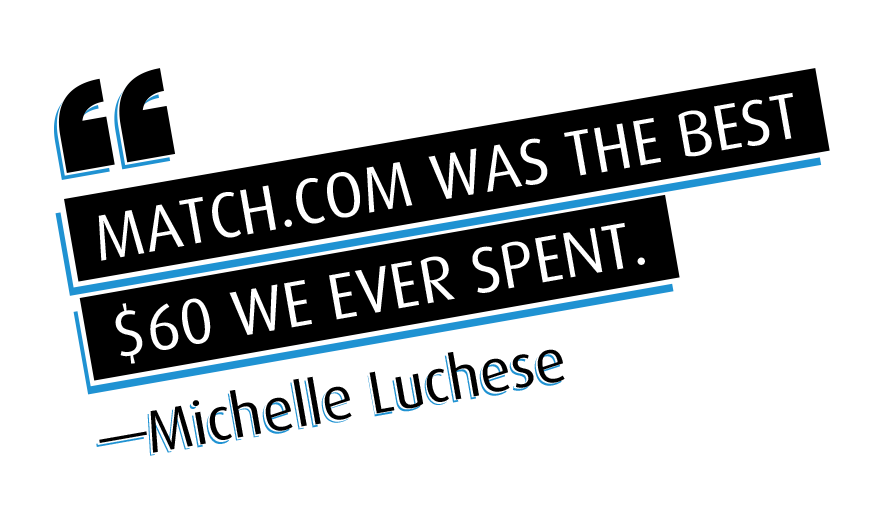 “Before I met Michelle, I was a struggling entrepreneur with a million ideas and little direction,” says Ruggiero. “I had a lot of self-doubt and got overwhelmed because I didn’t know where to begin. Michelle kept me grounded and focused. She empowered me to be who I wanted to be.”

Ruggiero’s friends and mentors encouraged him to explore his passion for entrepreneurship. So he launched a resource for actors called Actor Rated, then started building FilmScreenr.com, a place to rent independent films, in 2011. He invested thousands in savings into website development before discovering there were already several competitors and shutting down the project.

Shortly afterward, Ruggiero launched two digital marketing agencies with his future best man. While one only lasted about a year, the other lives on today. The business partners also dabbled with a bracelet company and teeth whitening business, both of which they later sold. While they only made a few thousand dollars, it was enough to cover their expenses.

“I could learn all sorts of things, take risks, and fail because I still had income from my full-time job,” says Ruggiero. But soon he would have to jump without the safety net. 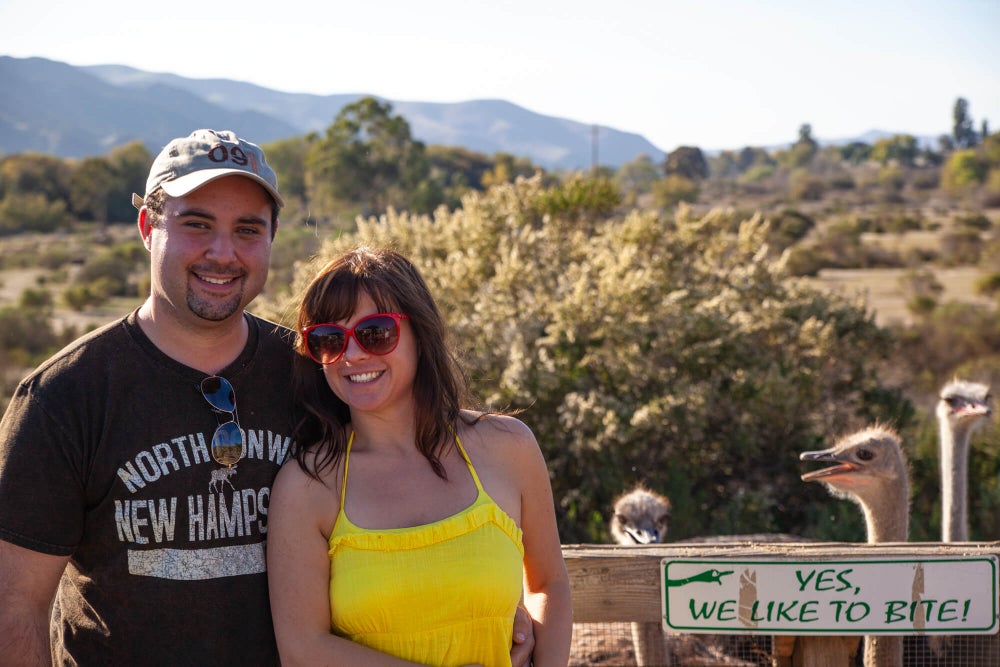 One of the couple’s first dates was to an ostrich farm in California.
Image Credit: Courtesy of Johnathan Ruggiero and Michelle Luchese

Stupid Confidence and No Other Option

During this time, Luchese also pursued her passions on the side, juggling her acting career while working full time as an administrative assistant. However, almost a year after the pair got engaged in 2015, she was laid off.

“We were overwhelmed and stressed, and planning a wedding didn’t help,” says Luchese. “Suddenly I was out of work — and Johnathan was ready for a change — so we decided to go crazy and change everything.”

After nearly 12 years in Los Angeles, the couple say they decided to “get crazy” and take a break from California by moving across the country to Florida, where her parents lived and where Ruggiero and Luchese were set to be married.

In between packing, they continued to plan for the big day. “We had a horrible time finding a wedding ring  for Johnathan because he has large fingers,” says Luchese. “Jewelers said our only option was a boring white gold band that would have to be custom made, which was really expensive.”

The couple decided to do their own research and discovered rings made of tungsten and titanium; however, they had a bad experience with the few companies that sold them. They knew they could do better, and a fleeting idea to start a company came up in conversation the day before they moved — but they had to finish packing. 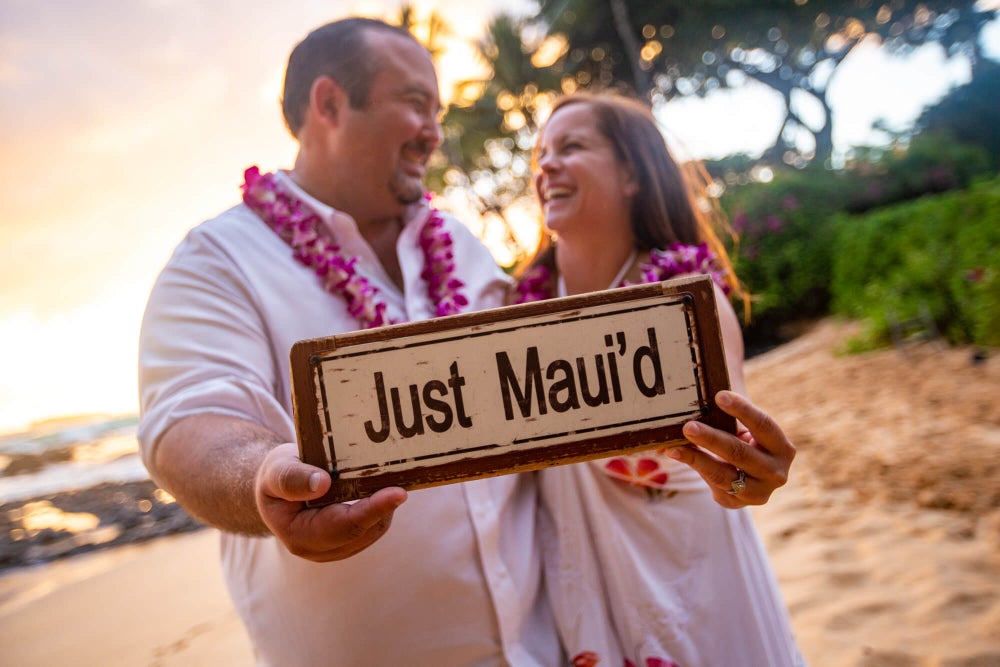 They married on October 22, 2016, in Santa Rosa Beach, Florida. When the dust settled, it was time to find a source of income again. Their plan was to do real estate photo and video marketing, but they had trouble convincing realtors that this would make a difference in their listings. So they sat down to discuss Plan B, and the idea for Manly Bands surfaced again. This time, they decided to give it a shot.

They harken back to meeting on Match.com as inspiration for the company. “We thought selling wedding rings online made sense — because after all, awesome things happen online,” Luchese says with a laugh. Ruggiero adds, “Maybe it was just stupid confidence, but we knew it was going to work; it had to work. It’s amazing how motivated you are when you have no other option.”

The Universe’s Sense of Irony

The couple had learned from the demise of FilmScreenr and started slowly, first proving the concept, then improving. They designed and sourced just enough rings for a handful of orders to test the idea. Ruggiero was sufficiently familiar with Facebook advertising to generate a few sales, while Luchese wrote the website copy.

Thanks to their own experience buying a wedding band, they knew to prioritize product quality and customer service from the start. But without any backup options if the company failed, Luchese says, “We realized it had to be OK if everything wasn’t perfect in the beginning; we just had to get it out there. As soon as we knew it was going to work, we could become the overachievers that we are.”

Ruggiero says the next thing they knew, they had 10 sales a day. He recalls going from “I really hope this can get off the ground” to “Oh crap, this is actually working. What do we do?” in the first month. He believes there was a lot of luck involved in their success. “We fell into a niche based on a void in the industry and a need we didn’t even know we had until we got married.

“It’s funny, I wanted to be settled in my career before we got married,” he adds. “But after seven years of dating, Michelle started to wonder what we were waiting for. The universe has a sense of irony, because life didn’t really take off until we got married.” 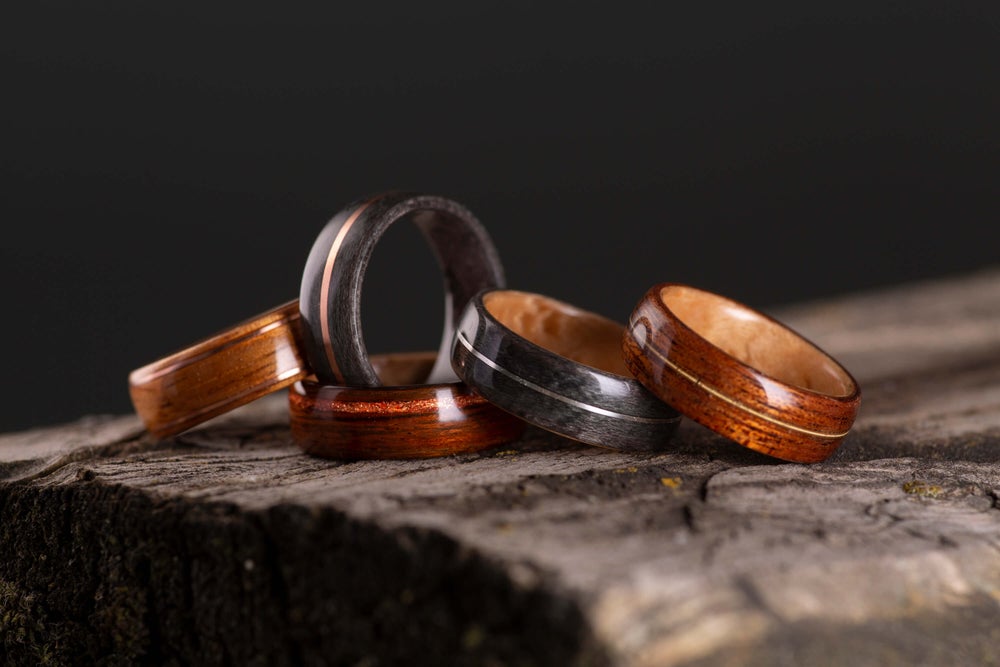 Things certainly didn’t take off because they followed the rules. Most of their close friends and family members worked with them at some point, and several still do. Conventional or not, their approach is proving successful. The couple doubled their business in a six-month period and say they tripled their staff in 12 months.

While some perceive the Manly Bands name negatively, Luchese explains that they’re not just a macho brand catering to ax-swinging men. “All we’re saying is that a guy can get excited about buying a wedding ring,” she says.

“We love everyone, regardless of their gender or sexual orientation,” she adds. The company also offers couples’ rings, and is about to launch a line of women’s rings as well as fashion rings that are “wackier” than those you’d wear down the aisle.

The duo have other big plans, including returning to their filmmaking roots. In the meantime, they continue to mix things up. Two years after moving out of Luchese’s parents’ house, they decided to tour the country in an RV before settling in Utah and buying their first home. “We're constantly joking around,” says Ruggiero. “At the end of the day, you can’t take life too seriously.”

He practices what he preaches with his most important piece of advice: “Join Match.com. It was the best decision of my life,” he laughs. “But seriously, surround yourself with people who support you. We would not have done any of this without our friends, family, or each other, and can’t imagine doing it with anyone else.”

Connect with Johnathan and Michelle by visiting their website.