How is India's Bank Deposit Insurance Compared to Other Countries

The government has decided to increase the current bank deposit insurance limit of INR 1 lakh, which is least among India's BRICS peers and other major economies
Next Article

Amid the crisis of Punjab and Maharashtra Co-operative Bank (PMC Bank), finance minister Nirmala Sitharaman on Friday announced that the government will bring in legislations to increase the current insurance limit of INR 1 lakh on bank deposits. The ministry will move the amendments during the upcoming Winter Session of the parliament.

The deposit insurance limit is the maximum amount that is paid to a depositor if a bank goes under. In India, the insurance cover of INR 1 lakh is applicable for bank savings deposits, fixed deposits and recurring deposits collectively.

Sitharaman did not mention what the new limit would be.

How India Fares Compared to other Countries

In India, the insurance limit is lowest compared with its BRICS peers and other major economies (see table). This limit was last revised in 1993. 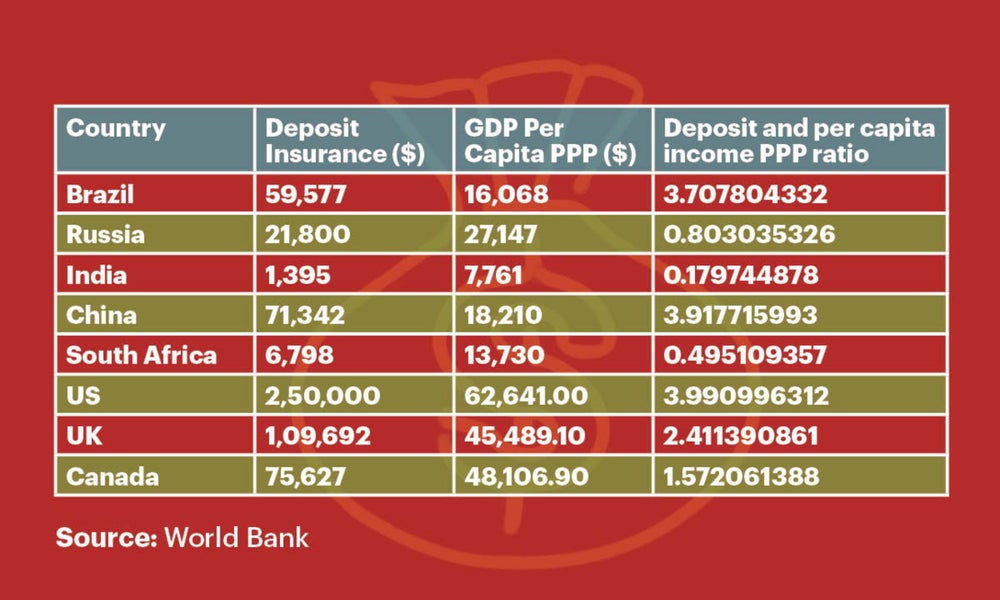 Among the BRICS nations, Brazil provides the biggest coverage of INR 1.7 crore per depositor, followed by China with a cover of INR 51.1 lakh.

India scores poorly even when the insured amount is seen as a percentage of per capita income at PPP. The US and China has the highest score of nearly 4 per cent, whereas India has a woeful score of 0.17 per cent.