Credit card outstanding balance increased by 40.7 per cent compared to the same time previous year, pushing the total balance to INR 109 thousand crore. The total number of active credit cards in circulation grew by 30 per cent year-on-year to reach a total of 44.5 million in Q3 2019. 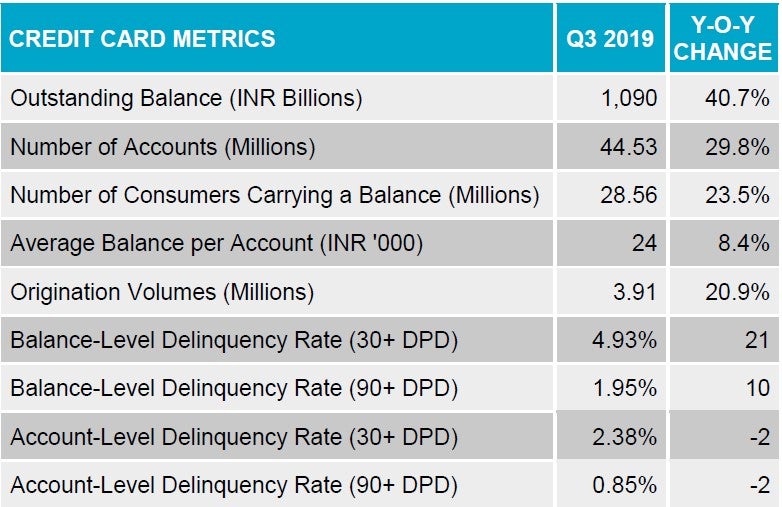 On the personal loans front, new accounts increased by nearly 48 per cent between third quarter of calender year 2019 and 2018, whereas origination volume (disbursed loans volume) saw a whopping 133.9 per cent growth during the same period. This growth was primarily driven by non-banking finance companies (NBFCs), shows the report: “NBFCs originated 5.3 million personal loans (of the total 7.28 million) in Q3 2019 compared to 1.6 million in Q3 2018.” Of the 5.3 million loans disbursed by NBFCs, almost 78 per cent loans went to the micro segment with a loan size of up to INR 25,000. 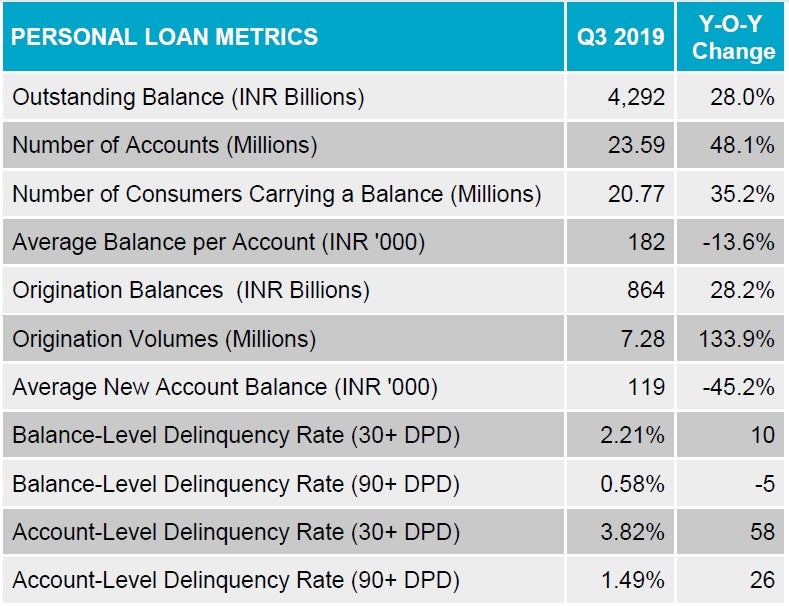 Interestingly, balances in both the credit options have incresed significantly in semi-urban and rural locations, compared to metro cities. Experts believe that growing demand for small-ticket personal loans from non-metro cities is indicative of low income households’ reliability on credit for living expenses. “Consumers may be increasingly turning to consumption credit products to help finance day-to-day living expenses. This shift in consumer credit demand warrants ongoing monitoring to understand the impact on lender portfolios,” said Abhay Kelkar, vice president of research and consulting, TransUnion CIBIL, in the report.

In the case of both credit card and personal loans, young earners continue to be the target audience for issuers, the report shows. Age group of 25 to 35 years constituted 46.4% of total credit card origination volumes in Q3 2019, whereas almost 42.6% of personal loan acquisitions are from consumers in the age group 18-30 years. Origination volumes of personal loans in this age group have increased by 2.9 times in Q3 2019 over Q3 2018.

In contrast to spike in consumer lending categories, demand for home and auto loans has decelerated further as the overall credit growth declined amidst the ongoing slowdown.

Dark days for the Indian auto industry are not over yet as decline in growth of passenger vehicle sales continued to impact auto loan growth, the report said. While the overall auto loan origination volume declined by 1 per cent, originations from consumers in below prime risk (credit score of <730) segment increased by 3.5 per cent compared to the same period last year. 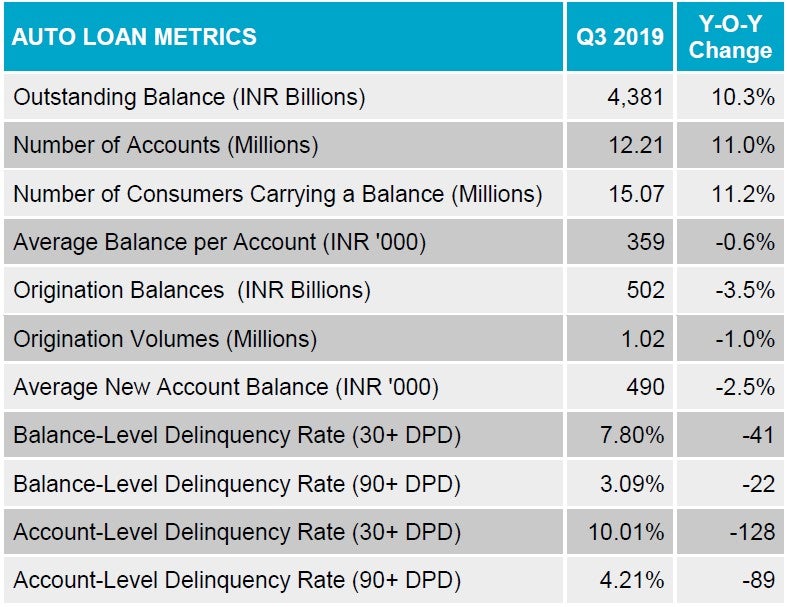 Home loan numbers look worse as aspiring buyers are putting off purchase decisions because of lack of confidence in the housing sector. The origination volume declined as much as 12.9 per cent year-on-year, with a total of only INR 6 lakh worth home loans disbursed in Q3 2019. Affordable housing segment, defined as loan size up to INR 25 lakh, was the worst hit with lowest growth of 4.1 per cent in the last one year.

NBFC Delinquencies on the Rise

While NBFCs drove the growth of personal loans in the last one year, they also witnessed maximum increase in overall delinquency—borrower missing due date for a single payment—rate at 51 bps in Q3 2019 from the same time last year. It is all the more concerning as delinquencies of private banks and PSUs have in fact improved by 26 bps and 9 bps, respectively, during the same time.

Spike in NBFC delinquencies indicate poor credit selection by lenders at a time when the segment is already stressed.

Of the overall increase in home loan delinquencies, housing finance companies (HFCs) increased by 49 bps, PSU bank’s rates improved by 24 bps and that of private banks remained at same levels.

Increase in LAP delinquency rate was the most pronounced at 52 bps. Here too the increase was mainly driven by NBFCs whose 30+ days past deals (DPD)—loan payment missed for over 30 days—rate and 90+ DPD—loan payment missed for over 90 days—rate have increased by 135 bps and 59 bps, respectively, between the third quarter of calender year 2019 and 2018.

The credit information company has given this quarterly overview on retail credit trends by analyzing consumer credit database of more than 600 million files, which profiles nearly every credit-active consumer in India.