Stay informed and join our daily newsletter now!
Will be used in accordance with our Privacy Policy
Mariella Moon
January 23, 2020 2 min read
This story originally appeared on Engadget


Have you ever gotten a Twitter DM that made you wish you could give it a thumbs down, laugh at it or just generally react to it like you can on Facebook? Well, now you can. Twitter has rolled out emoji reactions for Direct Messages, which looks similar to Facebook's with a few key differences. Instead of the heart eyes and angry emojis, you're getting heart and fire reaction options. 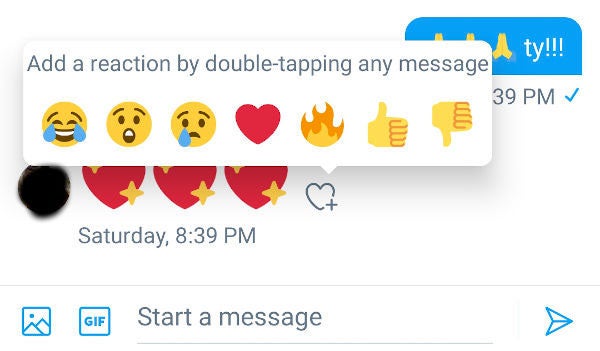 You can easily react to a DM by clicking or tapping on the heart-plus icon that appears right next to a message. Double-tapping messages brings up the emoji panel, as well. The recipient will get a notification if you react to their DM, and they'll get your reaction as a text reply if they're using an older version of the app that doesn't support the feature. Based on what we've seen, you can add a reaction even to years-old messages, though we'd advise against going that route to not-so-subtly remind your ex that you exist.

To add a reaction, click the icon that appears when you hover over the message on web or double tap the message on mobile and select an emoji from the pop-up.

3 Strategies to Revive And Grow Your Facebook Business Page