Your Setbacks During COVID-19 Will Fuel Your Success Tomorrow

You already know this because you've overcome challenges before. Now you'll do it again.

If there’s a single word for how this coronavirus crisis feels, it’s this: interrupted.

But I want you to know something: Interruptions aren’t endings. They’re the start of something new — and if you embrace the change, the next thing will be even better.

I was reminded of this recently, as I read my colleague Terry Rice’s tale of being laid off during the recession. Things got bad. Bills were overdue, and his electricity was turned off. But he used his downtime well. He took classes on digital marketing and remade himself into an expert. It led to the career he has now — one that’s infinitely better than the one he had before.

Every entrepreneur has a story like this, and I’ve heard so many of them in the past few weeks. They launched their business after being laid off, or after quitting, or after their prior company crashed and burned. “I would never have started what has been a dream come true without being fired,” former TV news anchor Kate Sullivan told me. She produces and hosts a show called To Dine For. “Now I love every second of what I do.”

I have a similar story, in fact. I began my career as a small-town newspaper reporter, and although I hated the work, I stuck with it. I didn’t know what else to do! Then, one day, I arrived to find a letter from my boss. “I am giving you two weeks to prove to me that you will be an asset to the newspaper,” he wrote, “and not the detriment and drag on the newsroom that you have become.”

I’ve kept this letter for the past 17 years. Want to see it? Look! 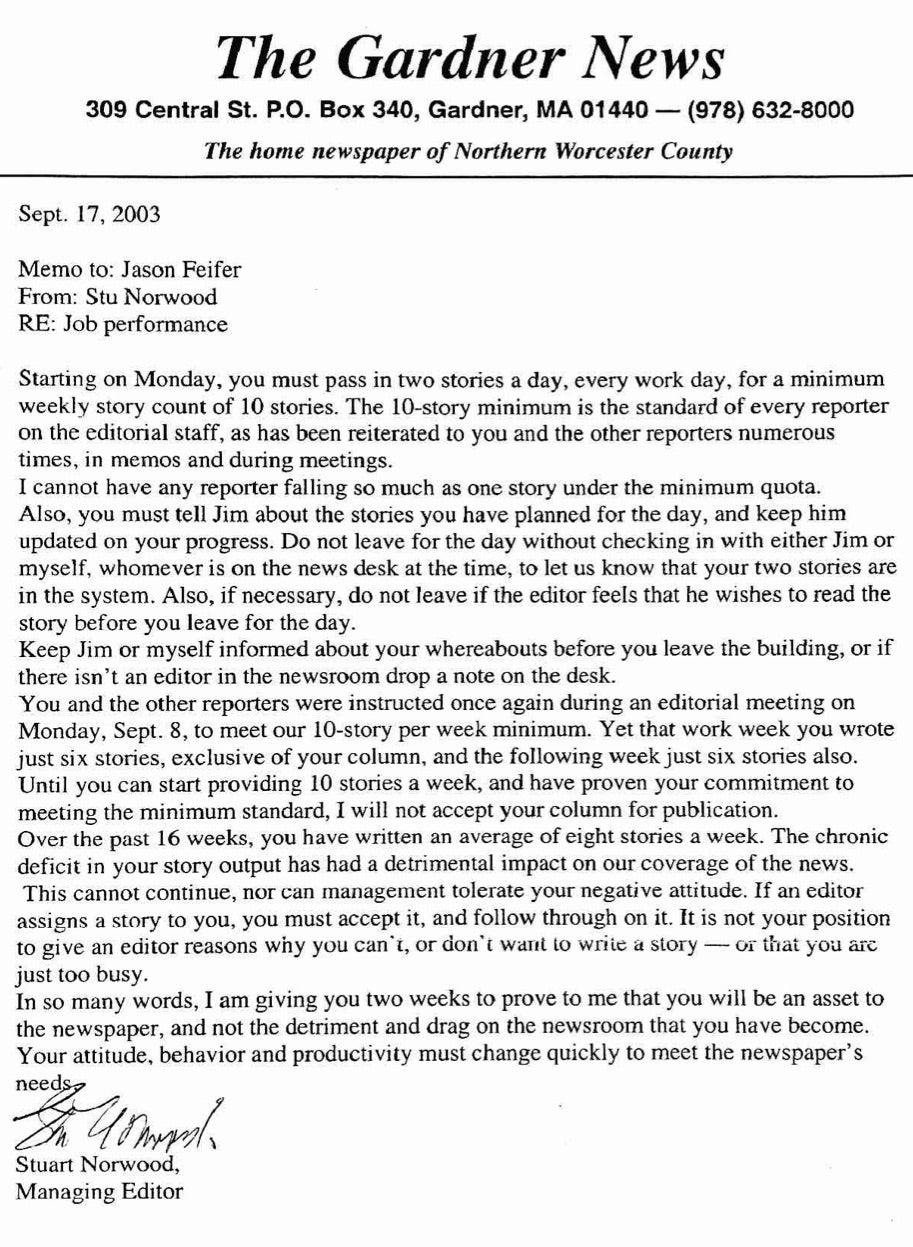 Why did I keep this? Because it helped me realize something important: I had a lot of passion, but it wasn’t for that job, and I should never settle for something I hate. So I quit. I began plotting my career. I made new connections and built new skills. I am here, writing to you now, because of that interruption.

If you’re feeling down, or stalled, or lost, or just unsure of what comes next, then allow me to recommend something: Look back on your own life, and recognize your strength. I’m sure you have a story like this — of a failure that led to something greater. You are the product not just of good fortune, but of stumbles and downsides and perhaps even tragedy. Your rise didn’t happen by accident. You turned things around because you are adaptable. You refuse to stop.

If you did it once, you can do it again.

How do I know? Because I’ve seen it happen so many times. I’ve talked to entrepreneurs who had nothing, and then built enormous things, and I don’t think it’s a fluke. In fact, I just interviewed Dwayne “the Rock” Johnson and his business partner, Dany Garcia — two people who, years ago, were struggling to figure out their career paths. Johnson once literally had $7 to his name. Together, they came to understand who they were, what they had to offer the world and, most importantly, that they’d have to constantly adjust their plans in order to get there. “We aren’t attached to process,” Garcia told me. “We are only attached to outcome.”

Those are the purest words in entrepreneurship. The path will change, so don’t even bother getting attached to it. Just focus on the outcome.

But isn’t that the fun of it?