By Shipra Singh April 22, 2020
Opinions expressed by Entrepreneur contributors are their own.
You're reading Entrepreneur India, an international franchise of Entrepreneur Media.

As the fears of a global recession loom large in the wake of Covid-19 crisis, Indians are starting to get anxious about their household earnings.

A whopping 87 per cent respondents to a survey conducted by community platform LocalCircles fear that their household earning will go down over the next one year. Of this, almost two-third respondents expect 50 per cent or more reduction in earnings. The survey received 17,000 responses from over 150 districts. 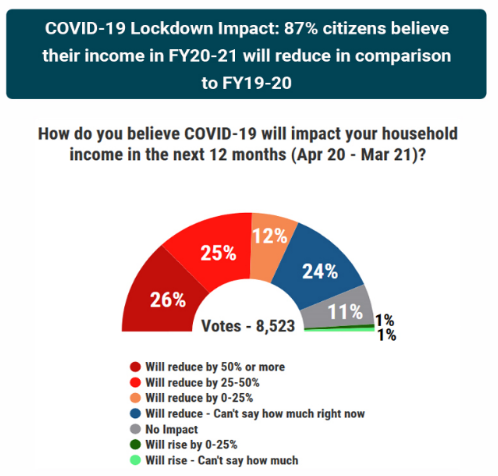 In another consumer sentiment survey conducted by McKinsey, about 66 per cent Indian respondents reported that coronavirus may hurt their finances for the next two to six months. McKinsey had conducted this survey between 23 March and 30 March when India was preparing to go into a complete lockdown. Since then, several reports of lay-offs, salary cuts and furloughs have surfaced across industries.

In an earlier survey by LocalCircles that was conducted in first week of March right after 10 positive cases of Covid-19 were reported, only 28 per cent respondents said they expect their household earnings to reduce. In over 45 days, the number has more than tripled. 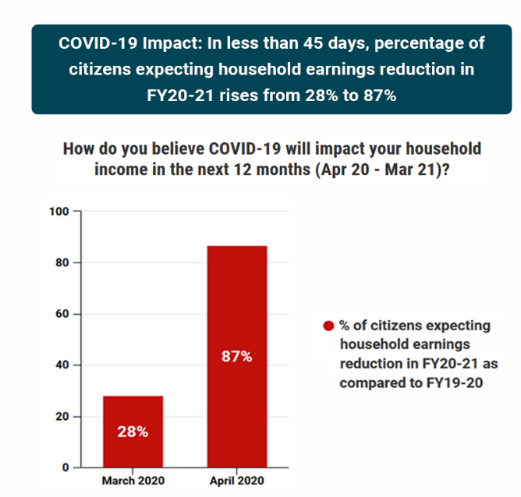 Loss of income also tops the list of worries of many, with 31 per cent reporting that they are most stressed about their job, business or finances. This is followed by negative news related to the crisis (26 per cent) and fear of getting infected by the virus (24 per cent). 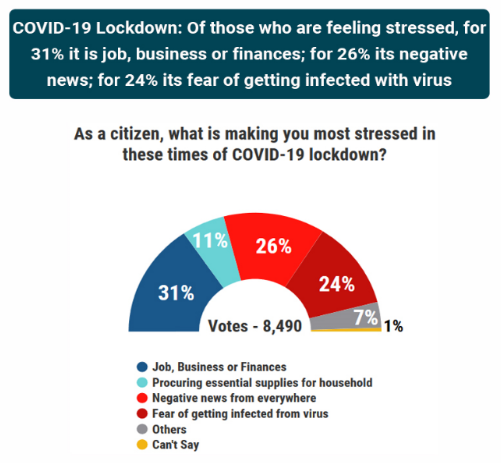 "Results of the survey show that Indians have more things to worry about and the fear of getting infected is not the biggest reason for their stress. Running the house, having a job and maintaining their business turns out to be the major reasons for stress for Indians. For 11 per cent people, the biggest source of stress was procuring essential supplies," stated the survey.

Data from National Sample Survey (NSS) and Periodic Labour Force Surveys (PLFS) suggests that about 136 million non-agricultural jobs are at immediate risk due to economic fallout of Covid-19.