Covid-19 Lockdown a Reality Check for State of IT Infrastructure of Businesses: Wipro Survey

As per 'State of IT Infrastructure 2020' report released by Wipro, about 81 per cent enterprises worldwide said they are re-skilling their existing workforce to increase digital penetration
Next Article

As businesses worldwide continue to grapple with the challenges posed by Covid-19 breakout and the ensuing lockdowns, the writing is on the wall for them—digital transformation is the key to sustenance. It is not surprising then that about 81 per cent enterprises reported they are re-skilling their existing workforce to increase digital penetration, as per ‘State of IT Infrastructure 2020’ report released by Wipro.

While over the years more and more organizations have upgraded their IT infrastructure to get future ready, the pace was still slow. But, disruption caused by Covid-19 will escalate this transformation, the report states.

“IT infrastructure in 2020 has the potential for seminal transformation. Emerging digital technologies and processes such as automation, Artificial Intelligence (AI), 5G, IoT, edge and ambient computing, DevOps, AIOps, and crowdsourcing are firing a new wave of innovation. This report shows that the IT infrastructure practice is coming to the party but not universally as it should. The COVID-19 lockdown and the ability of their IT to respond to the emerging situation was a reality check for many organizations; similar organizations operating in the same industry were faced with vastly different grades of challenges.”

The average business spends on IT are estimated to be around 3-6 per cent of total revenue, as per the report. What’s interesting is that 43 per cent respondent enterprises said their IT infrastructure spend budget is used for transforming the business, suggesting considerable scope for innovation.

The report underlines a variety of compelling reasons that are driving this increase in IT spend budget. The need to upgrade outdated infrastructure was the number one reason (75 per cent) for organizations to increase IT budgets. “The average age of IT assets in an organization is over five years, which implies that the assets are ready for a refresh or an upgrade,” the report said. Increase in digital initiatives (60 per cent) and security concerns (52 per cent) are the other two major reasons driving increase in IT budgets. 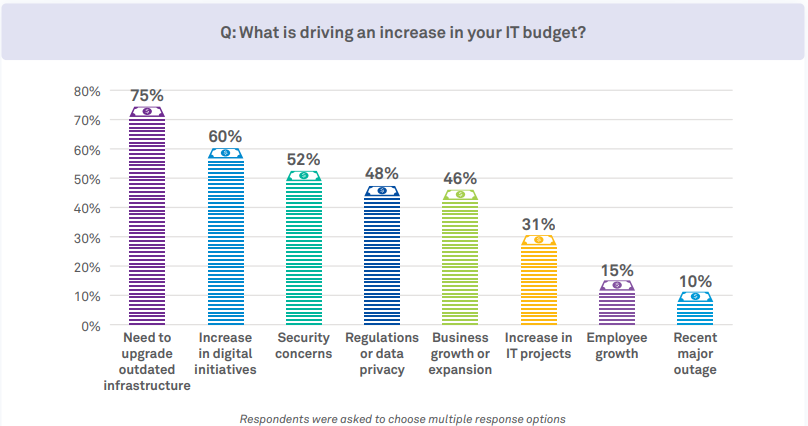 On being asked which tech areas do they plan to increase their IT spending in the next three years, data centre cloud emerged as the single-largest expense account for 79 per cent enterprises. “This is a good indication as it means IT infrastructure costs can be controlled and aligned with business needs in the future,” the report noted. About 59 per cent also plan to spend more on software and tools used for operations.

Interestingly, as much as 85 per cent of respondents said they plan to either decrease or keep spends at the same level as before for Service Desk, indicating spends on Service Desk may plateau as automation and intelligence drive support, allowing organisations to scale support without adding to costs.

If You Want to Freelance in IT, CompTIA Certification Can Open Doors

Why Job satisfaction is an Important Phenomenon of the Vicious Circle?