As per the HRD guidelines, the limits on daily screen time for online school sessions for 9-12 classes has been set at 3 hours, for classes 1-8 at 1.5 hours, pre-primary at 30 minutes with parents

The covid-19 led lockdown shifted classes held in school to online platforms. While the shift ensured that impact on student’s education is limited, it also posed new challenges and concerns for parents of students. Increased screen time and its effect on children being one such concern.

In view of this, the Ministry of Human Resources Development came out with guidelines for online classes to limit the on-screen time along with the number of sessions. However, most parents have proposed to increase the screen time limits, as per a survey conducted by community platform LocalCircles.

About 69 per cent of the 21,322 respondents to the survey oppose to the timings set by the government, proposing higher limits.

As per the HRD guidelines, the limits on daily screen time for online school sessions for 9-12 classes has been set at 3 hours, for classes 1-8 at 1.5 hours, pre-primary at 30 minutes with parents. 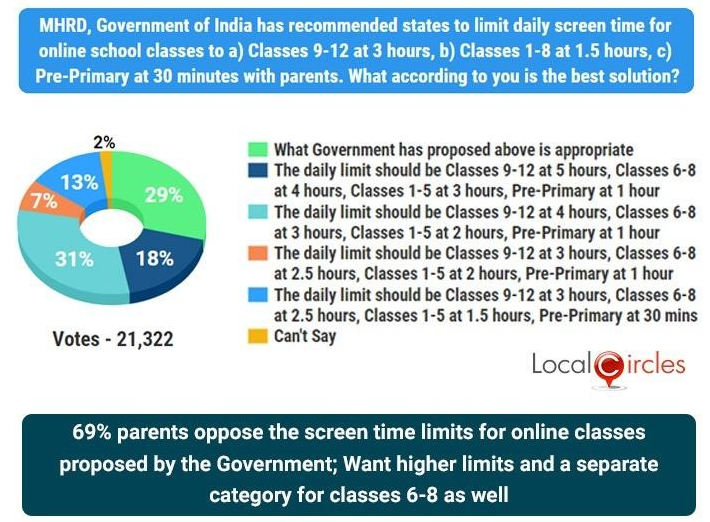 Similarly, for classes 6-8, 18 per cent parents said the optimal time limit should be four hours, 31 per cents said three hours and 2 per cent said two-and-half hours, as opposed to the one-and-half set by the government.

While the MHRD guidelines are not binding, the state governments can enforce them. “The idea behind online classes according to majority of the parents should be to cover the curriculum while ensuring that the screen time is not excessive. Some parents feel that there should be standards on how these online classes are conducted such that use of screen once the classes are over is minimized,” the survey report said.