As Covid-19 wreaked havoc on livelihoods of millions of workers, salaried individuals withdrew a whopping INR 39,402 crore from the Employee’s Provident Fund (EPF) since the first nationwide lockdown was imposed on March 25 till end of August. This data was released by the union labour ministry in the Lok Sabha this week.

The ministry further added that about 104 crore salaried workers dipped into their retirement savings during the same time period.

The government shared information with regard to withdrawals from the EPF in response to a question asked by MPs Sudheer Gupta, Benny Behanan, Srirang Appa Barne, Bidyut Baran Mahato and Sanjay Shivrao Mandlik.

Of the 24 states and union territories (UTs) whose data has been shared, Maharashtra recorded highest withdrawal of INR 7,837 crore, followed by Karnataka and Tamil Nadu (including Puducherry) at INR 5,743 crore and 4,984 crore, respectively.

These three states made up 47 per cent of the total withdrawal amount. 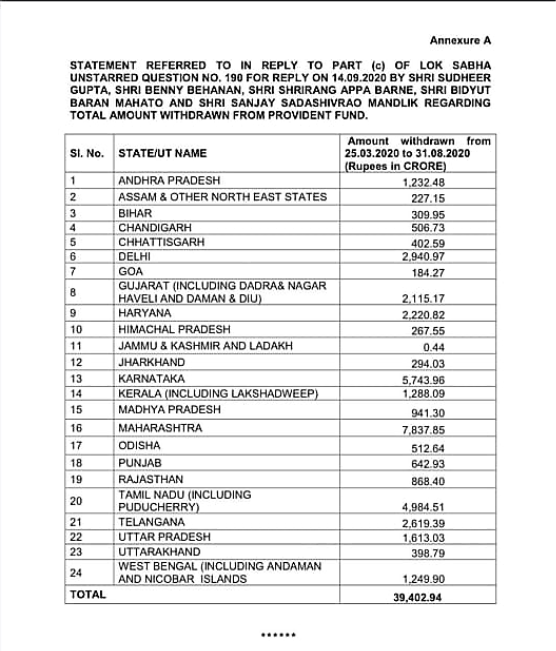 Earlier this month, EPFO announced that for the financial year 2019-20 it will pay out the 8.5 per cent interest in two installments due to the impact of Covid-19 on the retirement fund’s earnings.