When Doc Gallows and Karl Anderson's time with WWE came to an end, it was just the beginning of their multi-platform success.

Investors, take note: Current and former pro wrestlers are making moves across media and commerce. No, not just The Rock (though he's certainly doing fine for himself). Whether it's Stone Cold Steve Austin's successful segue into craft brewing and reality TV, Cody Rhodes and Frankie Kazarian's boutique line of cigars or Brie and Nikki Bella's femme-centric clothing line, there is money to be made buoying the branding efforts of sports entertainers.

That's what veteran grapplers Karl Anderson (real name: Chad Allegra) and Doc Gallows (real name: Drew Hankinson) are banking on. After they were released by industry powerhouse WWE amid Covid-related cuts earlier this year, they made two immediate calculations: Sign with a competing company that has their backs, and create a small empire of media and merchandising leveraging their personalities (think blue-collar prankster) and decades-long rapport with fans across the world. 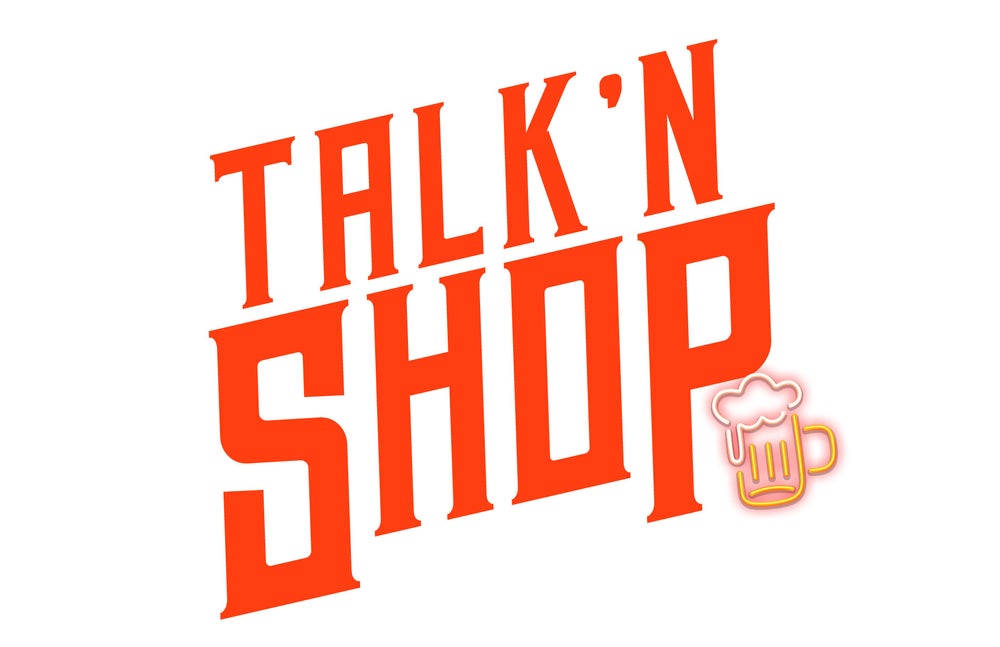 In the five months since parting ways with WWE, the duo made waves by joining the ranks of rival Impact Wrestling (which airs its namesake, flagship show on AXS TV every Tuesday at 8 p.m.), in addition to re-launching their popular Talk 'N'Shop podcast with co-host (and fellow wrestler) Rocky Romero. They aired a successful, satirical PPV event called Talk 'N Shop A Mania (a sequel is already confirned for November 13). They collaborated on Talk 'N Shop beer with Kentucky-based craft brewer Jarfly and a Talk 'N Shop bourbon with Tennessee-based Leatherwood Distillery and a line of red and white wines with Wine Savage. And finally, they're cooking up an animated series and a variety special titled Talk 'N Shop: Full Keg that's airing on AXS this Tuesday at 10 p.m.

So, how did this duo of career combatants make the quick switch to becoming serial entrepreneurs? We caught up with them over a recent Zoom chat  — Anderson (we'll stick with their onscreen surnames for the duration) from his home studio in Tampa and Gallows from his residence outside Atlanta — to get answers, along with a bit of insight into what any aspiring self-made maven can learn from their refusal to say, "I quit."

If there's one thing wrestlers understand, it's reinvention. Was this more broadly applicable to branching out in business?

Gallows: The day of that [WWE] release, I was sitting in my sauna, and I hung up the phone and I went, "Well, being bitter is what everybody expects, and I don't feel bitterness in my heart." You have to find the humor, and you have to express it through entertainment and through art. And that's where Talk 'N Shop A Mania came from, because we lost this amazing multimillion-dollar deal, so why not turn it into something that's positive for our brand? Why not make it brand-building and generate some revenue for ourselves and our company? And I'm damn proud that we were able to do that.

Anderson: That call was probably the greatest call I ever got in my life, because [we were] able to reinvent and create Talk 'N Shop A Mania and and go to Impact. And we've got Talk 'N Shop: Full Keg about to come out, and that's something that we'd been pitching to the WWE network since we started there, and they just would go, "Yeah, yeah, yeah." Now the businessman stuff is really coming out because we got Talk 'N Shop LLC, and we're getting big checks coming in for this and that, and we've got to figure out the taxes from this stuff. That's all some real shit that we've got to learn, but the business side of these last six months has been a lot of fun.

There's something to be said for not resting on one's laurels, but do you worry about pacing yourself given the learning curve?

Gallows: I don't believe you pace yourself. I believe you run at it head-on. I've watched my dad. When I was born, he was a hot-tar roofer making $8 an hour, and he's the most self-made man I've ever seen. Now he owns five businesses. And that's what they always say: "I don't know how we got here, but we'll figure out how to get out of it" when something shows up that you don't understand. We like to have a drink, but now we're in the alcohol business, and we're figuring all this out. We're figuring out liquor laws and, you know, can we ship this stuff here? And how does this work? We knew nothing about any of this. We just went, "Well, we want to have a whiskey, and we have a cool brand, and we know we're great." So there's a lot of flying by the seat of your pants. It's not always gonna be perfect, but you can't take no for an answer. No's just another question.

What made Impact the obvious choice for your "day job," as it were?

Gallows: They put together a beautiful deal for us. To sit there as performers on a show with no script when we go to the ring, and then watch a commercial for a pay-per-view that we thought up out of the blue and shot in my backyard, and they're running television commercials for us for that — that's a team I'll hitch my wagon to all day.

To your point, they've given you wide latitude to work on outside projects. How do you know when you have that kind of negotiating leverage?

Gallows: I don't think it was a leverage play. It was pretty open-ended on both sides because I think they saw that we're go-getters. We want to be Impact stars Doc Gallows and Karl Anderson doing all this stuff. Let's co-brand, let's see how big and badass we can get Impact. It's an exciting time for us wrestling-wise, but it's such an exciting time business-wise as well.

Anderson: We always were confident in our abilities over in WWE, and that was with the rug constantly being fucking pulled out. We knew that we could do what we're doing now, and Impact put trust in us. We like when people put trust in us, cause we know that we can deliver.

Wrestling also takes a hell of a cumulative toll on your body. Is a lot of this brand-building with an eye toward retiring from the ring?

Gallows: We are not counting down the days until then. We want to be out there when we're 50 if we can be. There's a chance our bodies don't hold up, so we want this brand that we're creating now to be the thing that carries us into the next thing. I have a ton of respect for guys who had to leave the business before there was social media. With all the platforms we have today, if you can really get out there and express yourself, you can build a brand. Without any internet or anything like that, a guy would get let go or he'd get hurt and drift out of the business, and there was no way to see who he was or what he was doing or for them to build a brand. These poor guys, there was no more wrestling money coming in. So you go work in a car lot or do whatever you have to do to get by, to feed your family. But I think we have a real opportunity in this generation, and for all the guys younger than us, to build your brand while you're hot, and we're going to keep pushing, keep grinding.

Anderson: We're more than wrestlers. If you walk into the Impact locker room, you'd think that we just were there to hang out with the boys and try to make them laugh. We like to entertain. We want to have a radio show, like Howard Stern-esque. That's the ultimate goal. You can do that until you're 80, right? Fuck it.

People point to The Rock or John Cena as a model for crossing over from wrestling, but in your case I think of Steve Austin, who specifically legitimized himself in the beverage space and has a robust podcast presence.

Gallows: We had a great time when we did his podcast when we were in WWE, but it would be a much different conversation now. I bet he went through what we're going through. We're on the road less than we've ever been on the road in our 18 years, but my day is full of Zoom calls and meetings with everybody from the government to liquor distributors to cartoon creators to merchandise creators, to movie producers — whatever we can come up with to push this brand further. We went from bumping and feeding four days a week to being businessmen. I just get to do it from my own house and I don't have to wear a tie, but I feel like I've got the schedule of my dad now. [Laughs.]

Is there nuance to the business side of wrestling that the layperson may not appreciate?
Anderson: When we recorded Talk 'N Shop A Mania 2, you've gotta book all these flights, you've gotta produce every single segment. Gallows knows about all this.

Gallows: Well, it's negotiation. [We're] on the other side of the negotiation, because now you play the role of the promoter. It's how do we market this? It's OK, this budget is growing, so how do we offset that with a [PPV] buy rate? Part of my Impact deal was I have an independent promotion here in Georgia, and we put shows on [digital-subscription service] Impact Plus. And we've been running these socially distanced shows around here through the pandemic. We follow CDC guidelines, and there's temperature checks and the questionnaire, so you have to manage all that, but then you have a full talent budget. There a lot of things that are different on the level of pretty much every other company in wrestling other than WWE, because WWE's not a live-event company anymore. They're a media company. But anybody who's not reached that level, the live-event portion is a lot of it. If I don't have a gate here, then I'm probably not gonna run the show. I love our sponsors and they help out, but that's the other end of it. So it's managing a budget more than anything and figuring out how to market that with what you have to yield the biggest return. It's not like you can go to wrestling-promoter college, so it's been a lot of fun figuring that stuff out.

You mentioned before that nothing's perfect. Are you prepared for the fact that one or more of your ideas may not sustain?

Gallows: It's inevitable that's going to happen. All you do is you adapt and move on and find the next thing. I think the good thing about us is we have so many irons in the fire. If something falls off, the rest of it's gonna pick it right back up.

Anderson: I'm not gonna lie: I was kind of ready to rest on my laurels and just collect that massive check from WWE. And so when we finally did leave it gave me a nice slap in the face and got me ready to jump back into this business world.

Gallows: There's a lot to what we've got going on, and hopefully those of you who aren't wrestling fans will know of us sooner rather than later.