When you look back to history, you can feel more optimistic about our future.

By Jason Feifer Updated: January 9, 2021
Opinions expressed by Entrepreneur contributors are their own.

As we enter this new year, full of hope and trepidation and the scars of 2020, I thought it would be helpful to see what people from a full century ago envisioned for us. They’d recently survived World War I and the Spanish Flu of 1918, and they were witnessing a technological revolution. Electricity, commercial aviation, radio, and many other innovations were new. How, they wondered, would these things transform their world?

To find out, I searched for the phrase “the year 2021” in the newspapers of 1921. Articles of the day were full of predictions—some right, and some very wrong.

The mistakes are intriguing, of course. (For example, the Evening News of Harrisburg, PA, predicted that Mexico will be “a greater power than any in Europe.”) But I prefer the correct predictions. The people of 1921 imagined fanciful conveniences that today we take for granted—like controlling the temperature in our homes, cooking more easily, and flying around the world. These were fantasies of theirs! And they’re our reality.

It should make us think: For all the real hardships we face, we are also living in someone else’s dream world… and we now get to build towards our own future dreams.

Here are some of the predictions I found.

1. We Will Be Masters of Temperature 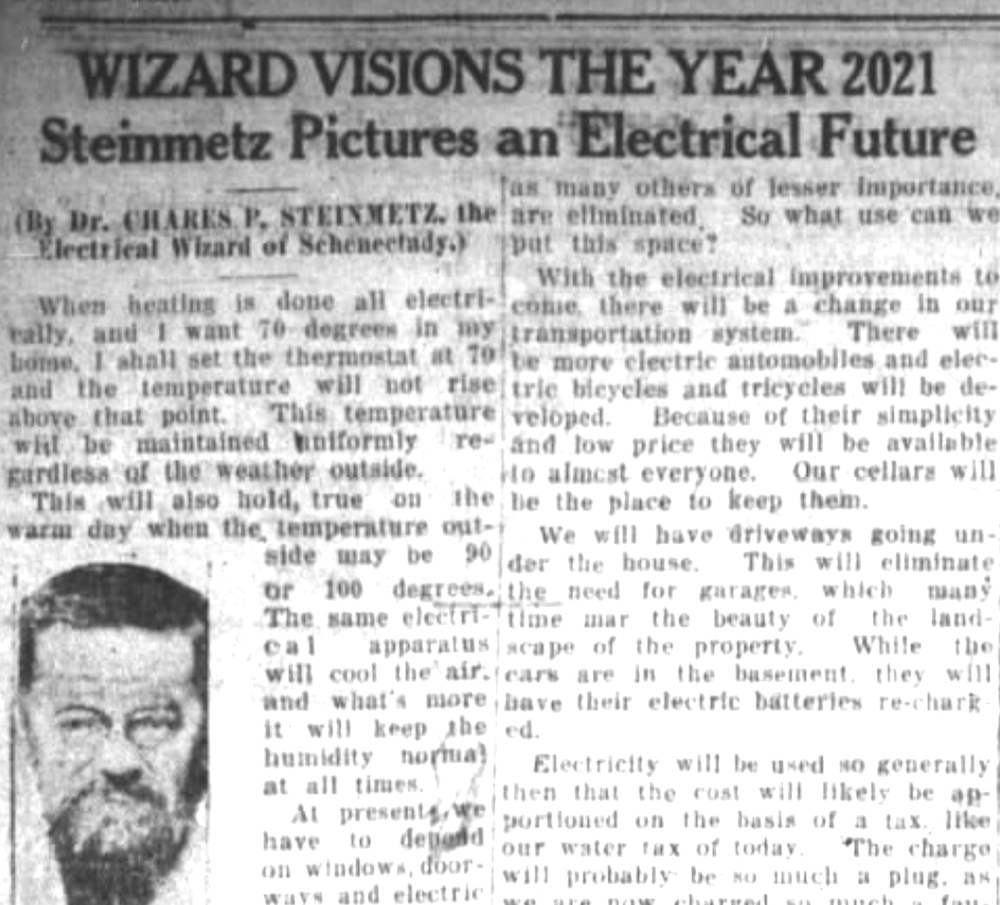 Charles Steinmetz, an electrical engineer known as “The Wizard of Schenectady”, wrote a piece that was widely distributed at the time. He began by talking about a revolution in home environments:

“When heating is done all electrically, and I want 70 degrees in my home, I shall set the thermostat at 70 and the temperature will not rise above that point. This temperature will be maintained uniformly regardless of the weather outside.

“This will also hold true on the warm day when the temperature outside may be 90 or 100 degrees. The same electrical apparatus will cool the air. And what’s more, it will keep the humidity normal at all times.”

2. Entertainment Will Happen At Home

Steinmetz was ready to Netflix and chill. Here’s what he imagined:

“There will be no need to go to some congested, poorly ventilated hall for a musical concert. We just push a plug into a base receptacle, as we do for the vacuum cleaner or table lamp, and we can have the concert brought into our homes.

“Music will be supplied by a central station and distributed to subscribers by wire, just as we get our telephone service today. Perhaps this may be by wireless, the home being equipped with a radio-receiving apparatus. With this arrangement improved, we may hear grand opera stars as they sing in European capitals while sitting in our libraries at home.”

Steinmetz saw the future of electric transportation, but we’re still catching up to it. Here he imagines Tesla cars and Lime scooters… and a storage solution we haven’t quite adopted yet.

“The most essential purpose of the cellar today is a satisfactory place to house the heating furnace, the coal supply and ashes. With the home electrical, these two purposes, as well as many others of lesser importance are eliminated. So what use can we put this space?

“With the electrical improvements to come, there will be a change in our transportation system. There will be more electric automobiles and electric bicycles and tricycles will be developed. Because of their simplicity and low price they will be available to almost everyone. Our cellars will be the place to keep them. “

In August of 1921, the Miami News ran a column by Moses Folsom called “One Hundred Years From Now”. Among his great predictions: He described what’s essentially the audio book.

“By 2021 the phonographic principle may have become practically infallible and the best books will be reproduced in plates for use in many different styles of speaking machines. The exact tones of the elocutionist in speaking the words of the dramatist, poet, teacher, philosopher and novelist will be imitated in the library or parlor of every home. The exact tones of the sweet singer will also be faithfully reproduced on records to last long after the voice of the singer is silent in the sleep that knows no waking.”

That same Miami News writer rattled off some big predictions—some of which came true, and some of which (like eco-conscious manufacturing) we’re still working towards.

“Moving sidewalks and elevators may be found in the densely populated cities, and tubes may connect cities and men travel in them at a speed that is dazzling to the senses. Colored photography will be a fact and vast improvements made in movie pictures. The tides may be used for power as well as the rays of the sun for heat and power.

“Utensils and dwellings will be manufactured largely of pulps and cements so as to utilize vegetation and stone in every stage of decade, ordinary waste or unfitness.”

6. Oceans Are No Obstacle!

In Fall River, Massachusetts, the local newspaper invited schoolchildren to write in with their predictions. Some predicted police officers flying in the skies, or potatoes growing in the streets. But the best entry, by 14-year-old Thomas Gooley, imagined a person from 1921 waking up in 2021, being alarmed to find massive airplanes ahead and no doors on buildings (because they’re all now on the roof), and then trying to escape to Europe. He wrote:

“On reaching the wharf we would ask for a ticket for a first class cabin passage on the next boat. The ticket seller would laugh at us and say, ‘You do not go over the Atlantic any more, old man, but under it in a tunnel.’”

“Looking stupidly about us we might ask, ‘Well what year is this anyhow?’ And somebody might answer: ‘The year of 2021.’”

Of course, we don’t travel in tunnels under the Atlantic in 2021. But young Thomas Gooley was basically right: Boats are no longer the primary way to cross an ocean… and we do, in fact, have some kind of tunnel across the ocean. The internet travels using hair-thin wires, that are strung across the ocean floor.

Hey, history fans! Want more about how the past has shaped us? Subscribe to my podcast, Build For Tomorrow.