Why Are Indian Startups On an ESOP Buyback Spree

Benefits of liquidity events like ESOP buybacks are not limited to employees, there is value for companies too

By Shipra Singh May 10, 2021
You're reading Entrepreneur India, an international franchise of Entrepreneur Media.

Among the many things that kept the Indian startup ecosystem in headlines in the last one year is ESOP buybacks. Startups across sectors are on a ESOP or employee stock ownership program buyback spree at a time when the Covid-19 pandemic has disrupted bottom-lines for some startups while led to unprecedented growth for others.

While ESOPs found their way into compensation packages offered by new-age tech startups several years ago, opportunities for employees to realise their actual value started mushrooming only recently with companies giving them a chance to liquidate their holdings through buyback events.

The trend was kicked off by e-commerce giant Flipkart in 2018 when the company announced a 100 per cent buyback of vested ESOPs. Since then, close to 23 startups have facilitated buyback programs, with some having carried multiple rounds. Of these, maximum buybacks have happened in the last one year since the Covid-19 pandemic outbreak (see: The Indian Startups ESOP Splurge).

Was the timing intentional? Entrepreneur India spoke to startups to find out.

Significance of ESOPs For Companies

Through ESOPs, an employer issues a certain number of shares of the company to its qualifying employees. ESOPs usually get allocated at the time of hiring, as part of the appraisal or during reward programs and typically come with a vested period within which the employee cannot sell her shares.

Once the vesting period is over, the company facilitates a buyback exercise to enable its employees to liquidate their shares and create wealth. A company can buy back the shares periodically or all at once.

The benefits of ESOPs are not limited to just the employees. For employers, the idea is to give employees ownership interest in a company. As the company will grow, so will the value of its share and this concept of future gains can instill ownership in employees and motivate them to take charge and work towards building the company than just fulfill their targets.

“ESOPs align incentives of founders, investors, and employees for the long term,” said Amrit Acharya, CEO and co-founder, Zetwerk, a Bangalore-based manufacturer of capital and consumer goods. “ESOPs make the whole proposition of working with a company far more attractive as it comes with the opportunity to be part of its growth story as its co-owner and shareholder.”

Nithin Kamath, founder and CEO, Zerodha believes ESOP is the best way for employers to enable employees to participate in the growth of the company. The discount brokerage firm had completed its ESOP buyback in September last year, which allowed its current employees to sell 50 per cent of all vested stock options and paid out about INR 60-65 crore to 700 employees. 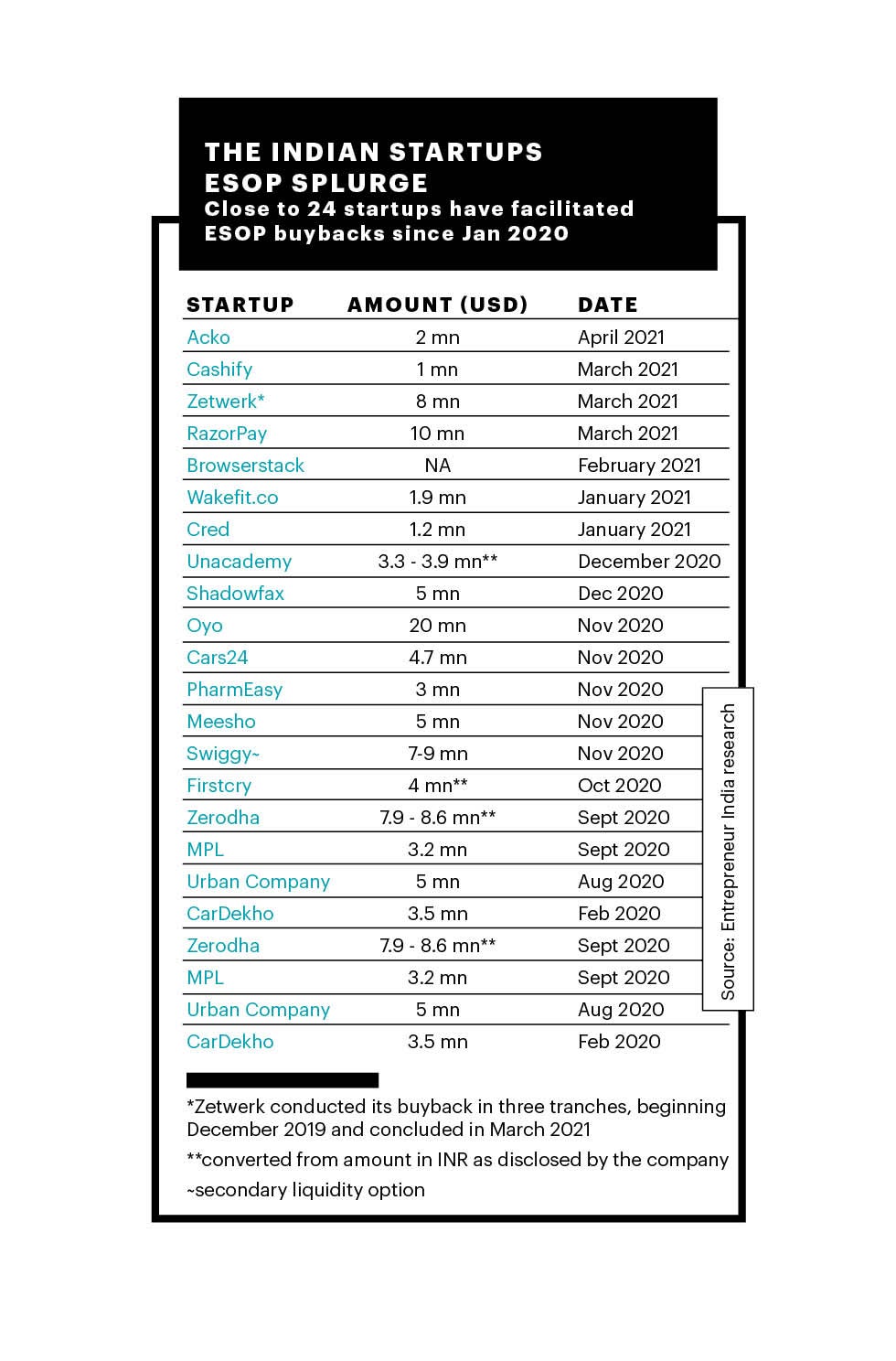 One reason for startups to use ESOPs is to attract talent when giving out high salaries is not an affordable option for them. While early-stage companies may use it for employees across positions, growth-stage companies typically use it for compensating senior leadership and top employees during hiring as well as for retention. “We use ESOPs as an instrument to attract and retain top talent," said Abhiraj Singh Bhal, Co-Founder, Urban Company.

But, do ESOP grants really impact talent retention in the current job market where jumping jobs frequently is a common practise among tech professionals?

While it is definitely an effective way, work culture is the most important factor, as per Kamath. “It is all about culture fit and building the right culture and work environment that includes learning, growth, ownership of products.”

Vidit Aatrey, CEO and co-Founder, Meesho, a social commerce platform, believes ESOP announcements always help to show the confidence different stakeholders have on the growth of the company. “It does have an impact while attracting new and unique talent, and aids in building the ‘right’ team for any company.”

Meesho implemented two rounds of ESOP buybacks last year totalling to about USD 5 million (about INR 37 crore). All employees ranging from junior most executives to senior leadership took part in the exercise where the eligible employees were entitled to exercise their option to sell up to 100 per cent of their vested ESOP shares. Meesho quoted ESOP buyback as a way to acknowledge and reward their employees’ efforts in growing the company 4X compared to pre-COVID levels.

Of the several buybacks that happened in the last 12 months, repurchasing the shares as a reward system at the back of the business’s  growth amidst the Covid-19 pandemic is a common reason for many. For instance, Nakul Aggarwal, CTO and co-founder of BrowserStack, said their ESOP buyback in February this year was a way to reward their employees through a wealth-creation opportunity after the company posted strong growth during the Covid-19 pandemic.

“It underlines our commitment to sharing the growth and success of the company with our employees,” said Aggarwal, adding that they intend to do this regularly as their business is profitable and growing well.

Zerodha is another case in point. “2020 was the 10 year anniversary of Zerodha and also happened to be a great year in terms of activity and growth of the business, said Kamath.

Meesho, on the other hand, facilitated the buyback to compensate their employees in place of cash appraisal last year.

The slew of secondary sales and buybacks in the recent past by some of the marquee startups, such as Unacademy, Cred, Razorpay, MPL and Shadowfax, will help raise awareness among workers about the monetary value proposition of ESOPs in compensation packages. This, in turn, could also help companies in reducing employee churn as more employees are likely to stay with the company for longer to cash in on their holdings.

“Typically, ESOPs liquidate at the time of IPO or an acquisition. An interim buyback allows employees to not have to wait for these milestones and gauge the market value of these instruments tangibly,” said Acharya. Zetwerk started share buyback with its Series B fundraise in December 2019 and has done three tranches worth USD 8.3 million (about INR 60.92 crore) spread over six months. The liquidation process also enabled exits for Zetwerk’s early-stage investors.