Kara DioGuardi Knows How Songwriters and the Music Industry Can Survive

Kara DioGuardi has seen it all in her industry but hasn't traveled that far from where she started. The Grammy-nominated songwriter, talent-spotter, former American Idol judge and owner of boutique music-publishing company Arthouse Entertainment grew up as the creatively oriented daughter of a CPA-turned-Congressman dad and politically active book-publisher mom in suburban New Rochelle, N.Y. Now, she lives just 12 miles away up I-95 in Greenwich, Conn.

Her two-plus-decade track record — featuring co-writing credits for the likes of Gwen Stefani and Pink and the development of Arthouse up-and-comers including Ingrid Andress and Jon Bellion, the latter of whom contributed to Justin Bieber's latest LP — has allowed her certain trappings of success. But DioGuardi insists she's resolutely focused on scrappy young songwriters rising through the ranks and how to provide a network of peer- and mentor-support to make sure no diamond gets left in the rough.

In addition to Arthouse, which she founded in 2001 with business partner Stephen Finfer, DioGuardi launched a nonprofit five years ago named Inspired Nation that, in its own words, "aims to build a bridge between the talent and dreams of our youth and their hope for a better, more inspired world." In execution, that means setting out to "redefine vocal competitions not just as a way to celebrate talent, but as a conduit for youth appreciation and community activism." (She is also incubating a forthcoming artist-connectivity app called Briidge.) 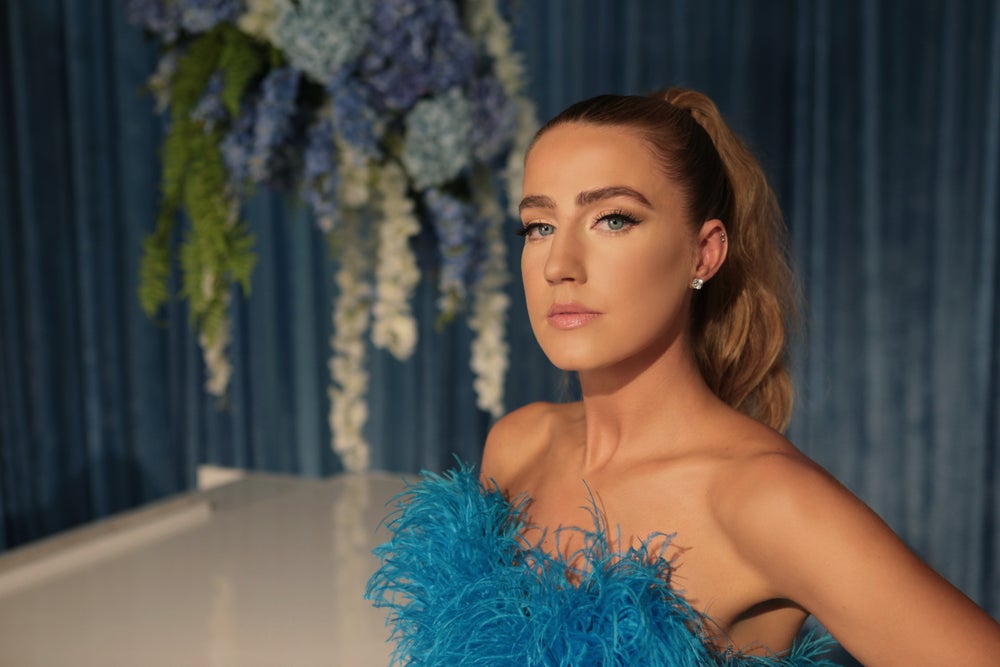 Ingrid Andress is one of the young artists DioGuardi has helped develop.
Image credit: Lauren Dunn

So, how has DioGuardi weathered the past 20 years of hyper-evolution in her industry and, more acutely, a year-and-change of pandemic disruptions to the music business as usual? In a phone conversation from her aforementioned home in Connecticut, the ex-Idol gatekeeper spoke about removing barriers between artists and their aspirations and how contemporary songwriters — and not creaky record-label conglomerates — hold all the cards.

The music-industry landscape sure is ever-changing, isn't it?

It sure is. It's changing faster than I think most people know what to do with, and the changes are fast and widespread. It's been a long time coming. There are all these changes that are pushing the music business into this technological era. We have these new metrics that are telling us what artists are emerging and what groups certain artists are connecting with, and all this new information is helping us choose talent for the future.

The music business has always been slow about looking at technology to inform decisions for the future. They've never really partnered with technology companies. What I find frustrating sometimes with the music industry is we create these products, but they're done by music people and not technology people. I think the key for us to really survive as an industry is to look towards the best and brightest technological partners to guide us into the kind of apps and artificial intelligence we need to inform decisions.

In effect, the music industry can determine the inevitability of its own obsolescence.

Exactly. Some of the major [record labels] have bought up these companies that help distribute music online, but when TikTok arrived, it had been going on in Asia for years. It was no secret, you know? And then all of a sudden, it's here, and A&R [artists and repertoire] people are looking at it like, "OK, we've got to get [our artists] on TikTok!" That can't be our strategy. We need to be way more proactive than that.

Is this new Briidge app you're developing exemplary of that kind of forward-looking approach?

Briidge is for songwriters, which is not a huge market, but it's the market I'm interested in. It's an app that will pair you with other songwriters worldwide, but it's not just based on your skillset. It's based on sort of a survey developed by psychologists that really focuses on your personality, your work habits. It's not like you can just put any two people together. I mean, there's a whole industry [of A&R reps] in the publishing world that puts people together, but if you could have this AI that is virtually working 24-7 pairing people, it would help them grow faster, because they would have access to all these writers they'd never met. They'd feel a sense of community. And really, why shouldn't they be able to break down the barriers of the industry and geography and the financial ramifications of having to travel everywhere to meet people?

Does this leave room for young songwriters and performers who are bit more technology-shy and have romanticized the idea of more grassroots gigs and networking?

Nothing can replace that. I'm absolutely for getting out in front of the public playing gigs. That's where you really grow in terms of your performance and how you decide to present yourself to people. That's something that will go on forever. I think even if you're doing virtual concerts, you still have to have confidence and an ability to create a show.

I was about to say that most musicians can't do in-person shows right now anyway, so something's gotta give.

Right. They can't do that. But what they can do is meet other creatives like them who are in the same boat and feel like they're part of something bigger. I can still feel someone through a computer. I would rather have them there than not have them at all. So, if somebody is in Sweden and I want to write with them, at least I can develop a relationship with them online. And not only that, I can work on something during the day and then send it to them, and by the time I wake up it's done.

That kind of tech-enabled long-distance collaboration has been going on somewhat primitively since at least the band The Postal Service. But now it sounds like it can be an essential tool.

Absolutely. It gives artists the power to connect with each other. With [Briidge], you rate the co-writes, so then it will further refine who you pair with. So if you're like, "Eh, the lyrics didn't work out like I expected," it'll actually allow you to create new filters.

And in this virtually communal vision of the future, are artists able to protect the integrity of their original work?

Yeah, it lends itself to blockchain and smart contracts and possibly NFTs down the road, because a lot of them will be new and unpublished writers. But even in my work at Arthouse, because the people we sign have nothing out there, the only way they get better is by putting them in the room with [collaborators], and they'll write hundreds, sometimes thousands of songs before anything happens. That's the way they get better. That's their schooling.

Has the disruption to so many traditional revenue streams for performing musicians brought more unsolicited talent knocking at your door about publishing deals?

It's kind of two-fold. If you're an up-and-coming artist, you own your masters and you can put things on Spotify and create a fan base. You can actually start making some money, because the master side will make you some money. So, it's really forced people to become very savvy with marketing themselves on the web and through these digital service providers. It's actually forced them to connect with their fans. That's why TikTok kind of went off the charts. It was this great way for kids who wanted to put music out to not only do that, but to connect with their fans by showing a side of their personality. Or showing the beginnings of a song and asking other people to say, "Give me a line, I'll write you a song." Creating a fan base is valuable. You can monetize that maybe even more than you could in a gig where you were making $50 for the night at a coffee shop.

The second part is that it's forced a lot of people to also write more in the sense that they may not have the face-to-face connection, but it's really easy to jump around and do one thing in the morning with somebody else, and then jump out in the afternoon and finish up a song you started three days ago. It's very efficient. I also think a lot of songs have been written during the pandemic because it's easy to jump on a Zoom for a few hours to finish something up, record it and then jump back on the zoom.

Is that how you're scouting talent now? Seeing who surfaces from this subculture?

I don't know that I'm finding people through Spotify and TikTok, because everyone else is looking there. I'm looking very early, before they're having those moments. That's kind of my specialty. That's where I found Jon Bellion and Ingrid Andress. They didn't have these big fan bases. The metrics weren't there. So, my model with this iteration of Arthouse has been raw talent that not everyone in the music industry can see or not that not everyone in the music industry wants to invest in because it's too early. For me, that's the joy.

By offering your personal mentorship and opening up a peer network, are you helping new songwriters avoid falling under the sway of the kind of predatory svengali that used to be so commonplace?

Yeah, I don't subscribe to that. I try to sign young artists and create a community around them of people who I think will mentor them. I can mentor them in one way, and then somebody else gives them something else. It's like raising a kid — it takes a village. I don't want to be the only person in their lives, because they're not going to learn what they need to learn. I see the music industry through one lens, but the best advice I can give is to not say everything that I'm going to tell you is the Bible. I know a lot, but then there are people out there who know more than me, and I'm not afraid of that because my whole thing is to make you the best version of yourself as a person, artist and songwriter.

Writ large, can the music industry still nurture long-haul album artists while responding to the urgent pace of how content is manufactured and consumed?

The No. 1 thing artists and songwriters need to do is push the boundaries of what's already out there, because if you can write a song that sounds like it belongs on the radio because you're comparing it to what's on the radio, you're going to fall short. It's about embracing your uniqueness. That's what the development needs to all be working towards — finding your voice and not conforming. Now you have these amazing streaming artists who you may not hear on the radio, but they have huge fan bases because they're telling their stories in a unique way. The paradigm has shifted.