This entrepreneur, philanthropist, and politician is on a mission to help transform Egypt.
Next Article

"I always deal with every day as one step forward to reaching my endless dreams.” That’s how Ahmed Abou Hashima, founder of Egyptian Steel, Egyptian Cement, Egyptian Media, and 107 Network, describes how he goes about his tasks on a daily basis. Beyond entrepreneurship, Abou Hashima is active in philanthropy as the founder of Abou Hashima El Kheir Foundation, and in politics as the Vice President of the Republican People’s Party, a Member of The Senate, Egypt’s consultative upper house, as well as Deputy Chairman of its Industrial and Internal Trading Committee. One thing should be clear here from the outset- all of his roles require long working days, but Abou Hashima rarely feels that he “worked 15 hours continuously.” He adds, “My dreams renew my passion daily, and they make me work all day without boredom or exhaustion.”

More than a decade ago, the first of these dreams was to introduce new lifeblood into the steel industry in Egypt. Today, the result of this dream is the Egyptian Steel Group, an umbrella company for the Industrial Investment Company (IIC), operating in the field of steel plants management, and National Port Said Steel (NPSS) which run two of the largest steel plants in the regionin Beni Suef Governorate, and in Suez Governorate (Al Ain Al Sokhna). Using state-of-the-art, environment-friendly technology, the Egyptian Steel Group produces durable, high-quality steel out of its four major plants, which have a total production capacity of 2.3 million tons per year, thereby “contributing a lot to the Egyptian economy,” Abou Hashima says. “When I decided to enter the field of steel trade, I knew that it was just one step, and that my success in this field would be only the beginning of my work on a project of my dreams. Also, when I established the two plants [in Beni Suef Governorate and in Suez Governorate], developed them, and started the production, I considered it just as achieving one of my goals, but not my ultimate goal.”

Abou Hashima’s vision is for the Group to become a one-stop shop for all building materials, and one step towards this particular goal is another venture: the Egyptian Cement Group, which includes the largest building materials complex in Upper Egypt and the first in Sohag Governorate. In addition, Abou Hashima has also extensively invested in the media sector in 2016, establishing the Egyptian Media Group, a media conglomerate consisting of TV networks, print outlets and their websites, video platforms, and companies in the advertising and marketing sector. Throughout this interview, Abou Hashima will reiterate that his approach to work is one of constant creation, as he always strives for more. “After each achievement, I have always tried to quickly renew my goals, and therefore, I still have a lot to achieve,” he says. “I have more plans in mind, which I believe will lead me to new success.” 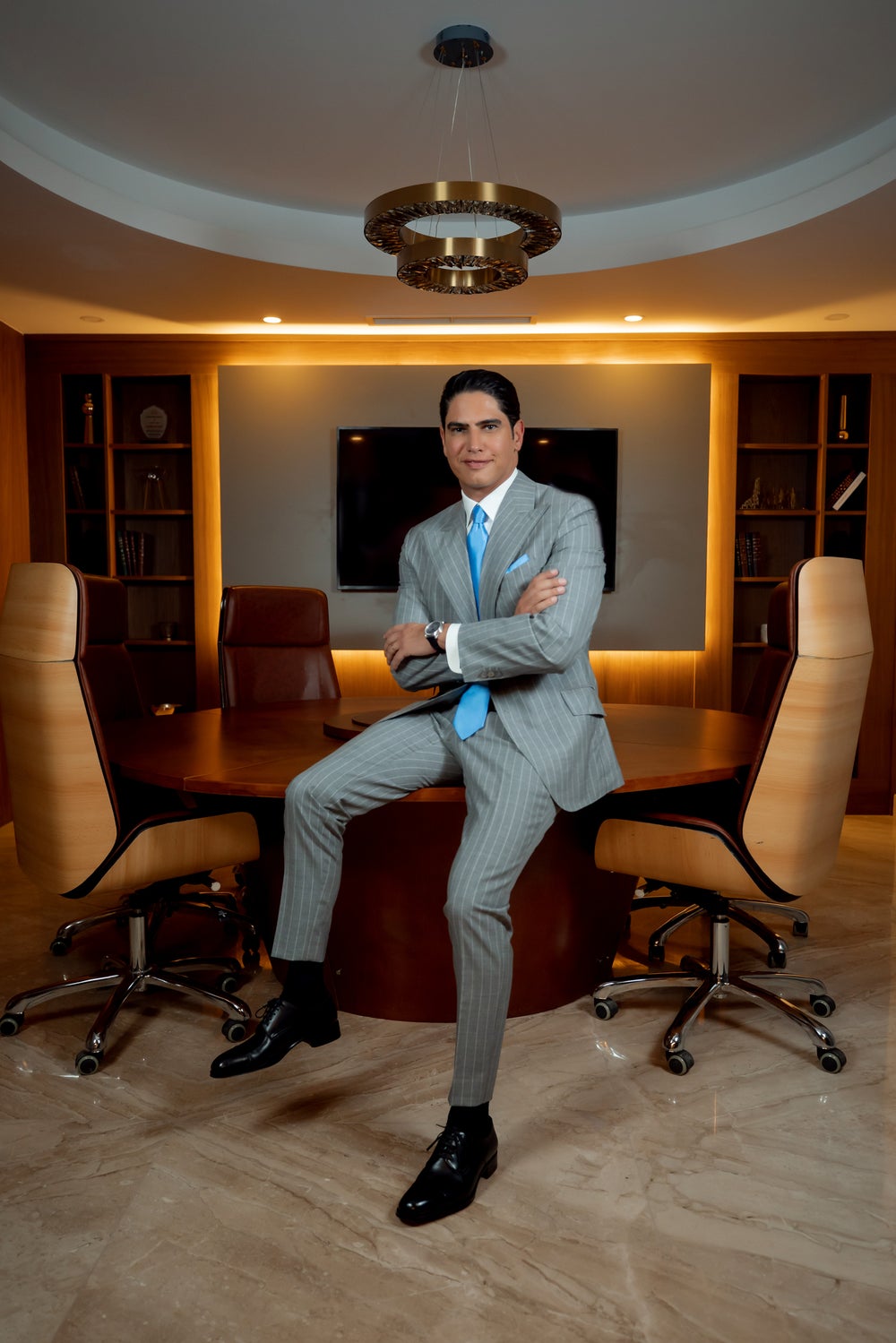 These statements are an indication of Abou Hashima’s personal philosophy, an aspirational mindset that helped him overcome difficult periods in his life and career. “When I decided to establish my own business, the term entrepreneurship was not widespread in Egypt or the Arab world,” Abou Hashima recalls. “It was neither perceived well, nor it had any kind of support from the government or society. In fact, it was not my plan to be an entrepreneur in the way it is known now, but I had a dream and an ambition to build a project of my own.” And that is the first piece of advice withthat he would like to share with young people looking to venture into entrepreneurship. “You should have a clear goal,” Abou Hashima says. “Do not be afraid of any area which you decide to enter, as long as you are confident with your feasibility study and business plan. You should be very well prepared for this project, so be familiar with the details of expenditure, profit, and loss.”

It is with the same mindset that the steel entrepreneur approaches another area he is committed to: philanthropy. While he is no stranger to being engaged with philanthropic initiatives, Abou Hashima’s passion for paying it forward was formalized in the Abou Hashima El Kheir Foundation. The foundation is engaged in various charitable initiatives, especially in the community development domain. “For a long time, I have been supporting entities that serve citizens, such as the Tahya Misr Fund, which launched the largest food convoy in the history of humanity Food Bank, the Orman Association, and other national entities helping the most needy people in Egypt. I also launched my own initiative ‘Revamping The Most Needy Villages in Egypt,’ of which I’m very proud, because we have already redeveloped more than 17 villages all over the country.”

Abou Hashima is also supporting Egypt’s positioning on the global map- for instance, in 2014, Abou Hashima sponsored the “New Egypt” campaign with an aim to promote the country’s growth potential to international investors. The campaign included various initiatives, from digital ads on the NASDAQ tower in New York, to promotional activities in Davos during the World Economic Forum. Another example of Abou Hashima supporting his country’s brand image in the world is the Egyptian Steel Group running print campaigns in Africa after the June 2013 Egyptian revolution, in order to make sure that the bond between Egypt and its fellow African countries remains strong. Meanwhile, in the field of youth development, Abou Hashima is a proud supporter of the Youth Leaders Foundation, which roams Egyptian provinces to select young, talented Egyptians who have the potential to be groomed to become the future leaders of Egypt. 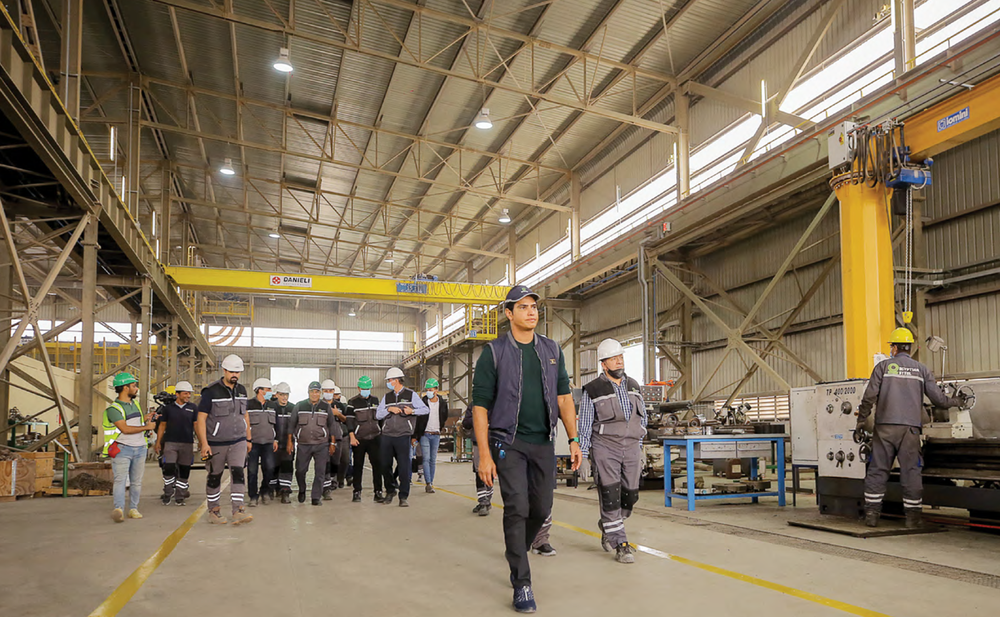 Abou Hashima is currently most inspired by his work on encouraging entrepreneurship in Egypt and beyond. In 2020, he launched the Startup Power competition, held in partnership with the Social Fund for Development for Micro, Small, and Medium Enterprises, which saw 100 Egyptian startups go through a round of seminars and training sessions, out of which 30 finalists shared an investment pie of a total of EGP2 million. “When I thought about the Startup Power competition, I went to the experts in this field, as they have a group of specialists in the field of education and training for young people, and their internationally approved courses can help young people to develop successful projects,” he explains. “I strive to pave the way for young people to transform their entrepreneurial ideas into projects that will add to our economy, especially in the field of technological development and digital transformation.”

The success of the first edition of Startup Power has inspired him to triple the value of the prizes -from EGP 2 million to EGP 6 million- for the second installment, which starts in September 2021. “I have realized that the future of Egypt and the Arab world relies on startups,” Abou Hashima says. “I participated in many conferences and forums that support the field of entrepreneurship in Egypt and the Arab world, including those held under the auspices of the Egyptian Ministers Cabinet and the League of the Arab States, and I was honored more than once for contributions to that field, although I consider it as my duty and I do not expect or deserve any recognition for that. I am just doing my role to encourage and support young people to establish their independent projects that can add to the national gross domestic product.”

It is beyond doubt that young Egyptians can learn a lot from About Hashima’s fruitful career. When asked about achievements that he himself considers particularly memorable, Abou Hashima mentions the Egyptian Steel Group developing and implementing the first of its kind environment-friendly technology in its plants in Beni Suef and Al Ain Al Sokhna. “Major international economic entities flock to see the Egyptian Steel experience in producing steel with environmentally friendly technology, and the term ‘green reconstruction’ has found more acceptance since we established these two plants,” he says. “This is something we are very proud of in Egypt and in Egyptian Steel.” He adds, “I see that the future of the region depends greatly on relying on advanced and environmentally friendly technology in all areas of industry. There is no room anymore for traditional methods of industry that waste raw materials, natural resources, and greatly affect the environment.” 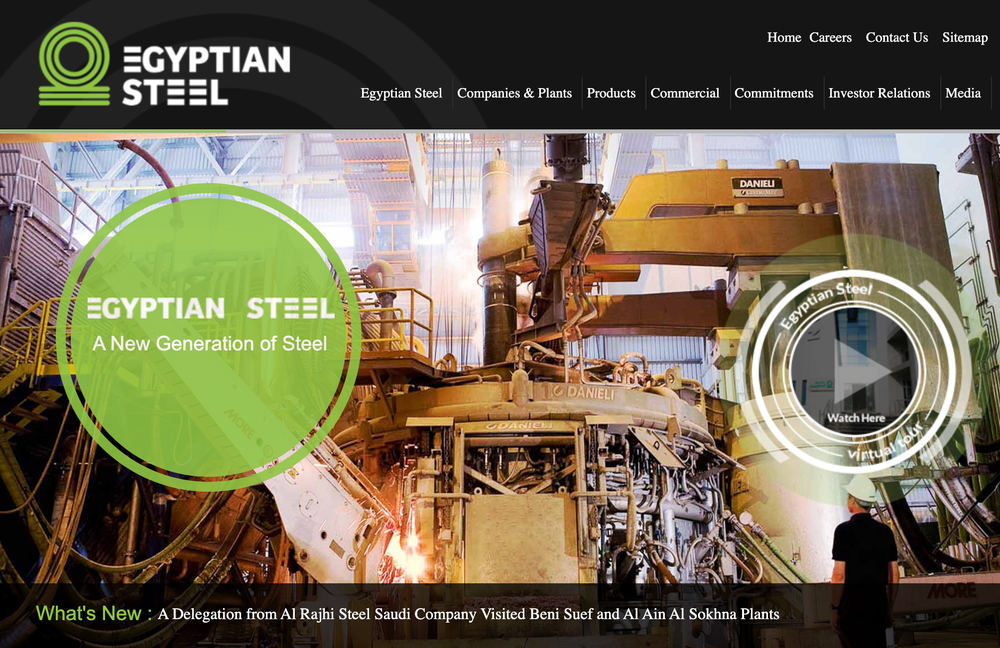 Entering politics seems as a continuation of his work to date, since Abou Hashima considers that the primary goal of any politician is only to serve his/her country, internally and externally. The decision to start his political career developed organically a few years ago. “I supported several movements after the June 30 Revolution (2013) led by young Egyptians, and although one of these movements turned into a major political party in Egypt (Nation’s Future Party), I still did not intend to enter politics, and my goal was only to support these young people,” he says. He stuck to this stance for a few years, as he was unsure about people’s perception of businessmen getting into politics- but he’s since had a change of heart.

“The economic and security situation has stabilized, thanks to the wise and strong political leadership decisions over the past few years, and in 2020, I was totally convinced that it was the right time to officially enter the political life, and to actively help the country and its economic plans,” he says. In 2020, he became the Vice President of the Republican People’s Party, a Member of the Senate and Deputy Chairman of its Industrial and Internal Trading Committee. “I chose the Republican People’s Party, because of its good reputation in the Egyptian political circles. Also, the party’s young members were a big plus that encouraged me to join the party, as they are responsible and patriotic. My ambition for my party is that it becomes one of the top two players in the Egyptian political arena, to expand its youth base, and to be well prepared for the upcoming electoral elections in order to achieve a better position among other Egyptian political parties.”

In every area of his work, Abou Hashima obviously remains a firm believer that supporting young people, especially by developing their entrepreneurial skills, is a lifeline for Egypt and other Arab countries. And that is perhaps why his advice for youth in the country is centered on ignoring the fear of failure- according to Abou Hashima, there are no real failures in the business world. “There are only economic studies that have profit and loss possibilities, but even if a loss occurs, it does not mean that you are wrong, because that is simply the nature of business in which there is profit and loss,” he explains. “When problems occur in a project, or expose you to a loss, then you should look for an exit with the least loss. The lesson learned from such situations is that you should not stop when you fall or lose. On the contrary, take it as a step that pushes you to work harder and re-evaluate the situation before embarking on any new project in order to avoid greater losses in the future.” 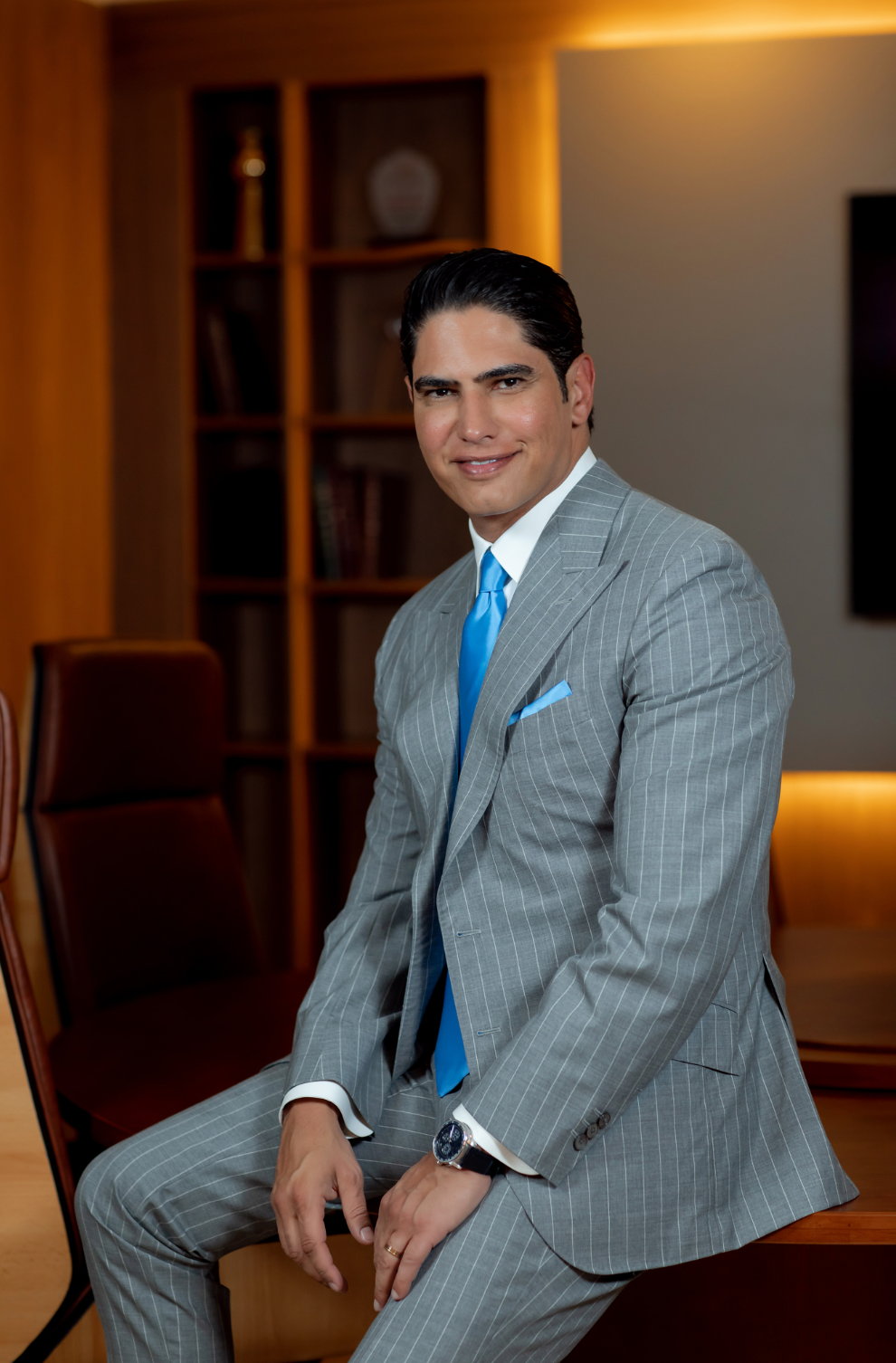 1. Make a game plan for yourself “Set specific goals, and determine the steps to achieve each of them.”

2. Hurdles are part of the journey- just run with them “Do not hurry to succeed, and do not worry about mistakes- but correct them quickly, and continue working towards your goal.”

3. Get people to back you (and your vision) up “Build a team who have the same ambitions and goals as you do, and who are loyal to the idea, before the person.”

4. Stay humble, stay focused “Renew your ambitions regularly, and don’t be deceived by false success, because vanity, arrogance, and narcissism can kill any idea, project, or business.”