Is This Network a New Dawn For Blockchain?

Bob Ras of Sologenic says Coreum is meant to solve and improve many weaknesses in current blockchain networks, as well as provide developers with a key infrastructure to construct any decentralized app

By Srivatsa KR February 2, 2022
Opinions expressed by Entrepreneur contributors are their own.
You're reading Entrepreneur Asia Pacific, an international franchise of Entrepreneur Media.

On December 20, Sologenic co-founder and CEO, Bob Ras, announced the upcoming launch of their new blockchain network, Coreum. Ras and Sologenic say Coreum is meant to solve and improve many weaknesses in current blockchain networks, as well as provide developers with a key infrastructure to construct any decentralized app.

“Most of the existing blockchains have been unable to meet the expectations of the financial institutions to be widely adopted. Coreum improves most current issues and offers fast and low-cost transactions while providing cross-chain support and smart contracts to build almost any d’App within the DeFi, Banking, Metaverse, and even Gaming!” said Bob Ras, co-creator of Sologenic and Coreum.

If true, Coreum could prove a significant competitor to long-established blockchains like Ethereum, as users have grown increasingly vexed by deficiencies in crypto's penultimate network. Though Ethereum has proved a great technology and a crypto pioneer, its lack of a natively scalable infrastructure has incurred surging transaction fees and slow processing rates, while its proof-of-work model yields far too much energy consumption to be broadly accepted into an environmentally-conscious future. The Sologenic Development Foundation, responsible for the Sologenic Asset Tokenization ecosystem, DEX, and a new NFT marketplace, attests that Coreum solves such flaws, among others, with efficient, secure, fast, and sustainable transaction processing, as well as a fresh consensus mechanism that produces a much lower carbon footprint.

With increasing dApps and thousands of crypto users looking to capitalize on the emerging NFT craze, Ethereum and other blockchains are crippling under the weight of heavy network loads. For Ethereum, this has led to major issues in scalability and inflation, as the network provides a sluggish 14-second block time and merely five transactions per second. The defect became especially apparent last September, when users reportedly spent thirty times the set price of TIME Magazine's NFTs as a result of Ethereum's soaring gas fees. 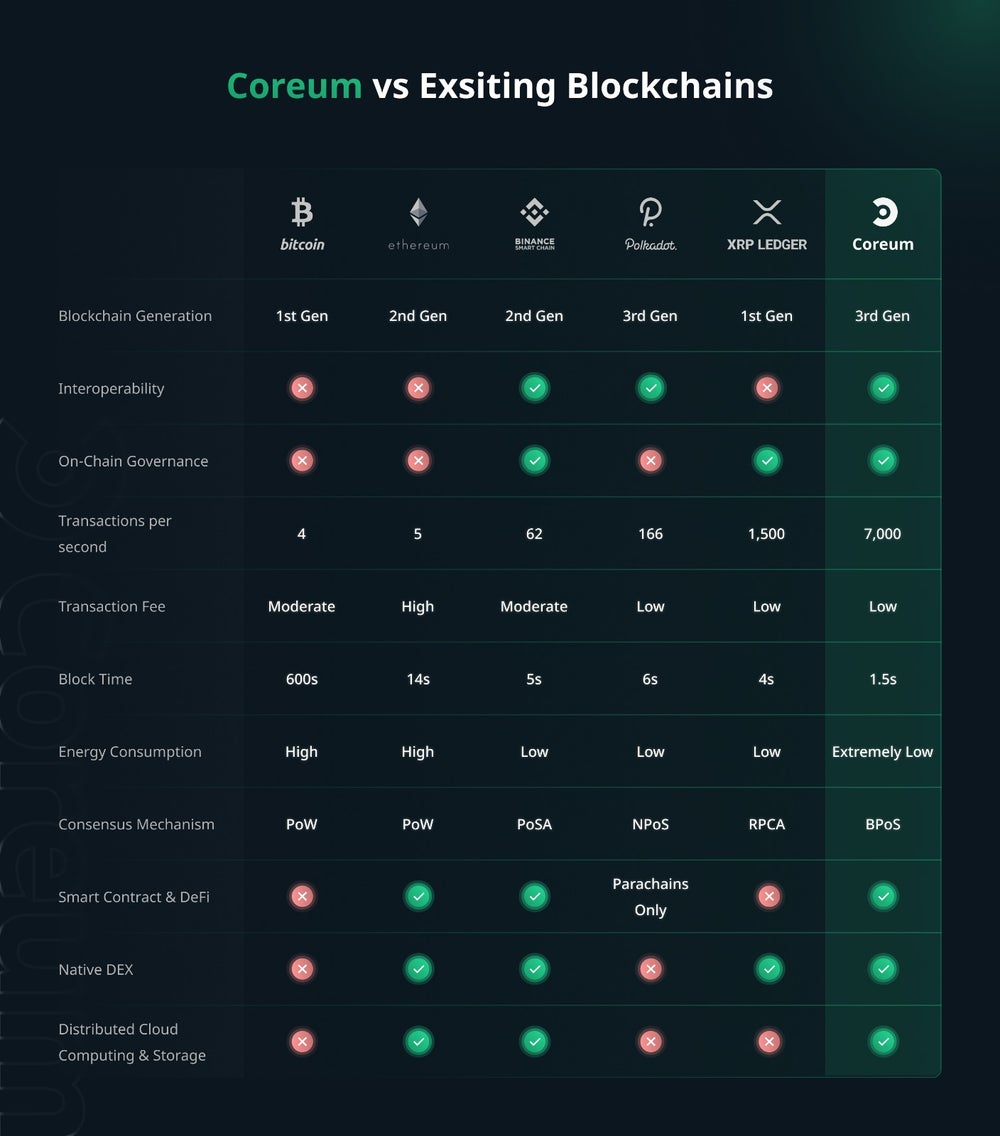 Coreum attempts to remediate these variables with a natively scalable infrastructure that features a block time of just 1.5 seconds and a processing rate of up to 7,000 transactions per second. To sustain an optimal economy during heavy network loads, it uses a stable fee model which maintains the transaction fee irrespective of block size or activity. Each block produces a dynamic ratio of fees purposed to incentivize nine, federated validators who process transactions on a four-hour rotation. When network traffic is high, transaction fees directly incentivize those validators. When network traffic is low, they replenish a rewards pool that also fills with excess fees during heavy loads. Balancing both stable transaction fees and incentivized validators conceptually renders a deflationary economy similar to Bitcoin and Solana.

The blockchain’s nine rotating validators comprise its Bonded Proof-of-Stake consensus mechanism, a more streamlined, energy-saving alternative to Proof-of-Work that many crypto platforms are now adopting. Though BPoS has yet to face large-scale implementation, the protocol affords scalability enhancement without reduced security or decentralization. For Coreum, it randomly delegates mining power to avoid the centralized mining pools afflicting Ethereum and enables Slashing, Staking, non-custodial Delegating, and on-chain governance to maintain security. And since BPoS forgoes a competition-based model that demands ever-greater computing power, Coreum reportedly produces a 99% lower carbon footprint than Ethereum and Bitcoin.

According to SDF, Coreum is specifically designed to serve as a vital infrastructure for subsequent blockchain applications, which is why they’ve incorporated several features that they hope will push crypto closer to widescale adoption. Where Ethereum and others fail to provide data transfer across different networks, Coreum enables cross-chain interoperability. This deploys a bridge functionality that permits various chains and cryptocurrencies to seamlessly flow into its ecosystem through a collateralized wrapping, affording a wide range of potential blockchain-enabled services such as customizable Web3 services, a more decentralized ecosystem, and enhanced cross-industry collaboration.

Moreover, the cross-chain functionality yields progressive execution of the network’s Smart Contracts, which utilize the turing-complete Web Assembly engine and serve as the basis for the CORE, Coreum's native token that will be distributed to the Sologenic-Coreum community as "Airdrop" rather than through token sales or ICO. With an interoperable network, these contract applications can be written in various languages and compiled into WASM before transaction processing.

Multi-lingual contracts could accommodate extensive growth for dApps in the Coreum Ecosystem, along with grants that the network extends to qualified developers, incentivizing them to design intuitive dApps on the blockchain and challenging Ethereum’s long-standing reputation as “the mother of dApps.” Sologenic has even posited a number of suggested use-cases for Coreum, including Tokenized Securities, Decentralized Exchanges, Liquidity Providers and Market Makers, Metaverse Applications, Cross-border Payments, Banking and Remittances, NFT Marketplaces, Stablecoin Ecosystems, Gaming and Play-to-Earn Apps, Lending Platforms, and Wrapped Cryptocurrencies.

In addition to its built-in, non-custodial bridge functionality, Coreum also possesses an integrated Decentralized Exchange module with synthetic orders, native support for issuance of any fungible or non-fungible assets, and the ability for issuers to customize tokenized assets with features like wallet whistling, burning, and freezing.

As the crypto community grows increasingly frustrated with Ethereum and other platforms beset by inefficiencies, Sologenic is promising a host of potent solutions and dynamic functionalities with its third-gen layer-1 blockchain. Whether Coreum is truly poised to replace time-honored giants like Ethereum remains to be seen. But with optimized scalability, an interoperable network, incentivization for greater dApp development and extremely low energy consumption, it’s safe to say that SDF’s new network is an indication of a swiftly maturing sector.