Nio Stock Is Finding Its Stride Amid a Volatile Global Scenario

InvestorPlace - Stock Market News, Stock Advice & Trading TipsNio stock is suffering through a reversion to reality from the 2020 EV bash. It will take time, but the...

By Nicolas Chahine March 2, 2022
This story originally appeared on InvestorPlace

The electric vehicle revolution is finally happening and it is gaining momentum. The process will take decades to unfold, so the runway for the suppliers to it is long. Tesla (NASDAQ:TSLA) is setting the pace as the first mover in the segment. In the running is Nio (NYSE:NIO), which is delivering over 70,000 vehicles a year. Although NIO stock has seen its fair share of victories, it is down on its luck now.

Its highs came late in 2020, but then it fell more that 70% from $67 per share. At $21 it makes for a much more compelling investment than at the height of the mania. There will be losers in the EV revolution, but Nio is not likely one of them.

Nio Stock Is Seeking Its Stride 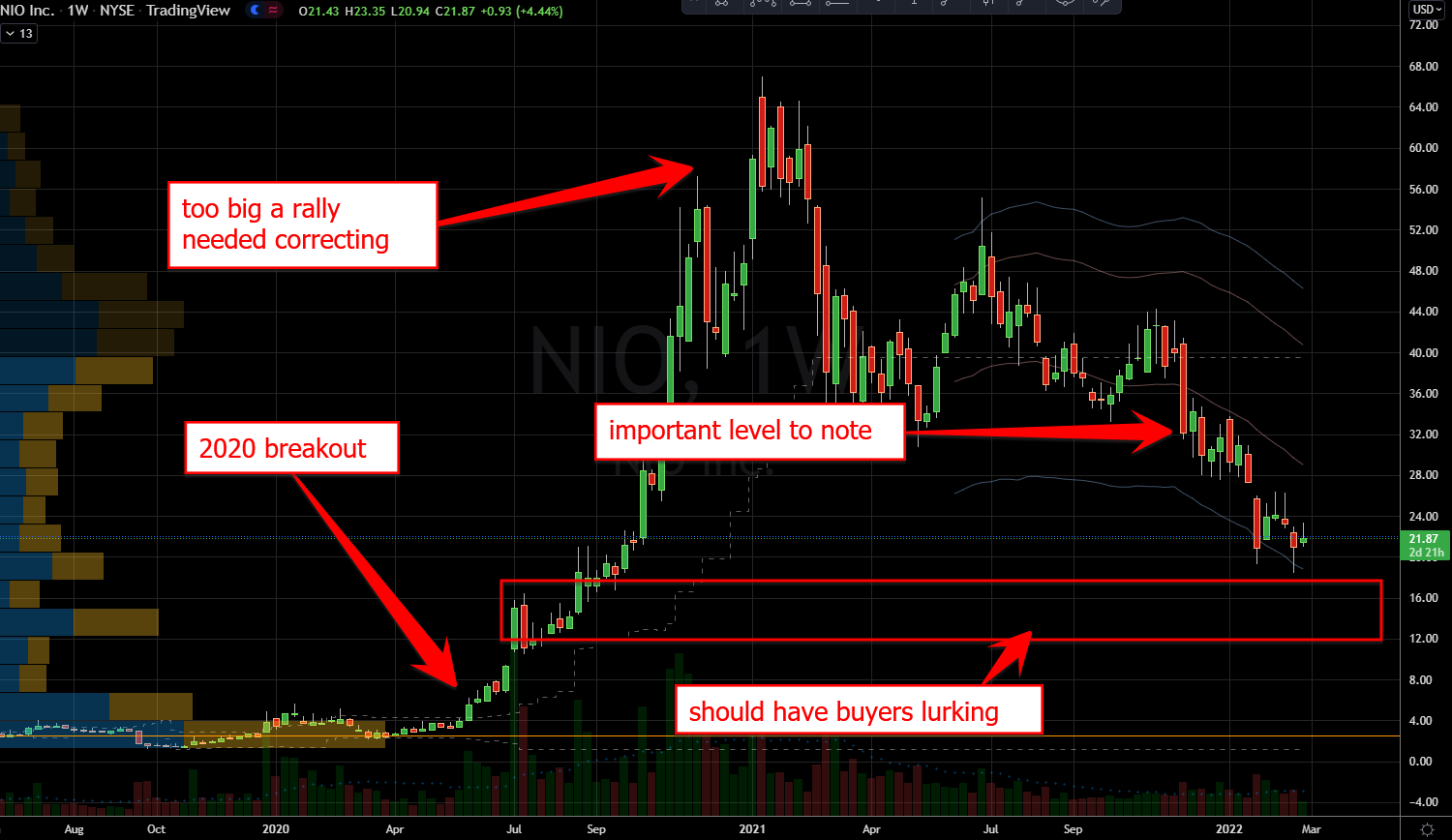 Judging by these stock performance statistics one would imagine that the fundamentals are horrible. In reality, there is absolutely nothing wrong with the management scorecards. The fundamental metrics are pretty impressive, but that is not helping the stock now. According to TradingView, Nio grew its revenues 51%, 108% and 115% in the last three years.

Such results show absolutely no deterioration in the business, so the stock price action is illogical. While NIO still carries a net loss, it shows a net positive cash from operations. In other words, it does not need to borrow to exist.

Most likely the selling now is the byproduct of having earlier unrealistic expectations. And at the source of this divergence lies the rally out of the pandemic bottom. When the world locked down, stock prices collapsed. But then in a strange turn of events, the indices rallied so hard and without much rest. The interest in EV stocks like this skyrocketed. The buyers were non-discerning and they did not care how high they took the levels.

If "what goes up must come down," then what crashes up must also crash down. The rally out of the pandemic was a crash up, and that's is the backside of that trip. While there is light at the end of the tunnel, it's not a bottom guarantee. What may have started as a sector-specific correction is now a market-wide panic. The situation in the Ukraine is extremely serious. Therefore, investors are right to be shy about being too bullish.

Smart money should invoke the Warren Buffet mantra of buying when fear is extreme. But I caution against going all-in regardless of how sound the decision may be. Speaking of which, Mr. Buffet also has his finger on the EV pulse through his investment in BYD (OTCMKTS:BYDDY).

The Risks Are Mostly Extrinsic

The easy conclusion today is that there is nothing wrong with Nio the company. The stock is simply looking to stabilize in a new and exciting industry. The swing from internal combustion (ICE) vehicles is absolutely massive. The world will need to switch producing 100 million ICE machines per year to EVs. As such, there should be no worries about competition because the only problem there is throughput. I bet that all major suppliers will sell out of every vehicle they make. Then it becomes a race to adding capacity, and Nio is doing pretty well there. So far it has remained domestic, so there is the potential of expanding abroad.

In addition to the risk of global wars, this week investors also have to deal with U.S. Federal Reserve Chair Jerome Powell testifying twice. As if that's not enough, there are several of his team mates also taking the podium at various events. This includes James Bullard from the St. Louis Fed who rattled markets in early February.

Meanwhile, Wall Street is hanging on to every bit of economic data about inflation. On Friday, the government will also release the February jobs data, which are important. The Fed is extremely sensitive to wage inflation almost more than the CPI. The expectations are lofty and the revisions have been extremely wild.

Add all this together and you get a hodgepodge of external issues plaguing all equities — not just Nio. Patient owners of the stock must be able to look past the current noise. My main hope is that the Ukraine situation comes to a peaceful end and soon. After going through a devastating pandemic, we don't need to be adding to the death toll now.

The post Nio Stock Is Finding Its Stride Amid a Volatile Global Scenario appeared first on InvestorPlace.