Al Gergawi's startup, Axis, has been accepted into the Winter 2022 startup batch of the internationally acclaimed accelerator program, Y Combinator.

By Tamara Pupic March 14, 2022
Opinions expressed by Entrepreneur contributors are their own.
You're reading Entrepreneur Middle East, an international franchise of Entrepreneur Media.

Excitement aside, pursuing a business opportunity in a new city with almost no network and limited knowledge of its inner workings can be quite overwhelming. However, Mishaal Al Gergawi, founder of Axis, a New York-based enterprise platform for accurate and instant information on countries and industries, wanted his entrepreneurial journey to unroll in that specific manner.

"Personally, I moved to New York, because I wanted to build Axis without any particular advantages that I may have had as a UAE national in Dubai," Al Gergawi says. "It was a very personal choice to experience building this business in the biggest city in the world, with little connections and zero differentiators." And now that Axis has been accepted into the Winter 2022 startup batch of the internationally acclaimed accelerator program, Y Combinator (YC), with Al Gergawi currently gearing up to present his startup at its Demo Day on March 29th to an invite-only audience of 1,500 investors and media, it's safe to say that moving to New York was the right choice. "Y Combinator is a very special place, because it's an extremely supportive and open-minded community," he says. "The only advice I can really give to other entrepreneurs is that YC is looking for people with strong conviction and defensible insights. At Axis, we'll be looking forward to raising our seed round and spending the next two years iterating on the product, building some key features, and expanding coverage to many markets and countries."

Dubai-born Al Gergawi started out his career in 2005 as an analyst at HSBC and Deutsche Bank, having earned a bachelor's degree from the American University in Dubai and an MSc in International Finance from CERAM Sophia Antipolis in France. Some years later, he joined his family's building materials business and eventually became its CEO. "I started off as an investment banker, but my career was cut short when I was pulled into a family business, during which I found time to write columns in the local papers," he says. "I enjoyed writing and quickly established myself as a voice on Dubai- related economic and social topics. I expanded my interest to the UAE, the GCC, and eventually the Middle East. By 2010, it was clear to me that I wanted to do this in a more organized fashion, so I set up The Delma Institute, a political risk consultancy in Abu Dhabi, which I ran till 2017.

Al Gergawi considers researching and writing an obligatory precondition for any entrepreneurial venture, and this habit has definitely contributed to him launching not only The Delma Institute, but also his current startup, Axis. "It's very hard to build a startup if you're not curious," he says. "Founders are not musicians, they're DJs who take seemingly unrelated insights, dynamics, and data and turn them into new concepts. In my process, I like to dig into a space in order to fully understand it, so I usually have one or two things I'm really getting into for 12 to 18 months. After that, staying up to date requires 2-3% of that effort."

Al Gergawi credits The New York Times bestseller, Atomic Habits, by James Clear for fueling his stamina to complete several of his deep dives on various topics over the years, including on Middle Eastern contemporary art and independent film (2008-2010), geopolitics of the Middle East and political Islam (2011- 2013), Russian literature (2013-2014), modern history (2015-2016), energy (2017), enterprise software as a service (SaaS) and sci-fi (2018-2020). The summaries of these learnings can be found on his Medium profile, where he's currently looking into topics relating to Web3, ranging from non-fungible tokens (NFTs) to decentralized finance (DeFi) and machine learning.

Becoming a successful entrepreneur usually requires a setback, if not a few, that one would have to overcome and start anew, and Al Gergawi went through a distressing experience of his own in 2012 before launching The Delma Institute in Abu Dhabi. "Through a failed business venture that I was involved in, I personally went into significant debt in 2008," Al Gergawi says. "For several months, it felt like I would never get out of that situation. It changed me in various ways, including building my inner strength and patience, reorienting my perspective of time, and my relationship to money. It really sucked, but I don't think I'd be here if it didn't." In his time leading The Delma Institute, Al Gergawi was at the helm of a company providing insights on West Asia and North Africa to governments and corporates. "I learned a lot about communication, recruiting and managing people, and fiscal discipline," Al Gergawi recalls. "One of the most counterintuitive things is that more people equals more productivity. At Delma, we were consistently investing our resources into expanding the team, which meant we were always onboarding new people, which, in retrospect, was very time-consuming, and reduced productivity and momentum." 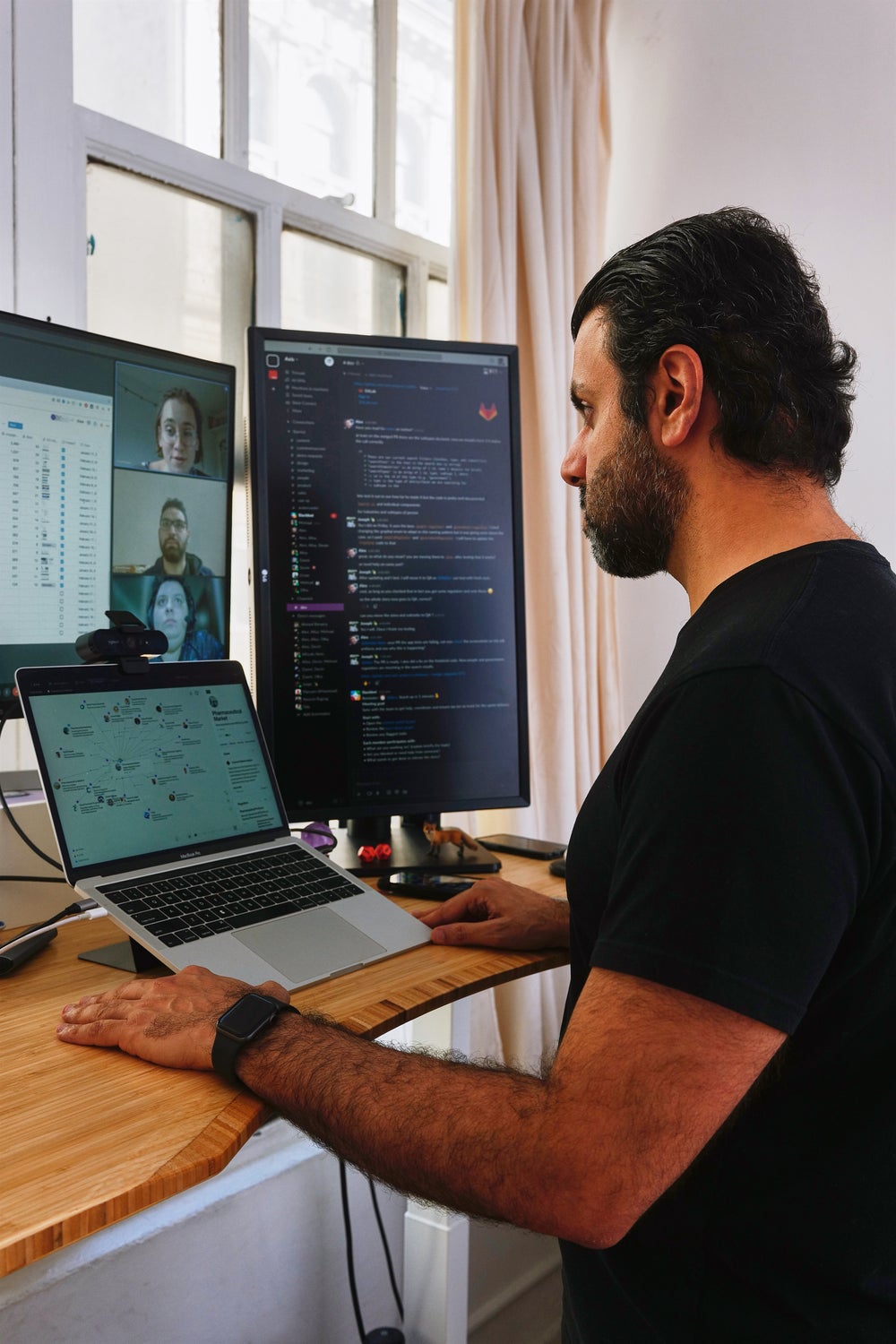 He took this lesson with him when building his next business, and as a result, Axis today maintains a small team and low burn rate, as the team continues to iterate the product in line with user feedback. Al Gergawi adds that The Delta Institute was a true precursor of Axis in a more literal sense as well. "In my banking days, I saw how the Bloomberg terminal was the go to place to get varied data on financial markets, e.g. bonds, derivatives, stocks, commodities, and so on, which are mostly quantitative data," he explains. "At Delma, we advised governments and corporates on developments in the region, and this was a very qualitative type of work, i.e. reports and presentations. So, I had an epiphany that perhaps there was a technology-enabled version of what we did. Perhaps, we could build a Bloomberg terminal not for hedge funds but for companies. A terminal that would capture not just financials and news, but also other information, like bilateral relationships, government bodies, regulatory ecosystems, competitive landscape, and industry trends– all, in a single place, through a visual interface that mirrors how our mind thinks about these issues, and with tools, like search, filter, bookmark, export, chat, and many others, that we plan to launch this year."

To further explain the premise of Axis, he adds that executives in companies today check their email inboxes to find out what happened inside their companies, but when it comes to anything outside of them, they don't have an obvious and comprehensive place to look toward. "We want Axis to be that to them," Al Gergawi says. "We want to be their operating system that allows them to consume the world according to them–with trust, delight, and agency." Insisting on a lean approach to building a business, Al Gergawi points out that the Axis team became 14-people-strong only very recently. "For most of the company's life we've been a handful of people tinkering away," he adds. This approach was especially propitious when Al Gergawi had to navigate his startup through the fallout from the COVID-19 pandemic. "The COVID-19 period was both good and bad for Axis," he says. "On the positive side, due to people working from home, we were able to talk to a lot of users who'd probably be a lot less available pre COVID-19. On the other hand, COVID-19 really froze budgets and decision-making capacity, so that slowed down growth."

Having experienced building a business in the UAE and now in New York, he finds the two ecosystems very different. "Two specific juxtapositions are that New York City is chaotic, while Abu Dhabi and Dubai are orderly, and that New York City's public sector plays a much smaller role in shaping the city than Abu Dhabi and Dubai's public sectors do," he says. At the end of the day though, Al Gergawi says that the UAE will forever remain "his home," and therefore, he highlights his bias when sharing his thoughts on on the UAE as a place to do business. "Everything that I am, and what I have brought to New York, was forged there," he says. "My hustle, curiosity, ideas, and perspective comes from being a citizen of a young country that achieved so much in so little time with no preexisting credentials beyond hard work and clarity of vision. I carry that with me every day; I want to be like my country!"

In the UAE, entrepreneurial opportunities are infinite, he notes. "At the very base of it is building incredible experiences for consumers in the region who grew up with the internet and understand what their peers in other markets are getting," Al Gergawi says. "The MENASA region is so young and is so excited about the future. Specifically, markets like Egypt, Saudi Arabia, and Pakistan are very exciting due to their size and urbanism."

In conclusion, when asked to share his advice for entrepreneurs keen on seizing those aforementioned opportunities, Al Gergawi replies that one thing that will work out in their favor is for them to always think of the user of their products or services, and define them in the narrowest way possible. "It will help you to understand how to really rock their world," Al Gergawi explains. "You don't want your product to be liked or considered interesting; you want it to be loved and needed."

1. Figure out your users "Develop a very deep understanding of who your user is and, very specifically, how their life can improve if they used your product."

2. Get the right people around you "Start a company with people you really intellectually like and ethically respect."

3. Raise revenue instead of funds "Raising venture capital and spending it is not impressive; making revenue with a small team is."

5. Maintain your mindset "Statistically, your startup will fail- but there is a tiny chance that with enough (nobody knows how much!) hard work and some luck, you could make a dent in some specific universe. The world isn't rooting for your success or failure; actually, most of the world isn't aware of you. So, be strong, push hard, and don't take setbacks personally."