By Prajakta Kharkar April 15, 2022
Opinions expressed by Entrepreneur contributors are their own.
You're reading Entrepreneur Middle East, an international franchise of Entrepreneur Media.

Thanks to Saudia Airlines and the tourist visa that Saudi Arabia now offers as part of its efforts towards realizing Vision 2030, my family and I were recently able to walk in the footsteps of ancient travelers on the Incense Route, and experience firsthand the richness of the Arabian culture. And during this journey, as an economist and frequent advisor to founders of startups, I couldn’t help but wonder: what would a founder from such a culture based on warmth and respect be like? Would their startup be different than the products of sheer capitalism that we’ve come across everywhere else? Would their startup be more beautiful?

The warmth that comes so naturally to people in Saudi Arabia was discernible right from the start. We took a walk by the corniche, the morning after we reached Jeddah. Arab elders relaxing by the water simply complimented us on our daughters frolicking like butterflies. I did not get any disapproving looks for not wearing an abaya or a headdress; the overall feel was that of easy, welcoming hospitality. Unassuming kindness reflected in every interaction we became part of in the days to come.

For instance, it was fascinating when our stargazing guide in Gharameel, driving up ahead of us, went out of his way to buy chocolate milk and fine cookies for our girls, so that they don’t starve in the remote desert as we read the heavens. In hindsight, such a sublime experience interrupted by “hangry” kids would have been an utter loss. Instead, we were able to create a once-in-a-lifetime memory, thanks to this young Saudi man’s generosity. If he were a founder of a startup, could he possibly build products that hurt his customers’ greater wellbeing? Definitely not.

Meanwhile, Atif Alboulawi, a historian-geek-archaeologist all rolled into one, gave us a private tour of Hegra, the UNESCO World Heritage site in AlUla, Saudi Arabia. Narrating a 2000 year long history of this Nabatean city, Atif made sure to treat my daughters as our equals at all times. He took care to highlight to them that the candied ginger they were eyeing was “sweet, not sour, don’t worry,” or patting their heads ever so gently when they answered his questions well. This was clearly not part of any standard, customer service training for tourist guides. Instead, as I gleaned from Atif’s stories about his son, it is with this much care that he treats all kids, adults, wildlife, and even sandstone. I wonder if an entrepreneur cut from the same cloth as Atif could create a startup that churns out profits at the expense of the environment? I wouldn’t think so. 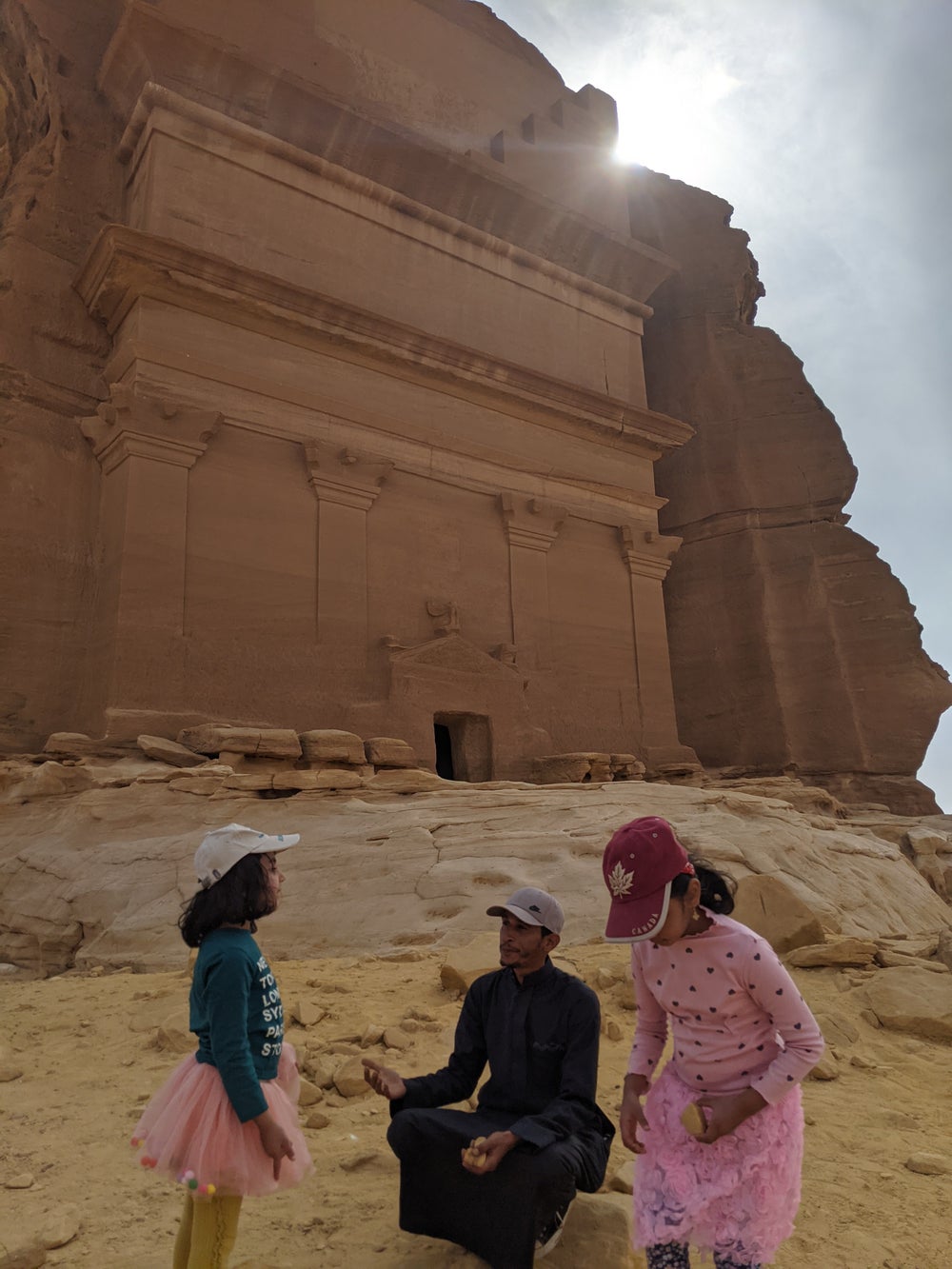 Despite the recent reforms for women’s rights in Saudi Arabia, many well-meaning relatives and friends were concerned when they heard I was making travel plans to the country. And yet, when I boarded my flight, much to my pleasant surprise, the captain flying our plane was a lady. Upon landing, all the immigration officers and the police officers at the immigration area were local Saudi women, who made friendly conversation with my daughters while collecting their delicate fingerprints. When we were about to depart AlUla, my daughters and I were sent through to a designated ladies-only security room. Initially, I found it regressive that something as mundane as security checking needs to have a separate section for women. Once inside though, the experience won me over. A graceful Saudi lady dressed in the officers’ uniform respectfully checked my daughters and me using metal detectors, in the complete privacy of this large, well-lit room. The glamorous crest on her hat and her friendly demeanour left an impression. Finally, she sent my daughters off with a lollipop each. They felt pampered, and for a mysterious reason, I felt like royalty!

This unusual security experience made me think: could the ethos underlying Saudi Arabia’s over-protective treatment of women be consciously used to create dignified experiences for women in the workplace and beyond? It takes my mind back to a startup I founded a few years back, the Joey app. My app helps new mothers in Toronto and Vancouver locate the nearest nursing room, and plan their baby’s next meal based on reviews of other mothers who’ve recently used the space. Now that I think about it, that startup idea could very well have come from a Saudi Arabian founder.

Such gestures of generosity and warmth by the people of Saudi Arabia were not a result of following some social code of politeness. They are ingrained in the country’s culture and people, such that warmth and a measured respectfulness comes through in their day-to-day interactions. From the vantage point of a well-traveled foreigner, this is Saudi Arabia’s unique DNA. And from the point of view of economic policy, I can see “values” becoming this country’s key distinguishing factor in attracting and nurturing a different breed of entrepreneurs and startups. 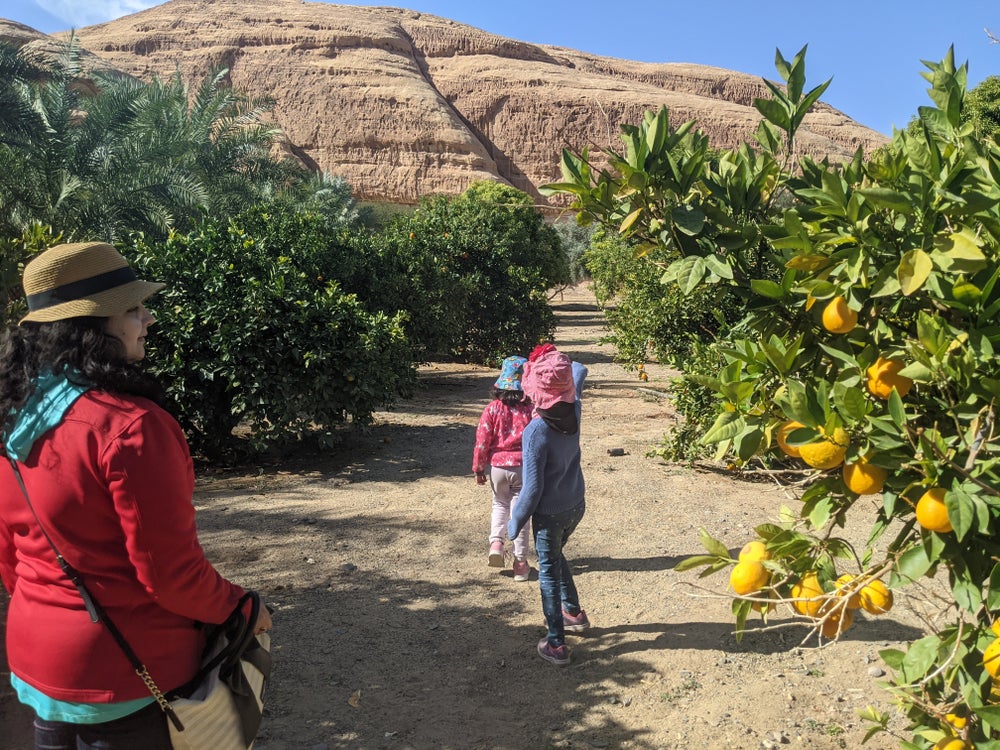 Cultural values such as hospitality, warmth, and generosity would attract startup ideas and founders who resonate with this uniquely Saudi ethos. With its abundant financial resources, land availability, state-of-the-art information and communications technology (even in the smallest of towns), and an eager market that is opening up to the world, the Kingdom could become an attractive incubation space for socially conscious entrepreneurs within the country and from around the world. Yet, what remains to be seen is, would entrepreneurs from Saudi Arabia and those coming here embrace this ethos, or would they take the beaten path and follow a largely Western startup culture of growth-at-all-costs?

Could we perhaps have a refined, more cultured version of commerce in Saudi Arabia? A clue to answering that question is hidden, once again, in our experiences of the country’s hospitality. On our third day in AlUla, we wandered about to one of the many date and citrus farms that this region is well-known for. Unlike in North America, we could not see any fences, and certainly, no cashier tills to ensure that visitors paid for the produce they collected. We asked the only person who lay reclining on one of the daybeds nearby what the farm rules were and whether we could enter.

He turned out to be the owner of the large farm, and he invited us to wander through his farms, and to eat as much fruit as we would like, straight off the trees. All on the house! He was as surprised by our question, as we were by his generous response. I imagine a co-working space for entrepreneurs amidst one such farm, with high speed Wi-Fi, and where a team of founders is free to take a stroll through rows of date palms and citrus trees, mull over their latest idea, while absentmindedly plucking and eating juicy oranges. Quite a conducive environment to think beyond conventional business models, isn’t it? With its age-old culture of welcoming people, and drawing upon its abundant resources, Saudi Arabia may be poised for incubating a new type of entrepreneurship.