The Canada-based functional materials and nanocomposite products developer Meta Materials (MMAT) has achieved strong topline growth in its most recent quarter, with its revenues increasing a whopping 399% year-over-year. Furthermore,...

By Subhasree Kar May 26, 2022
This story originally appeared on StockNews

The Canada-based functional materials and nanocomposite products developer Meta Materials (MMAT) has achieved strong topline growth in its most recent quarter, with its revenues increasing a whopping 399% year-over-year. Furthermore, MMAT recently announced its first U.S. patent granted for a non-invasive glucose sensing system, which has propelled the stock higher over the past month. However, with the company's bottom line still in the red, will the stock's price gains be sustained? Keep reading to learn our view.

MMAT shares have slumped 63.3% in price over the past year and 31.7% year-to-date to close the last trading session at $1.68. However, the stock has gained 26.3% over the past month, driven, apparently, by optimism around its first granted U.S. patent for a non-invasive glucose sensing system and topline growth in the last reported quarter. 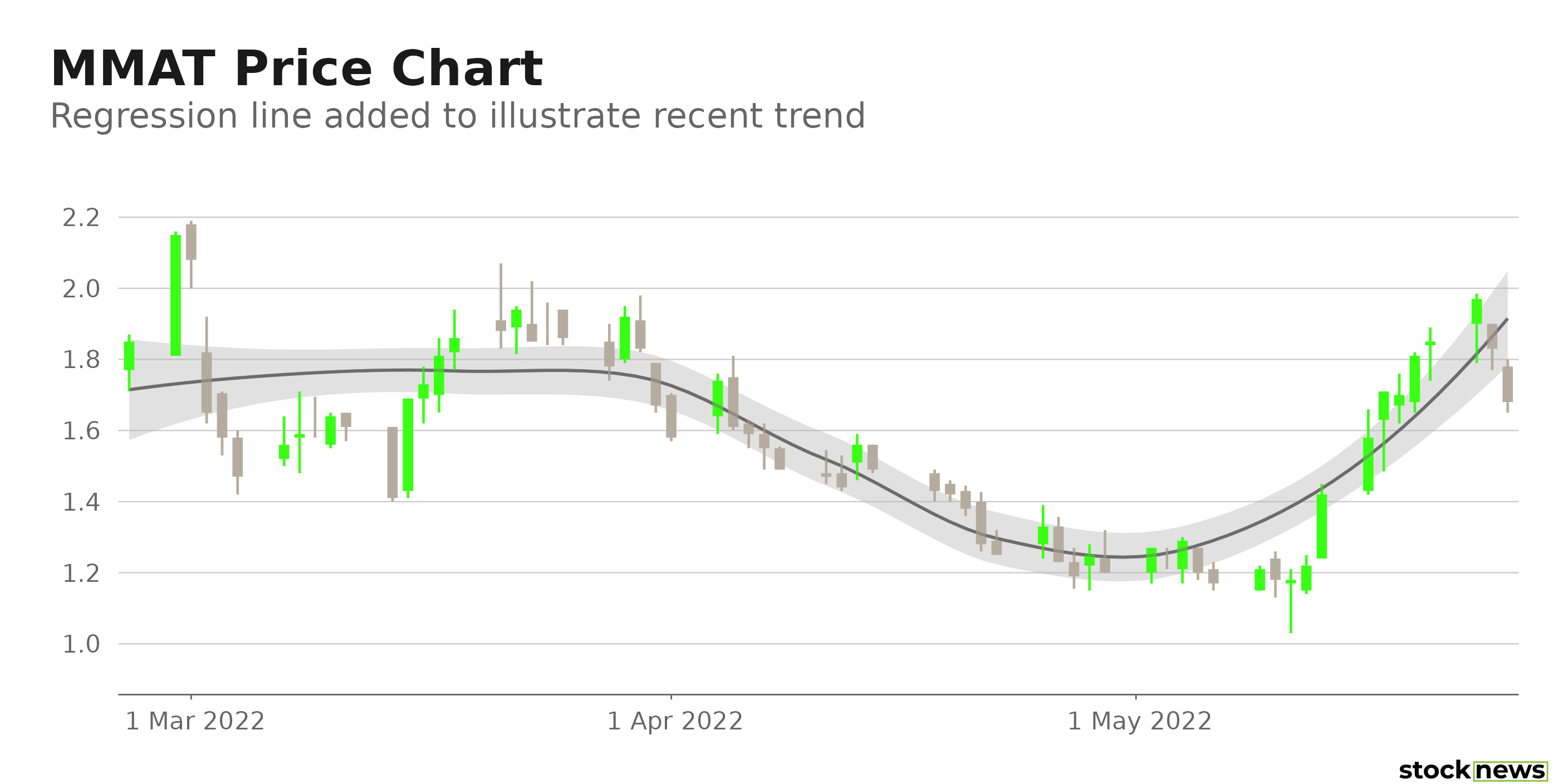 Earlier this month, the company announced that its wholly owned U.K. subsidiary, Medical Wireless Sensing ("MediWise"), had been granted the first U.S. patent for its glucoWISE® non-invasive glucose sensing system and related anti-reflection metamaterial films. This marks a significant milestone in the company's business trajectory. "META's broad and rapidly growing intellectual property portfolio is a key element of our strategy to support growth and establish a durable competitive advantage," said George Palikaras, President and CEO.

Here is what could shape MMAT's performance in the near term:

Bottom Line is in the Red

The weighted average number of MMAT's shares outstanding was 285.22 million for the quarter, compared to 168.86 million in the first quarter of 2021, indicating considerable stock dilution.

MMAT has an overall F rating, which translates to Strong Sell in our proprietary POWR Ratings system. The POWR Ratings are calculated considering 118 distinct factors, with each factor weighted to an optimal degree.

The stock has an F grade for Quality, which is consistent with its bleak profitability.

MMAT also has an F grade for Value. Its stretched valuations justify this grade.

Among the 48 stocks in the C-rated Technology - Electronics industry, MMAT is ranked #46.

Beyond what I have stated above, one can also view MMAT's grades for Sentiment, Growth, Momentum, and Stability here.

View the top-rated stocks in the Technology – Electronics industry here.

While the company might be poised for substantial growth over the long run, its current bottom line positioning does not look great. Moreover, analysts expect the company's EPS to remain negative at least this year. And although the stock managed a rally over the past month, the sustainability of the gains is questionable. Thus, I think it could be wise to wait for further development in the company's business trajectory and avoid the stock now.

How Does Meta Materials Inc. (MMAT) Stack Up Against its Peers?

While MMAT has an overall POWR Rating of F, one might want to consider investing in the following Technology – Electronics stocks with an A (Strong Buy) rating: Wayside Technology Group, Inc. (WSTG), CTS Corporation (CTS), and Avnet, Inc. (AVT).

Note that AVT is one of the few stocks handpicked currently in the Reitmeister Total Return portfolio. Learn more here.